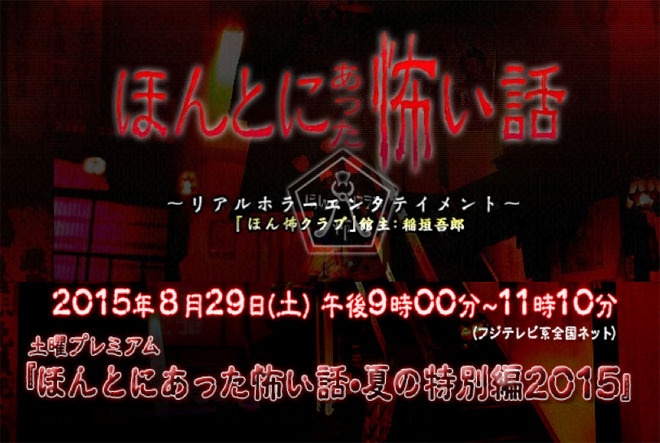 Doko Made mo Tsuitekuru
Story: Suzuki Shota (Tamamori Yuta) cannot fit into his job and returns to his hometown from Tokyo. Shota’s childhood friend Hayase Tomomi (Tanimura Mitsuki), who has feelings for him, is delighted about his homecoming, but baffling phenomenon keeps happening around Shota. A figure can be seen in a place where no one should be present, Tomomi’s present of a mug suddenly shatters … … One day, when Shota comes back to his parents’ home, there are cones of salt placed by the entrance and room for good luck. His mother (Ito Ran) falters when he asks for the reason. Even after that, the mysterious events continue, and each time, a woman dressed in white appears … … Who is this lady? Then, Shota’s past is made known … …
Cast: Tamamori Yuta, Tanimura Mitsuki, Ito Ran

Tsukiatari no Kazoku
Story: Takayama Norio (Matayoshi Naoki) runs a restaurant and is even casually told by customers to have a family. But the “restaurant and cooking are his family”, and he tries to stick to being a bachelor. One day, when Norio returns to his own apartment, he catches sight of a man heading to the house at the end of the corridor and this gives him comfort. “I’m not the only one who is working hard.” Norio also happens to see that man’s family together. Around the time they exchange greetings and Norio walks out from the room, they seem to be moving to the very last house down the corridor. When he tries to ask the landlord, the hidden truth about that family is revealed … …
Cast: Matayoshi Naoki

Arashi no Naka no Tsuuhou
Story: One rainy night, when police officer Toyomura Shuichi (Saito Takumi) returns from a patrol, the fixed-line phone in the police box rings. He answers, but no one speaks. There is only the sound of distant noise. Shuichi learns that a woman was murdered nearby because of an incoming call from headquarters. Even after that, the phone calls where he can only hear static continues. However, on the day Shuichi stays over at the police station for night duty, finally … …
Cast: Saito Takumi

Kuroi Nichijou
Story: Kimura Mitsuki (Takanashi Rin) switches jobs and keeps failing in work that she is unaccustomed to. She makes silly mistakes which she continues to repeat. At the point she falls into a spiral of negativity, what should take at most 10 minutes when she goes to a client company to deliver documents turns into an unfathomable experience of more than five hours. What is happening to her? The spine-tingling, shocking truth is revealed.
Cast: Takanashi Rin

Kankyaku no Yashiro
Story: Iida Mami (Nakajo Ayami) keeps having dreams of wandering in pitch black darkness. She had initially enjoyed seeing the same dream. But one day, Mami finds her way to a small wayside shrine in total darkness in her dream and inside the shrine is … … A terrible situation hits her.
Cast: Nakajo Ayami

Kiki Kaikai Joshiryou
Story: Yamagishi Hiromi (Mizuki Arisa) is forced to live in a dormitory because of some circumstances. She feels something is wrong with her own room which has a musty air, and when she touches the tatami, it is cold and wet even though there has not been a leak. Her dormitory life always has baffling incidents such as being cryptically told by a neighbour (Ito Shuko) whom she should be meeting for the first time, “You’ll be quiet this time, won’t you.” Hiromi and her colleague Kaneko Makoto (Adachi Rika) give each other support while working hard, but colleagues leave the dormitory one by one. What is Hiromi’s destiny?
Cast: Mizuki Arisa, Ito Shuko, Adachi Rika

This blog contains information and musings on current and upcoming Japanese dramas but is not intended to be comprehensive.
View all posts by jadefrost →
This entry was posted in Fuji TV, Summer 2015 Drama Specials and tagged Honto ni Atta Kowai Hanashi Series, Mizuki Arisa, Tanimura Mitsuki. Bookmark the permalink.