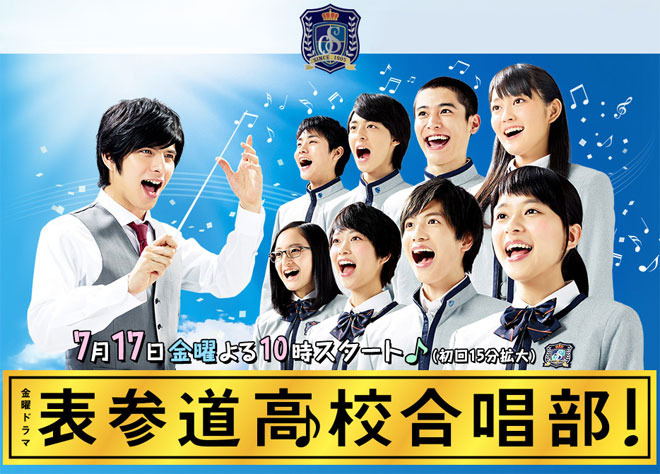 Story
Kagawa Makoto has transferred to Omotesando High School in Tokyo from Kagawa Prefecture. Devoted to the choir when she was in Kagawa, Makoto is intent on being active in the prestigious school choir too. Moreover, the fact that Suzuki Ariake, the teacher who had once taught her the joy of singing in a choir is its adviser, fills her with anticipation. However, she discovers on her first day at the school that the choir’s glory is a thing of the past. Now, it has hardly any members and is on the verge of being disbanded. Even the president of the club, Aiba Kentaro, is passive about its fate. He and a member, Sasaki Yoshiko, irresponsibly blame everything on Ariake. Makoto remembers Suzuki as someone who loved choir singing from his heart and taught students with enthusiasm. But the person she meets again is dissipated and only has interest in hostess bars and gambling. Despite her shock at seeing the change in Ariake, Makoto has a “goal” that she must achieve at the school choir where her parents once spent their youth. She makes up her mind to turnaround the choir. Learning that eight members are required for the club to keep going, Makoto braves hostility from the students around her and pushes ahead with rounding up members. Then she is told by a classmate, Hikita Rina, that there are clear divisions between the students at Omotesando High School – “First Army”, “Second Army” and “Out of Range”. Popular, handsome Natsume Kaito and Tani Yuria, who has been scouted by a talent agency, have made the most of their school and private lives. They are the “First Army”. Students decent in their studies and club activities such as the baseball club’s Sakuraba Daisuke belong to the “Second Army”. Geeks, unspectacular students, choir members Aiba and Yoshiko, a truant Miyazaki Tasuku and others are classified “Out of Range”. Rina who has worked hard to be in Yuria’s inner circle, and just barely kept her position in the “First Army”, advises Makoto not to get involved with the choir. However, Makoto’s reply is … …

Characters
Yoshine Kyoko as Kagawa Makoto
A high school student who has transferred from Kagawa Prefecture to Omotesando High School. She loves choir singing and belonged in the choir in junior high school and high school. When she was an elementary student, she was taught how wonderful choir singing is by Suzuki Ariake who had come on teaching practice. Her parents have grown estranged because the business of the udon shop ‘Kagawaya’ which her father, Yuji, runs is on the decline. Her mother, Minayo, has decided to move to Tokyo where her family is. She is earnest, unassuming and stubborn. She is also clumsy and unable to read situations to a certain extent. When she is feeling worried or depressed, she will do the “10-second jump” which her grandfather taught her to energise herself before it gets her down.

Shison Jun as Natsume Kaito
A classmate who belongs to the “First Army”. He wears an affable, easy-going mask, and is one of the popular guys of his school year. He has a close relationship with his childhood friend Tani Yuria and he treats her like a younger sister. On the other hand, he has a keen interest in Kagawa Makoto whose personality he finds fun and she starts to be on his mind. He is actually suffering from some illness and does not have the courage to undergo surgery recommended by the doctor. Because of that, he has given up on having dreams for the future and having good friends.

Yoshimoto Miyu as Tani Yuria
She is clever, beautiful and has good communication skills. Idolised by the people around her, she is the leader of the “First Army”. After she was scouted by a talent agency, her popularity has become unassailable. But lately, she has been feeling suffocated by the talent activities and starts to question if this is really what she wants to do. At that moment, the interest that her childhood friend Natsume Kaito has started to take in the free-spirited Kagawa Makoto gets on her nerves and she treats Makoto like an enemy … …

Morikawa Aoi as Hikita Rina
Both her looks and grades are mediocre, but she is good at pick up the mood around her and bringing humour to situations. She has narrowly managed to secure a place in the “First Army” as someone useful. In fact, she wishes to be an idol. But because her first consideration is whether she will do all right in her school life, she does not talk about her own dreams. However, she meets Kawaga Makoto and is shocked to see her doing things her way.

Horii Arata as Sakuraba Daisuke
A classmate who belongs to the “Second Army”. A member of the baseball club. Although he got into the high school on a baseball recommendation, he has been on the bench for eternity after an injury. He recently lost out to a junior for a regular place. In his heart, he realises that he has reached his limitations as a sportsman. But he cannot give up because of his father’s expectations and his fear of suffering setbacks. He is invited to the choir by Kagawa Makoto who has noticed that his rich voice, but … …

Takasugi Mahiro as Miyazaki Tasuku
A member of the choir who has not bee attending school. Naturally he belongs to “Out of Range”. He was educated at the same junior high school as Sakuraba Daisuke, and they used to be good friends. But some incident led to him being ostracised by the people around him. He no longer felt comfortable in school and ended up withdrawing from the outside world. He is only a member in name now. Kagawa Makoto appeals to him in an attempt to get him back so that the the choir can continue, but he rejects the members including the president, Aiba Kentaro. What exactly happened?

Shirota Yu as Suzuki Ariake
His love for choir singing developed into a career as a music teacher. He was chosen to be the music teacher of Omotesando High School because of this passion and became an adviser to its choir. He had constantly guided the club to the top ranks with his leadership and enthusiasm. But some incident led to his present interest in hostess bars and gambling, and he has become a useless teacher mired in debt. However, his passion for music and choir singing still lurks inside, and he has a different look in his eyes when asked by Kagawa Makoto to teach choir singing and arrange music and when involved in music.

Takahata Atsuko as Osone Tokuko
The principal of Omotesando High School. She is a generous and tolerant person. She places emphasis on the autonomy of students and quietly watches over their respective activities. She had once been a music teacher and was the adviser of the school’s choir at the time Kagawa Makoto’s parents, Yuji and Minayo, were members. Suzuki Ariake was her junior in the university’s choir and she was the one who brought him over as a music teacher. She knows he is hurt and is deeply concerned about him. She wishes that he will have hope again and mentor the choir.

Episodes
#1: Performing Miracles with the Power of Songs
#2: A Tearful Chorus ~ The Wings of Truth Please
#3: A Father & Child’s Promise … A Miracle at the Baseball Stadium!! Soulful Supporters’ Song
#4: Goodbye Teacher A Tearful Choral Medley
#5: Saved by Songs! The Fall and Tears of the Masked Queen
#6: Sakamoto Kyu’s Famous Song “Kokoro no Hitomi” Tears at the Love of a Couple that Transcends Space and Time
#7: The Secret Love in the Dogwood Flowers
#8: Miraculous Performance with Nakashima Mika! I Miss the Passionate Singing
#9: A Teary Best Song … Taking a Shot at a Dream Come True Family Reunion
#10: Wailing … A Miracle with A Legendary Love Song! A Family’s Recovery!

This blog contains information and musings on current and upcoming Japanese dramas but is not intended to be comprehensive.
View all posts by jadefrost →
This entry was posted in Summer 2015 Dramas, TBS/MBS and tagged Omotesando Koukou Gasshoubu!, Shirota Yu, Shison Jun, Takasugi Mahiro, Yoshine Kyoko. Bookmark the permalink.