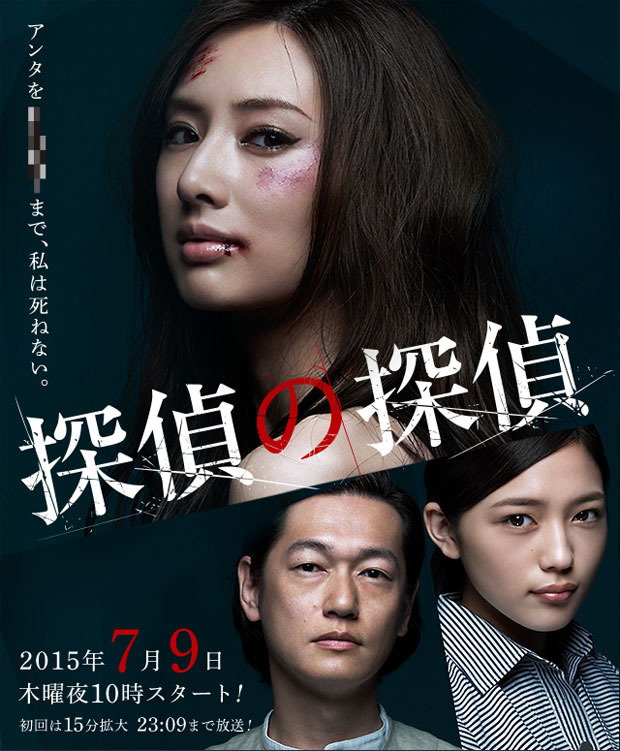 Story
Sasaki Rena is training hard with a male trainer at the training hall of the private investigation firm, Suma Research, which Suma Yasuomi heads as the company president. She is the only investigator of the newly established Anti-Investigator Department which examines and questions unscrupulous investigators. But one day, a newcomer, Minemori Kotoha, is brought over by Suma. He orders Kotoha to be Rena’s assistant, but Rena declares that she is fine on her own. At that moment, Bando Shiro, a section manager, asks a man seated with his arms crossed over his chest to investigate an incident while detectives including Kubozuka Yuma are gathered in the First Investigative Division’s meeting room. This man is the investigator, Abiru Yoshinori. The first time Rena visited Suma’s mid-sized firm was three years ago. Her beloved younger sister, Sakura, a third-year high school student, was brutally murdered by a stalker two years earlier. Learning that the criminal had used an investigator to obtain information on Sakura, Rena decided that she would also master the skills of an investigator in order to find that investigator. After completing two years of rigorous training at a training school run by Suma Research, Suma appointed Rena for the job of the anti-investigator. Burning with vengeance, Rena became an investigator. The very thing she detests. Kotoha was not successful in job hunting and has joined the firm without really thinking anything about it. As she tries to feel her way around, she embarks on an investigation of a blackmail case by a rogue investigator with Rena and quickly sees Rena’s violence with a target. However, what awaits is a dangerous assignment beyond her imagination.

Characters
Kitagawa Keiko as Sasaki Rena
An investigator’s investigator. Her beloved younger sister, Sakura, was murdered by a stalker, and she becomes an investigator in order to locate the rogue investigator (god of death) who created that opportunity. After training at the PI School for two years, she joined Suma Research. She establishes the Anti-Investigator Department, which investigates rogue investigators, together with company president, Suma Yasuomi. She runs the department as its only investigator. She is the presence of mind, keen mind and exceptional memory. She also has good physical ability and is skilled at the art of self-defence.

Kawaguchi Haruna as Minemori Kotoha
A newcomer to Suma Research’s Anti-Investigator Department. Her job hunt did not go well and she casually applied for Suma Research because she had happened to see a recruitment advertisement. She had the image of the industry as an intellectual job. But ever since she saw Sasaki Rena get involved in violence in her first assignment, she takes a dislike to the dangerous work. On the other hand, she is not bad a grasping the work of an investigator because of her diligent and amenable character. She lives with Rena in the firm’s dormitory. She adores her like an older sister and wants to be of help, but … …

Miura Takahiro as Kubozuka Yuma
A detective of the Tokyo Metropolitan Police Department’s First Investigation Division. He is an assistant police inspector on the non-career track. He is taciturn, but a righteous person with strong convictions. Because of that, he will go against the organisation’s wishes if he believes something is right. His beloved wife died and he has an 8-year-old daughter, Yuki, but he tends to place her in the care of his mother because he is very busy. He loathes the interference of private investigators in the investigation of cases because he differentiates the police as detectives and investigators as civilians. He subsequently learns about Sasaki Rena’s past and feels sympathy for her circumstances.

Dean Fujioka as Kirishima Sota
An investigator of Suma Research’s Investigator Department and plays the role of the on-scene facilitator. A graduate from the PI School’s first batch of students. His friendly and smart manner seems unlike an investigator, but he is actually highly qualified. He believes that illegal conduct is a necessary evil in the industry. He watches over Sasaki Rena who waging a one-man battle in the Anti-Investigator Department and also supports her behind the scenes. Although he is a rational and a pragmatist, he likes to act on his own and is a many of many mysteries because he does not show his true feelings.

Yoshine Kyoko as Sasaki Sakura
Sasaki Rena’s younger sister. She was murdered five years ago when she was a third-year high school student. She stayed with a relative in order to get away from her stalker and even changed schools. But she fell victim to the stalker because of information some investigator brought. Rena has been pursue that rogue investigator that caused her murder.

Santamaria Yusuke as Abiru Yoshinori
The company president of Abiru General Investigation Agency which is the leader among the top private investigation firms. Even the police has strong faith in his firm and he actively cooperates with the police in investigations. That is how he became known and he is the personification of an exhibitionist who likes to be visible in the media. He is fond of expressing his views on a case and demonstrating his knowledge in presentations before a large number of detectives. He has the ability to sense the people who have an aversion to him and tries to dispel the feeling that he is an unwelcome presence.He even seems to know about Sasaki Rena’s past … …

Takaoka Saki as Yabuki Yoko
A doctor who works in a university hospital and also serves as an expert doctor for the Aichi Prefectural Police. She was the person in charge of the DNA analysis of Sasaki Sakura who was murdered five years ago. One day, she appears in front of Sasaki Rena and tells her the shocking truth.

Iura Arata as Suma Yasuomi
He used to be an excellent investigator during his career, and is now the company president of Suma Research. He runs a PI school as a sideline. He has his own unique set of values regarding the private investigation industry together with a making a point to manage a sound company based on the industry act fast. He is also a prudent businessman. On the other hand, he has the notion that an investigator is entirely responsible for his or her actions, and he will not even intervene when Sasaki Rena is about to run into difficulty. He has experienced suffering to the extent that his own past is shrouded in darkness, and this appears to be one of the reasons why he has left the Anti-Investigator Department to Rena, but … …

Episodes
#1: The Female Investigator who Lives for Revenge
#2: A Life Targeted, A Secret Exposed
#3: The Real Criminal Appears! A Dark Night Duel!!
#4: Deadly Struggle in Fire
#5: A New Case Occurs! The Mystery of the Missing Domestic Violence Victim
#6: The Deepening Mystery … The Key Leading to the God of Death! The Two People who Shouldn’t Meet
#7: The Truth is Revealed! The Great Daybreak Scuffle! Tears Offered to a Dear Detective
#8: Start of the Counteroffensive
#9: A Written Challenge from the God of Death! Toward the Destined Confrontation with the Mastermind
#10: Toward the End of Everything! The True Identity of the God of Death is Finally Established
#11: A Sad Wish at the Point of Revenge

This blog contains information and musings on current and upcoming Japanese dramas but is not intended to be comprehensive.
View all posts by jadefrost →
This entry was posted in Fuji TV, Summer 2015 Dramas and tagged Dean Fujioka, Iura Arata, Kitagawa Keiko, Santamaria Yusuke, Takaoka Saki, Tantei no Tantei. Bookmark the permalink.

4 Responses to Tantei no Tantei