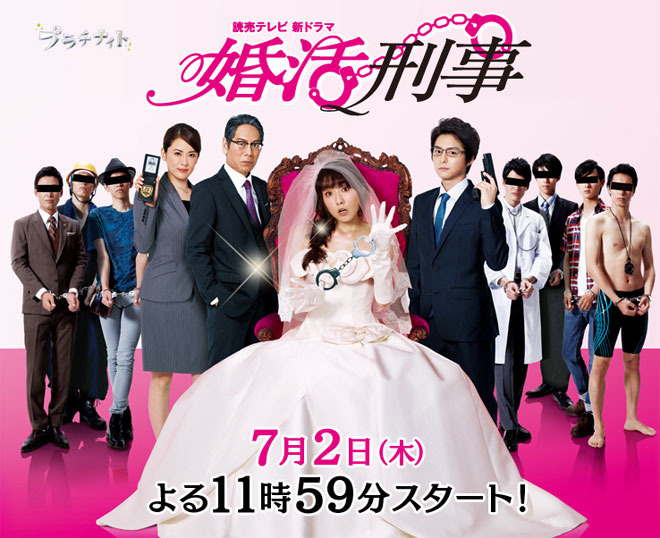 Story
After graduating from university, Hanada Yoneko joined the Tokyo Metropolitan Police Department. Recognised for her achievements at the police box where she worked at, she was transferred to Ryogoku Police Precinct’s Criminal Affairs Division six years ago. She got an usually high number of crimes solved within three years and earned the respect of the people around her. However, behind this is the existence of her special ability. The man she likes will always be guilty of crime. Yoneko has performed impressively because of this ability which is suited for a detective. However, she has no intention of using work for romance. This is her curse. Now that she is 35, Yoneko agonises over whether she will be able to get married. But she believes that her “ideal good man” will appear and busies herself with looking for a marriage partner as well as work. One day, Yoneko happens to be reunited with her high school classmate Fukuda Junpei for the first time in 17 years at a matchmaking activity. However, as she proceeds with the investigation, Junpei emerges as one of the suspects. They hit it off with each other and the distance between them starts to shrink. Around that time, a boss of loan sharks is murdered. Yoneko partners Fujioka Tsutsuji, an elite detective who has come from the Tokyo Metropolitan Police Department. She believes in Junpei. But the members of the precinct know that she likes him and feel disconcerted. Although Yoneko swings between love and justice as she pursues cases, she will not turn a blind eye to crime. In addition, she wants to be happy.

Characters
Ito Ayumi as Hanada Yoneko
A detective of Ryogoku Police Precinct who prides herself on her outstanding arrest ratio of 100%. Rank: Sergeant. In truth, she possesses the special ability to like a man who will always be guilt of crime. This special ability is named “Yoneko Radar”. While she has performed fantastically with this ability, it is a curse that she loathes. She will not turn a blind eye to crime, but she also wants to be happy. She decides to go matchmaking in order to search for a good man who does not commit crimes.

Koike Teppei as Fujioka Tsutsuji
An elite detective who is demoted from the Tokyo Metropolitan Police Department’s First Investigative Division to Ryogoku Police Precinct’s Criminal Affairs Division because of a mistake he made in a recent case. Rank: Inspector. He proceeds with investigations in a cool and logical manner. Although he does not believe in the “Yoneko Radar”, like Hanada Yoneko, he views crimes with hostility and also has a strong sense of responsibility. He looks down on Yoneko and the other members of the precinct, and clashes with them over almost anything. He considers marriage as part of business and cannot understand this thing called love.

Masu Takeshi as Miyatani Hiroyuki
The deputy of Ryogoku Police Precinct’s Criminal Affairs Division. Rank: Assistant Inspector. A veteran detective who worked his way through the ranks. He was the first person to detect the “Yoneko Radar” and makes thorough use of her romance and ability. He sometimes tails Yoneko’s dates and arrests the criminal.

Kuriyama Wataru as Takita Ryusei
The most junior detective of Ryogoku Police Precinct’s Criminal Affairs Division. Rank: Officer. He likes Hanada Yoneko. Although he is a coward, he loves justice and hates evil. He is handsome, but Yoneko takes no notice of him. Because he believes marriage is an extension of love, he cannot understand why Yoneko goes for matchmaking.

Kawamura Emiko as Yamashita Mika
Hanada Yoneko’s drinking buddy. She is having an affair with the president of a client company. She brags that she is free to love even if he has a wife. However, deep in her heart she believes his words about separating from his wife and thinks that she will marry him soon. Because of that, she somehow regards Yoneko with a condescending attitude.

Suzuki Sawa as Tsukamoto Itsuki
The head of Ryogoku Police Precinct’s Criminal Affairs Division. Rank: Inspector. The mother of a child. She rarely appears at crime scenes because she has many cases lined up. She is one of the few female seniors to Hanada Yoneko. Furthermore, because she is doing well with her family, Yoneko respects her as her superior.

Osugi Ren as Saeki Shinjiro
The director of Tokyo Metropolitan Police’s Police Affairs Department. Rank: Assistant Commissioner. He has been with police affairs since he joined the organisation and worked his way to third position. He controls the Tokyo Metropolitan Police’s personnel and is also active in internal inspections. He has established a reputation for his capabilities. He is mild-mannered and honest in his work. He cares for his subordinates and is popular. He sends Fujioka Tsutsuji who committed a mistake in an investigation, into Ryogoku Police Precinct on the pretext of a demotion.

Episodes
#1: Chance Reunion with a Classmate … An Inkling of Marriage
#2: Aiming to Marry into Wealth with Young Doctor
#3: Four Handsome Men at Culinary Group Date!
#4: The Handsome Swindler and Elopement for Love!?
#5: In a Quandary! One Night Spent with Boyfriend who is a Junior
#6: Marriage Scam! Undercover Investigation in a White Dress! The Ring Devised Trap
#7: The Man I Love is a Divorcee with a Child! I’ll be a Mother to the Hardened Child!
#8: Junior Detective’s Traitorous Sweeping Hug in Arms
#9: Goodbye Tokyo … Yoneko’s going to be a First Lady!?
#10: The End of Searching for a Marriage Partner At Last!? Love for Fellow Detective and Hidden Past
#11: A Kiss At Last! The Start of a Tearful Last Chapter
#12: The Last Confession … Yoneko Radar Gets Out of Control

This blog contains information and musings on current and upcoming Japanese dramas but is not intended to be comprehensive.
View all posts by jadefrost →
This entry was posted in NTV, Summer 2015 Dramas and tagged Ito Ayumi, Koike Teppei, Konkatsu Deka, Masu Takeshi, Osugi Ren, Suzuki Sawa. Bookmark the permalink.