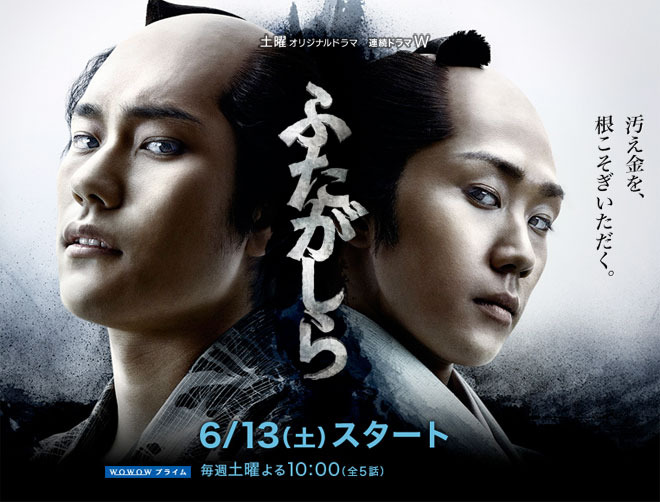 Story
The bold, magnanimous Benzo and the cool, handsome Soji work for a Hachioji courier that delivers mail or packages on foot. The other side to them is that they are thieves of a gang called Akame. The work of the Akame is to “take dirty money without threats or murder”. Benzo and Soji have a high regard for their chief, Tatsugoro, and every night they toil, slipping into the mansions of bad people with fellow gang members. But one day, Tatsugoro takes the hands of the two of them and say that he is entrusting the gang to them. Then he breathes his last. However, in the written will left in the care of Okon states that Tatsugoro’s successor is Jinzaburo, a friend whom Tatsugoro treated as a younger brother. Unhappy with this, Benzo and Soji decide to part ways with the gang and set out on a journey to accomplish “big things”. They head for Osaka with the intention of forming their own gang. Meanwhile, Jinzaburo who has become the chief of the Akame breaks the code, threatens people and steals money … …

Characters
Matsuyama Kenichi as Benzo
A cheerful, magnanimous and physically strong courier and thief. He and Soji leave the Akame and set out on a journey to establish their own gang which is the dying wish of Tatsugoro.

Saotome Taichi as Soji
A courier and thief with presence of mind and intellect. Although his cool, lady-killer personality is the exact opposite of Benzo’s, he agrees with Benzo’s desire to fulfil Tatsugoro’s dying wish.

Narimiya Hiroki as Jinzaburo
Tatsugoro’s disciple. He is named the new chief of the Akame because of Tatsugoro’s will. He possesses a cruelty that will make him do whatever it takes for money. His cover identity is a hairdresser.

Nanao as Okon
Tatsugoro’s wife. A free spirited and formidable woman. Tatsugoro’s underlings often ingratiate themselves with her. She is involved with Jinzaburo.

Kunimura Jun as Tatsugoro
The former chief of the Akame. His motto is to “take dirty money without threats or murder”. He cares about Benzo and Soji.

Kurokawa Meii as Otoki
She sells secondhand clothes. She occasionally helps the gang called Yasaka and belongs to one of its members, Kaoru. Benzo falls in love the moment he sets eyes on her.

Hashimoto Jun as Tetsujiro
The scary-looking chief of the Yasaka. He is worried about the future of his gang and has a complicated relationship with Kaoru who is an attendant of the former chief.

This blog contains information and musings on current and upcoming Japanese dramas but is not intended to be comprehensive.
View all posts by jadefrost →
This entry was posted in Spring 2015 Dramas, WOWOW and tagged Futagashira Series, Kunimura Jun, Matsuyama Kenichi. Bookmark the permalink.