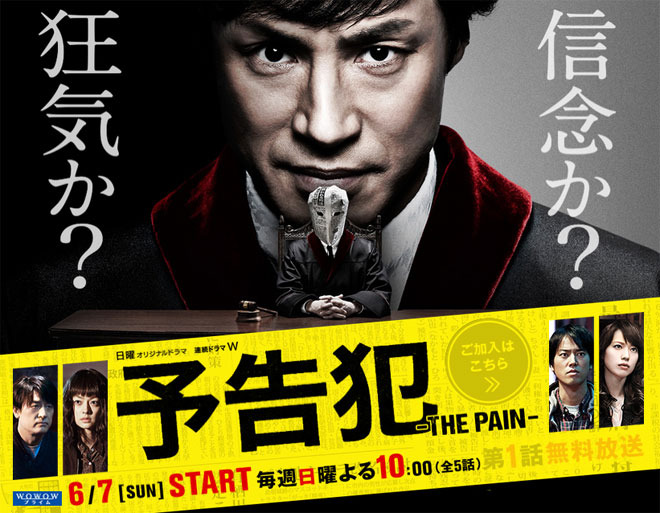 Story
Web writer Mizutani Ken, who was arrested for molest, pleads innocent at the trial, but is found guilty. He goes to an association for victims of false molest charges that he was introduced to, and encounters Sakuma Eiji, a man with an unknown background. Sakuma leads a masked group called Shinbunshi. Together with Shinbunshi members Okina Keiko and Tabuchi Yuzo, he advocates a more open trial and suggests that Mizutani make an appeal to the world to assert his innocence through a video site. A preview video of a mock trial called “public trial” is thus posted and Mizutani’s “trial” begins. But Sakuma who is presiding over this public trial is actually a sitting judge. After seeing a series of public trials, the investigation team led by Yoshino Erika of the Tokyo Metropolitan Police Department’s Cybercrime Division starts to determine the identity of Shinbunshi. Then they discover one thing in common among the people targeted as “defendants” by Shinbunshi … …

Characters
Higashiyama Noriyuki as Sakuma Eiji
The leader of the mysterious masked group, Shinbunshi. He posts video trailers on the internet of the opening of mock “public trials”. He is actually a sitting judge of the West Tokyo District Court’s Fourth Criminal Investigations Department.

Toda Erika as Yoshino Erika
An officer of the Tokyo Metropolitan Police Department’s Cybercrime Division. A detective who has been following the series of Shinbunshi cases. She investigates the truth with her unique sense of smell.

Kiritani Kenta as Mizutani Ken
A web writer. He has been wrongfully convicted in a molest case. He meets Sakuma Eiji and decides to clear his name.

Ichikawa Mikako as Okina Keiko
A member of Shinbunshi. She shares a goal and has been working alongside Sakuma Eiji. She has a secret past.

Hashimoto Satoshi as Tabuchi Yuzo
A member of Shinbunshi. He is silent, but a man of ability.

Tanaka Ryuzo as Hirasawa Atsushi
A lawyer. He brings Mizutani Ken, who wants to appeal his case, to the association for victims of false molest charges for the time being.

This blog contains information and musings on current and upcoming Japanese dramas but is not intended to be comprehensive.
View all posts by jadefrost →
This entry was posted in Spring 2015 Dramas, WOWOW and tagged Higashiyama Noriyuki, Kiritani Kenta, Toda Erika, Yokokuhan. Bookmark the permalink.