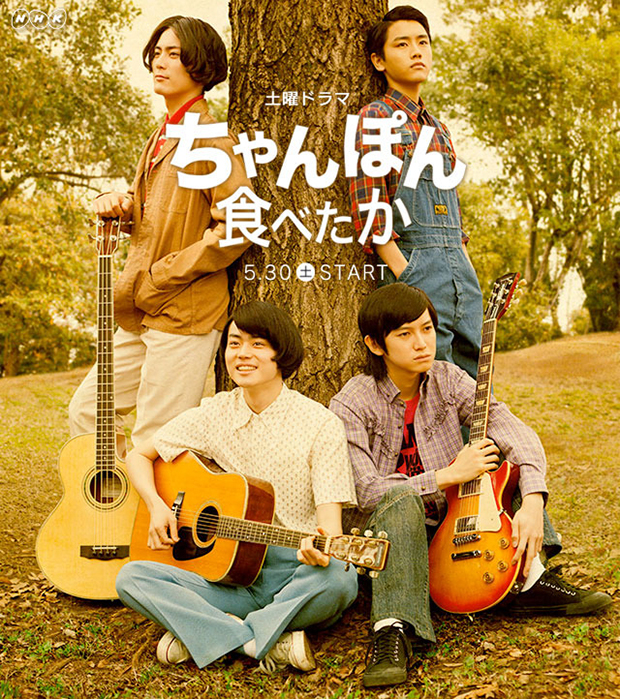 Story
In 1965, Sano Masashi, who was expected to be a violin prodigy, carried the hopes of his parents and came up to Tokyo from Nagasaki on his own during junior high school. Now a second year high school student, he practices the violin daily with the aim of becoming a top violinist. However, he could not qualify for the music school of his choice and had to enroll in a high school with a general curriculum. Masashi started to have misgivings about his own goal ever since he failed the entrance examination. Meanwhile, he finds himself having to compose an original love song for the sake of a slightly queer classmate, Kashiyama Mitsuru, who confessed his feelings to Okakura Yoko, a female classmate whom he likes, while singing Elvis Presley’s Love Me Tender. Masashi continues to work hard on the violin, but has difficulty concentrating. In the 1970s, he faces a setback during the uproar over the US-Japan security treaty. Even so, he does not cut off music. By the time Masashi realises it, he had started singing with Yoshida Masami as the folk duo called Grape … … This is a story centred around his high school and university days surrounded by different people including friends, teachers as well as older men at his part-time job.

Characters
Suda Masaki as Sano Masashi
Carrying the hopes of his parents and his hometown, he came up to Tokyo during junior high school to become a professional violinist. He has been living alone in lodgings. He has a perfect pitch and even plays the guitar. Now a second year high school student, he has started to have misgivings about his own flair for the violin and his diminishing enthusiasm is a constant source of worry. However, he has many friends and a fulfilling school life because of his naturally upbeat personality.

Hongo Kanata as Yoshida Masami
A student from another school whom Sano Masashi became acquainted with during the second year of high school. He is exceptionally good at the guitar. Although he is usually taciturn, but becomes talkative when it comes to music. Although he is serious about music, he cannot get the understanding of his parents. Because his family runs a ramen restaurant, his father is strongly opposed to him taking up music. He gets on well with Masashi and hangs out at his lodgings like Kashiyama Mitsuru. Before long, he forms a duo with Masashi and they make their major debut as professional musicians.

Mamiya Shotaro as Kashiyama Mitsuru
Sano Masashi’s classmate during the second year of high school. The bassist of the band. He and Masashi unexpectedly even became love rivals. Both of them were rejected and have been friends since then. He decides things without giving any serious consideration and has a tendency of being pushy and rash, but he is impossible to hate. Influenced by Yoshida Masami, he aspires to be a professional musician.

Izumisawa Yuki as Kikuta Yasuo
Sano Masashi’s classmate during the second year of high school. The vocalist of the same band that Masashi is in. Because he is the son of a rice dealer, he would frequently bring Masashi and the rest home and feed them rice. He is a kindhearted person who always cares about the people around him.

Nishida Naomi as Sano Kiyoko
Sano Masashi’s mother and the person who encouraged him to play the violin. She supports her magnanimous but somewhat irresponsible husband, Masato, as she manages the family’s finances including Masashi’s school fees.

Endo Kenichi as Sano Masato
Sano Masashi’s father. He used to run a timber business and was prosperous. However, when the business went bankrupt, he could not get a job. Because of his broadminded and positive character, he has faith in his son and becomes the emotional pillar of support of the Sano family despite many failures.

Episodes
#1: Far Away from Home
#2: A Small Revolution
#3: Respective Commitments
#4: Standing at the Crossroads
#5: The Meaning of Living
#6: Mother’s Tears
#7: What I Really Want to Do
#8: Goodbye, My Days of Youth
#9: The Door to Tomorrow

This blog contains information and musings on current and upcoming Japanese dramas but is not intended to be comprehensive.
View all posts by jadefrost →
This entry was posted in NHK, Spring 2015 Dramas and tagged Chanpon Tabetaka, Endo Kenichi, Ozaki Masaya, Suda Masaki, Toyohara Kosuke. Bookmark the permalink.