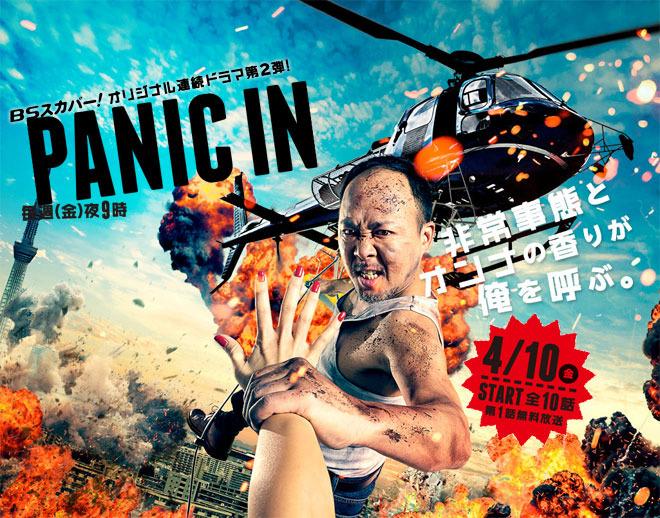 Story
Kurumada Torao is an unappealing middle-aged bachelor. One day, he is laid off by the construction company which he has worked for 20 years. He drifts from one job to the next and ends up getting involved in extremely dangerous situations at his workplaces and while travelling to or from work. Sometimes, it is a bus hijack. At other times, it is a mysterious animal or a terrorist … … However, in spite of these emergencies, there is always an encounter with a very cute beauty waiting for him each time. Torao would fall in love at first sight with her and struggle to break the deadlock of the extreme situation, with the sole purpose of wanting to be popular with her, but … …

Episode 1: The Great Express Bus Explosion
Scriptwriter: Suzuki Taichi (Tenma-san ga Yuku, Minna ESPer dayo)
Cast: Makita Sports, Fujii Mina
Story: Kurumada Torao (Makita Sports) is told that he is being laid off by the construction company which he has worked for 20 years. While waiting at a bus stop for the bus that will bring him back to his hometown, he encounters the beautiful Yuko (Fujii Mina) who is suffering from a heartbreak. After the bus that the passengers have boarded departs, a mobile phone placed in the unoccupied seat next to Torao suddenly rings. When he answers the phone, he hears a man’s voice on the other end of the line say, “A bomb has been planted in the bus.” The bomb will explode if the speed of the bus drops below 80 km. This bus hijack is revenge for his layoff. A man who has boarded the same bus as Torao and the other passengers, takes Yuko hostage in order to threaten the driver and passengers … …

Episode 2: The Silent Chef
Scriptwriter: Masumoto Takuya (White Lab, Kodomo Keishi, Nihonjin no Shiranai Nihongo)
Cast: Makita Sports, Takeda Rina, Yokoyama Kazutoshi
Story: Kurumada Torao (Makita Sports) works at Seagal, a huge hotel restaurant, with his sights set on becoming formally employed. He keeps making blunders and is worked hard by the cooks every day. His daily solace is being able to see the prime minister’s daughter, Marin (Takeda Rina), who is staying at the hotel. But one day, he is discovered in conversation with Marin by the head chef, Kode (Yokoyama Kazutoshi). Kode, who knows that she is the prime minister’s daughter, tells Torao that he has a new job for him to do. It turns out that this restaurant’s cooks are terrorists plotting to overthrow the country! They take Marin hostage and demand 1 billion yen from the government. Torao, who has been ordered to be their lookout, attempts to rescue Marin, but a bomb is rigged to the rope which restrains her … …

Episode 3: Two in the Fog
Scriptwriter: Sabu (Ten no Chasuke, Usagi Drop, Kanikousen)
Cast: Makita Sports, Aizawa Rina
Story: Rain strong enough to smash window glass pours. The next day, at the supermarket where Kurumada Torao (Makita Sports) works, customers are gossiping to one another about the puzzling storm that was not reported in weather forecasts. “It seems as if the earth is rapidly approaching the apocalypse.” When Torao is repeating what was in a magazine, the emergency siren outside the store suddenly sounds. The other side of the door is shrouded in a mysterious white fog and they can hear intense earth tremors. Amidst the chaos inside the supermarket, one of the customers, Iida Momoko (Aizawa Rina) declares that she wants to leave. She must go back home to give medicine to her sick mother. Torao’s heart is stolen by Momoko’s beauty and he steps out into the eerie fog in order to escort her home … …

Episode 4: Big Bath House
Scriptwriter: Suzuki Taichi (Tenma-san ga Yuku, Minna ESPer dayo)
Cast: Makita Sports, Kawai Aoba, Kurosawa Hiroki
Story: Kurumada Torao (Makita Sports), who works as a repair man, is asked to repair a bath and visits the home of the beautiful widow, Fujishima Satoko (Kawai Aoba). The repair is unsuccessful. Torao heads to the public bathhouse with Satoko and her son, Kenta (Kurosawa Hiroki). The bathhouse has a man like a mountain hermit serving as the attendant, the lights go out and there is a spooky atmosphere to it. After taking a bath, Torao and others hear a scream from the female bath when he is in the changing room. He rushes over and discovers that the women are entangled in a massive amount of white thread and have become immobilised. When Torao has rescued Satoko, Kenta’s cries out in the male bath this time. Someone is attempting to drag him into the bath. Torao saves Kenta and sees a gigantic eggshell over there … …

Episode 5: Torao who Leapt through Time
Scriptwriter: Nagano Munenori
Cast: Makita Sports, Fujisawa Ema
Story: Aspiring musician Kurumada Torao (Makita Sports) is unable to pay the rent and gets evicted from his apartment. He continues to pursue his dream for the sake of being reunited with Kyoko (Fujisawa Ema), the apartment caretaker who is his object of adoration. However, he has a difficult time and eventually ends up homeless. At that moment, Torao sees a person who looks exactly like him walking near a garage. Feeling suspicious, he follows the man. The man goes inside the apartment that Torao used to live in. He is Torao before he was evicted. Could it be that he has gone forward in time? From that day onwards, Torao starts to get involved in a series of incidents which he knows nothing about … …

This blog contains information and musings on current and upcoming Japanese dramas but is not intended to be comprehensive.
View all posts by jadefrost →
This entry was posted in BS Sky Perfect, Spring 2015 Dramas and tagged Makita Sports, Sabu, Suzuki Taichi. Bookmark the permalink.