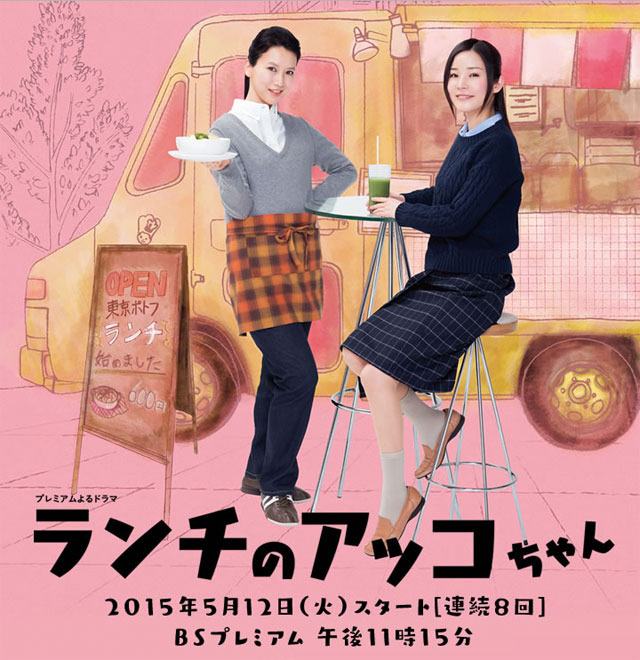 Story
Sawada Michiko has just had her heart broken by her boyfriend, Yotaro, and is depressed. A temporary staff who works for mid-sized trading company, Takashio & Co, she belongs to the Fourth Sales Department which is ridiculed as the “graveyard of capable personnel”. But to Michiko who gets along with her senior, Harada Chihiro, it is a place of work where she can feel at ease. However, the atmosphere completely changes after Kurokawa Atsuko becomes the newly-appointed department manager and quickly sacks a temporary staff for her poor method of making tea. One day at lunchtime, Michiko is about to eat her own lunch box in order to economise when Atsuko calls out and makes an unexpected proposal to her. “Exchange lunch with me.” Unable to say no to Atsuko, Michiko reluctantly complies. In doing so, she soon realises the profundity of food and starts to change. Atsuko, whom people call Akko-chan, is feared by the people around her and has extensive contacts. What is her true character?

Characters
Renbutsu Misako as Sawada Michiko
A young temporary staff who works for Takashio & Co’s Fourth Sales Department. She is earnest, but cannot say no to anything even if she dislikes it. She was recently dumped by her boyfriend and has been feeling dispirited. She brings her own lunch box every day in order to economise. That is when her boss, Kurokawa Atsuko, suggests to exchange lunch.

Toda Naho as Kurokawa Atsuko (Akko-chan)
The head of Takashio & Co’s Fourth Sales Department. She is feared by the people around her because she has an intimidating look and will not compromise when it comes to work. Her philosophy is “Eating is living” and she feels strongly about food. She proposes to exchange lunch with Sawada Michiko. In truth, she is called “Akko-chan” in several places.

Noro Kayo as Harada Chihiro
A temporary staff who works for Takashio & Co’s Fourth Sales Department. She has a kind personality and shows concern for her junior, Sawada Michiko. But a part of her is also assertive. She is thinking of quitting and starting her own business.

Narita Ryo as Sasayama Ryuichiro
The owner of Hattifnatt, a bookstore specialising in old books, which Sawada Michiko visits by chance. It is difficult to tell what he is thinking because he is aloof. But he becomes a person whom Michiko cares about.

Horiuchi Keiko as Shimizu Kimiko
The head of Takashio & Co’s Second Sales Department. She is the leader of the department’s female employees and is opposed to giving male employees Valentine’s Day chocolates.

Tsurumi Shingo as Manager Yamakawa
The head of Takashio & Co’s Publicity Department. He appears to be affable, but has quite a headstrong personality and causes Sawada Michiko distress. He used to have a deep involvement with Kurokawa Atsuko in the past.

Tayama Ryosei as Igawa Yoshio
An old man who caters okonomiyaki on the rooftop of Takashio & Co’s Fourth Sales Department. He has known Kurokawa Atsuko well for more than 15 years and in fact has a secret that Sawada Michiko does not know about.

This blog contains information and musings on current and upcoming Japanese dramas but is not intended to be comprehensive.
View all posts by jadefrost →
This entry was posted in NHK, Spring 2015 Dramas and tagged Lunch no Akko-chan, Renbutsu Misako, Tayama Ryosei, Toda Naho, Tsurumi Shingo. Bookmark the permalink.