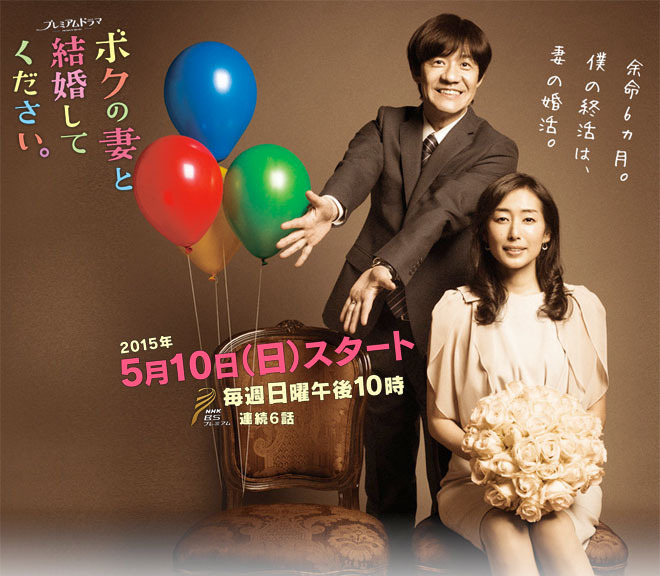 Story
45-year-old Mimura Shuji is a man who loves making people laugh more than anything else. A staff of a TV station, he has lived a life dedicated to directing variety programmes. He was recently transferred from programme production to sales. Even so, he works with a smile every day. But one day, Mimura is summoned by the hospital where he had undergone a comprehensive medical examination. He is suddenly diagnosed with pancreatic cancer and is given six months to live. He hides his illness from his wife, Ayako, and puts on a brave face. However, he wonders what a very ordinary salaryman like himself with not much savings and a housing loan can do so that Ayako and their son will keep on smiling. He hits upon the idea of searching for someone who can safeguard his own family on his behalf. Gambling all that he has left of his life, he starts this absurd yet loving scheme to search for his wife’s new marriage partner … …

Characters
Uchimura Teruyoshi as Mimura Shuji
A salesman of TV Nitto. Because he loves making people laugh, he has only cared about his work as a variety programme director which was his dream since childhood. He was recently transferred to the sales department, but at the same time finds out that he has pancreatic cancer. He thinks of his blissful life surrounded by his beloved wife and son. However, he is given half a year to live and scrambles to find his wife’s new marriage partner.

Kimura Tae as Mimura Ayako
Mimura Shuji’s wife. The person he loves the most in the world. A full-time housewife. She and her husband were high school classmates and they met while she was the manager of the baseball and he was the constant reserve. She has watched over him since back then. She arranges takes care of everything around the house with precision to give her husband and son pleasure every day. She is the bright and cheerful life of the family. She is gradually shaken by her husband’s major undertaking.

Izawa Masaki as Mimura Yoichiro
The Mimuras only son. He has become the person his mother consults at home instead of his unreliable father. A first-year junior high school student who is somewhat grown-up. He hides the fact that there is a classmate whom he likes from his parents.

Koizumi Kotaro as Saito Mitsunobu
The general hospital doctor in charge of Mimura Shuji’s medical treatment. He finds himself at the mercy of Mimura whose priority is his wife’s remarriage rather than his own treatment. But is gradually drawn to Mimura’s personal charm.

Yoshida Eisaku as Oki Hideki
An employee of a major construction company. The first love whom Mimura Ayako secretly liked when she was in junior high school. He is the perfect man. Intelligent and handsome. But he is still a bachelor for some reason.

Kakei Toshio as Tachiki Hiroshi
A director of TV Nitto. Mimura Shuji’s buddy who made variety programmes together with him. He is a family friend of the Mimuras. He has experienced several painful loves and has stayed single.

This blog contains information and musings on current and upcoming Japanese dramas but is not intended to be comprehensive.
View all posts by jadefrost →
This entry was posted in NHK, Spring 2015 Dramas and tagged Boku no Tsuma to Kekkon Shite Kudasai, Kimura Tae, Koizumi Kotaro. Bookmark the permalink.