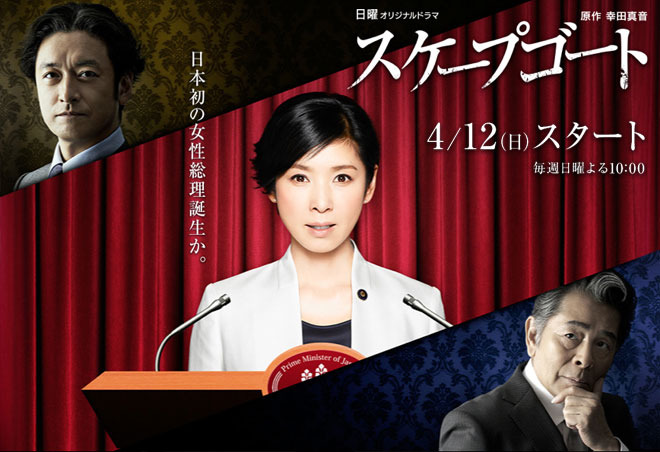 Story
Misaki Hiroko, a graduate school professor of policy science research, receives a phone call out of the blue from her former boyfriend, Yagisawa Shun, who is now a director of Tohto TV. Yagisawa has been asked by Yamashiro Taizo, the leader of Meisei Party, to introduce Hiroko and sounds her out. Yamashiro nominates Hiroko as the leader of the party’s study group because he intends to bring Hiroko in as a civilian cabinet minister with the aim of regaining political control in the next general election. Hiroko has kept a distance from politicians because of a past feud with her late father. She hesitates, not able to give Yamashiro a reply. However, several days later, an article announcing Hiroko’s appointment appears in the newspapers. This is Yamashiro’s strategy to draw her in. Unable to back out, Hiroko decides to enter politics with the support of her husband, Nobuaki. However, right after she takes office, she is faced with an unprecedented crisis. Will she be able to survive?

Characters
Kuroki Hitomi as Misaki Hiroko
A professor of Eiwa University’s Graduate School of Policy Science Research. She gets drawn into the political world by Yamashiro Taizo and as a expert in monetary economics she is elected a minister by the public. Although she wants to change the world, she struggles with her concern for her family.

Ishimaru Kanji as Yagisawa Shun
A director of the television network, Tohto TV. Misaki Hiroko’s senior in university and ex-boyfriend. He contacts Hiroko, whom he has not been in touch with since they broke up 20 years ago, and introduces her to Yamashiro Taizo.

Sasaki Nozomi as Misaki Mayu
The daughter whom Misaki Hiroko gave birth to as a single mother. A stylist’s assistant. She is defiant towards her mother.

Kobayashi Takashi as Misaki Nobuaki
Misaki Hiroko’s husband. He brought his son, Satoshi, when he married Hiroko. He supports Hiroko who struggles in the political arena as a rookie lawmaker.

Mitsuishi Ken as Higuchi Daigo
Misaki Hiroko’s father. 32 years ago, he collapsed while during the election campaign and passed away. He had a stern and stubborn character.

Nishioka Tokuma as Koseki Shiro
The secretary-general of Meisei Party. The second in command who has designs on Yamashiro Taizo’s post. He regards Misaki Hiroko as an enemy.

Furuya Ikkou as Yamashiro Taizo
The president of Meisei Party. A heavyweight politician who has his sights set on being the next Prime Minister. He recruits Misaki Hiroko for Meisei Party’s policy planning. He has a cold look sometimes.

This blog contains information and musings on current and upcoming Japanese dramas but is not intended to be comprehensive.
View all posts by jadefrost →
This entry was posted in Spring 2015 Dramas, WOWOW and tagged Furuya Ikkou, Kuroki Hitomi, Mitsuishi Ken, Sasaki Nozomi, Scapegoat. Bookmark the permalink.