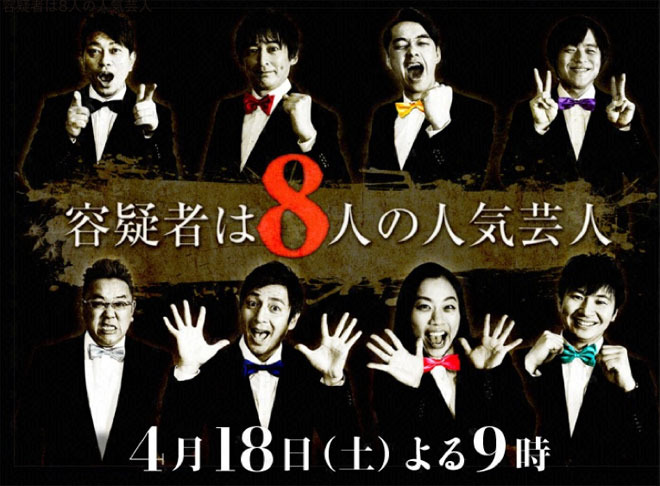 Date: From 9.00 p.m., 18 April 2015
Scriptwriters: Masaike‎ Yousuke (Leaders), Aizawa Noboru
Cast: Miyasako Hiroyuki, Hakata Daikichi, Shitara Osamu, Bakarhythm, Date Mikio, Tokui Yoshimi, Ito Asako, Wakabayashi Masayasu, Banana Man, Kinami Haruka, Cunning Takeyama, Wada Masato
Synopsis: One day, Minami Mayu (Kinami Haruka), the manager of Himura Yuki of the comedy duo Banana Man, suddenly discovers that Himura is in a critical situation. His life has been targeted and they have just a few hours to save him. Himura is appearing in the third part of the Great Escape Series on Himura Channel which is being transmitted through the internet from a secret base that Mayu does not even know about. In 9 hours and 30 minutes, he will be submerged in water. Detectives Kuroda Manabu (Cunning Takeyama) and Nikaido Atsushi (Wada Masato) from Nishi Wangan Police Precinct pursue the truth. As the investigation proceeds, eight popular entertainers, who were together with Himura for the filming of the TV programme just before that, are suspected. They are Miyasako Hiroyuki of Ameagari Kesshitai, Hakata Daikichi of Hakata Hanamaru Daikichi, Shitara Osamu of Banana Man, Bakarhythm, Date Mikio of Sandwichman‎, Tokui Yoshimi of Tutorial, Ito Asako and Wakabayashi Masayasu of Audrey. The suspects’ alibis, feelings toward Himura and motives for committing the crime are gradually revealed by the detectives. And Himura’s true self comes into sight. Who is the criminal?
Official Website: www.fujitv.co.jp/ninkigeinin

This blog contains information and musings on current and upcoming Japanese dramas but is not intended to be comprehensive.
View all posts by jadefrost →
This entry was posted in Fuji TV, Spring 2015 Drama Specials and tagged Yougisha wa 8-nin no Ninki Geinin. Bookmark the permalink.