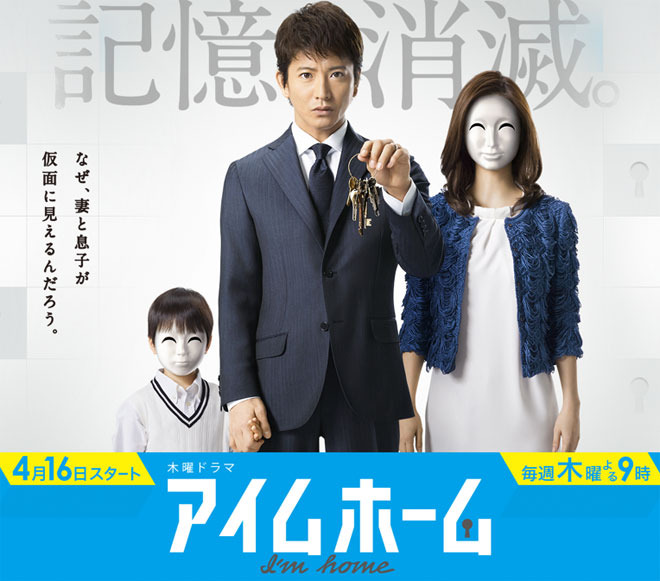 Story
Ieji Hisashi was involved in an explosion that occurred in a town during a job assignment away from his family, but miraculously returns to life from a 3-month coma. However, he is told by the brain surgeon, Tsukuba Yoshiaki, that he is suffering from higher cerebral dysfunction due to the effects of the accident and has a fuzzy memory of the recent five years. He used to have a glamorous life as a sales representative for a securities company, but the damage to his brain has also affected his work. He is transferred to the unimportant Thirteenth Sales Department from the star department, the First Sales Department. Hisashi has to live a corporate life that is a stark contrast to the past. The only things he has left are dim recollections and a mysterious bunch of 10 keys. “Even so, I have my dear family,” he tells himself. He unlocks the door and steps into an empty house in a quiet residential neighbourhood. It suddenly starts to rain. He hurriedly takes in the laundry and when he is ironing the clothes, his daughter, Subaru, and “ex-wife” Kaoru, return. They are alarmed that he is here. This is the house where Kaoru, whom Hisashi divorced five years ago, and Subaru live. It is not Hisashi’s home any more. Because of his fuzzy memory and forgetfulness, Hisashi writes down things that occur daily in a diary as he tries to retrieve the past little by little. However, he is occasionally under illusion that his routine more than five years ago is the existing reality. This time, he ended up coming back home to Kaoru and Subaru. He hastily hands back the key and heads for the house he should return to where his current family waits. It is an ordinary home where he lives with his wife, Megumi, and their 4-year-old son Yoshio. However, Hisashi sees the faces of Megumi and Yoshio as masks. He can neither tell their facial expressions nor their emotions, let alone his love for them. This distresses him. On the other hand, he feels love for Kaoru and Subaru. What sort of days did he have in those five years which are a blank to him? Hisashi decides to set out on a journey to find his past self, relying on the bunch of keys that he has. He becomes aware that he was a cold, career-minded man before the accident while he visits people connected with his past. The persona that is gradually revealed is beyond the imagination of his present kindhearted self.

Characters
Kimura Takuya as Ieji Hisashi
A salaryman who works for Aoi Imperial Securities. His memory of the recent five years is fuzzy because of an accident during a job assignment. He used to be a super elite, but is transferred to an unimportant position at Thirteenth Sales Department after the accident. He is kindhearted and a good cook now. But before he lost his memory, he was a very ambitious and hard-nosed man who would have no qualms about quashing a person. After the accident, he sees the faces of his wife, Megumi, and their son, Yoshio, as masks and does not know if he loves the two of them. He remembers his ex-wife, but … …

Ueto Aya as Ieji Megumi
Ieji Hisashi’s current wife. The daughter of a wealthy man. In Hisashi’s eyes, she seems to be wearing a mask. She has a bright personality and has been devotedly supporting Hisashi who sustained serious injuries because of the explosion. She is also actively involved in their son’s education and busies herself with exam preparations. The present Hisashi cannot recall why he married her or what kind of married life they have had.

Mizuno Miki as Nozawa Kaoru
Ieji Hisashi’s ex-wife. A magazine writer. She is puzzled that Hisashi sometimes confuses her and Subaru for his current family because of his memory loss. The mysteries of why she married and divorced Hisashi are gradually revealed.

Tanaka Kei as Honjo Tsuyoshi
The coach of the soccer club which Ieji Yoshio belongs to. He for some reason cares about Yoshio, who loves soccer. Before long, his connection with the Iejis … …

Suzuki Kosuke as Watanuki Shinji
A staff of Aoi Imperial Securities’ Thirteenth Sales Department which Ieji Hisashi has been transferred to. He used to work hard, but now has no motivation. There is a reason why he has a tendency to miss work … …

Arai Hirofumi as Kuroki Jin
The ace of Aoi Imperial Securities’ First Sales Department. He is a junior of Ieji Hisashi and was also a rival. He watches Hisashi’s return to the company with complicated feelings.

Oikawa Mitsuhiro as Tsukuba Yoshiaki
Ieji Hisashi’s attending physician. An excellent brain surgeon. He has been counselling Hisashi who seems his wife’s face as a mask. He often has a merciless manner of speaking towards Hisashi, and at times, Hisashi even becomes overwhelmed.

Nishida Toshiyuki as Kozukue Yukio
The head of Aoi Imperial Securities’ Thirteenth Sales Department. He is kind and mild, but a rather insensitive person. According to himself, he was a candidate for the position of company president but lost in the race. How much of this is true is shrouded in darkness.

Episodes
#1: I’m Home! The Broken Family … Married Life with a Wife in a Mask
#2: Why I Married My Masked Wife … My True Nature Exposed by a Good Friend
#3: I Killed My Father-in-law? The Secret of the Bitter Wine
#4: The Middle-aged Couple that I Broke Up?! The Folly of My Job Assignment Away from Home
#5: An Apology Letter to Mum … The Battle between My Two Wives
#6: Recalling Memories on the Last Family Vacation! Confessions of the Mask to My Wife
#7: The Man who Dumped Mum and Me … Going Through Love and Hate
#8: A Couple that Cannot Get Back … The Affairs of the Masked Couple
#9: Divorce Papers! Reasons for Breakup with Family, Arrest and Surveillance
#10: All Riddles are Revealed! Separation from My Masked Wife

This blog contains information and musings on current and upcoming Japanese dramas but is not intended to be comprehensive.
View all posts by jadefrost →
This entry was posted in Spring 2015 Dramas and tagged Arai Hirofumi, I'm Home, Kimura Takuya, Mitsuishi Ken, Mizuno Miki, Nishida Toshiyuki, Oikawa Mitsuhiro, Ueto Aya. Bookmark the permalink.