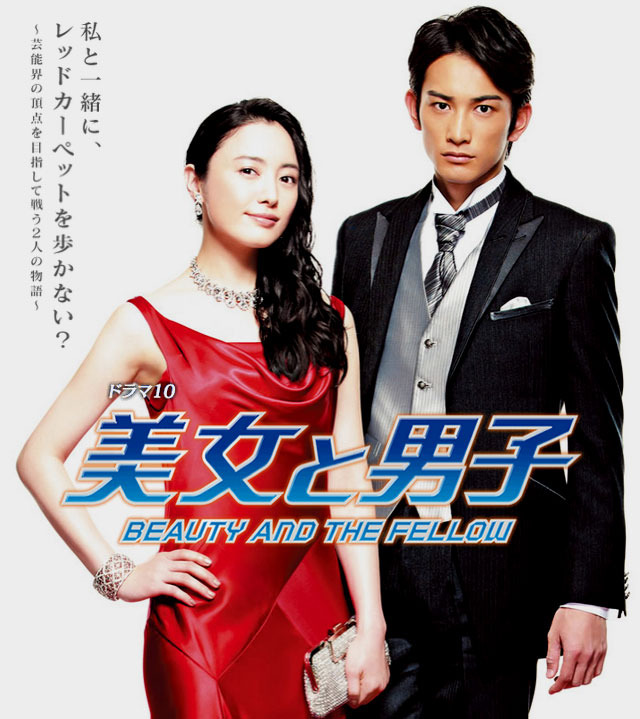 Story
Sawatari Ichiko was supposed to be a high-powered career woman working for the planning department of IT company, Madarame Corporation. But one day, she is suddenly ordered by her boss, Shiota Mitsuru, to go over to Hinode Promotion, an entertainment production company that Madarame Corporation has entered into a venture with. This gives Ichiko, an impulsive, arrogant woman who is good at her job, but does not understand people’s feelings, a shock. When she visits Hinode Pro, she discovers that it is a small entertainment production company run by a man called Namiki Masao. Ichiko is alarmed by the dispirited, struggling one-hit singer and third-rate talents. She goes back to Madarame Corporation to protest against her secondment, and offers to quit after Madarame discloses that this is a demotion. However, Ichiko takes the first step toward becoming an artiste manager, which was something she had never expected, on condition that she be reinstated to a key role at Madarame Corporation if she succeeds in turning a declining Hinode Pro around. Believing that she has to find a newcomer in order to rebuild Hinode Pro, she scouts the handsome but rude Sakisaka Ryo who works as a traffic warden at a construction site. Ichiko makes every effort to groom him to be a star. At the first audition, she is disappointed by Ryo who shows no enthusiasm. However, she gives him a taste of being an extra at Namiki’s suggestion. Ryo becomes conscious of the joy of acting and wins his first role with a line in a drama starring the great actress, Nakazato Reiko. Although Ryo is hostile to Ichiko, he soon rises to become a star and Ichiko learns for the first time the joy of making people feel happy. The two of them keep having conflicts, but are aware that each person is an indispensable partner to the other. Ichiko and Ryo overcome all sorts of trials and set their sights to be the best in the entertainment world. They gradually become “comrades in arms” and start to be attracted to each other.

Characters
Nakama Yukie as Sawatari Ichiko
A career woman who works for the large IT company, Madarame Corporation. She is unpopular because of her over-assertive, high-handed working style. But gets seconded to an affiliate entertainment production company, Hinode Promotion, for some reason and becomes an artiste manager against her will. She scouts Sakisaka Ryo and does everything she can to groom him into a star in order to transform Hinode Promotion. However, she is unable to fulfil her promise to turn Hinode Promotion around and resigns from Madarame Corporation. Having made the decision to carry on in the entertainment industry, she moves to Office Ishino which was set up by fellow artiste manager, Ishino Satoru. She is put in charge of Ryo and his rival, Washimi Ukyo.

Machida Keita as Sakisaka (Madarame) Ryo
A part-time worker at a construction site. He is scouted by Sawatari Ichiko whom he happened to meet. Although he has no interest in the entertainment industry, he joins Hinode Promotion for the sake of making quick money. Despite recurring conflicts with Ichiko, he debuts as an actor. He and Ichiko steadily make progress as they find their footing. He gets the lead role of the special effects hero, Goggle Fighter Earth just when Hinode Promotion goes bankrupt. He moves to Office Ishino with Ichiko and they continue to face more challenges with their sights set on the red carpet in Cannes.

Segawa Ryo as Sawatari Keigo
Sawatari Ichiko’s husband. He works for a furniture import company. He and Ichiko have a son. He is a tolerant husband who kindly accepts Ichiko, who is wrapped up in work and does not care about the household chores.

Nakahara Takeo as Himura Atsushi
Sawatari Ichiko’s father. Although he was a capable chief editor at a large newspaper. But after retirement, he starts to get senile and makes the family worry.

Kusakari Masao as Madarame Haruhiko
The president of Madarame Corporation, which is called a trailblazer in the IT industry. He has invested capital in the entertainment production company, Hinode Promotion, and orders the hard-nosed Sawatari Ichiko to go over, agreeing to reinstate her as management if she turns Hinode Promotion around. He is actually the father of Sakisaka Ryo. When Hinode Promotion runs into financial difficulties, he refuses to provide assistance and pushes the company toward bankruptcy. He has ambitions in the entertainment industry. Partnering the successful producer, Daimon Ryutaro, he becomes the largest shareholder of Office Ishino.

Asano Kazuyuki as Shiota Mitsuru
The director of operations of Madarame Corporation. Sawatari Ichiko’s direct superior. He has a high opinion of Ichiko, and gives her a secondment to Hinode Pro in order to beat her self-centredness out of her.

Morimoto Leo as Namiki Masao
The laid-back company president of Hinode Pro. A 40-year veteran who loves his work. However, he has next to no management skills and Hinode Pro, which had once been powerful, is now on the decline. He welcomes Sawatari Ichiko as Hinode Pro’s saviour.

Maekawa Yasuyuki as Ishino Satoru
A successful manager of the big entertainment production company, Morriss Agency. He and Sawatari Ichiko are business rivals. But he becomes a mentor who teaches her a lot of things about being an artiste manager. He eventually leaves Morriss Agency to set up and become the president of Office Ishino. He highly appreciates Ichiko’s abilities. He puts her in charge of both Sakisaka Ryo and Washimi Ukyo in an attempt to give the two of them competition.

Takahashi George as Tadokoro Shinya
A singer who belongs to Hinode Pro. He once had a hit song, but remained obscure after that. His main job now is hosting infomercials as he dreams of making a comeback.

Maya Kyoko as Nakazato Reiko
One of Japan’s popular, talented top actresses. She has even won awards at foreign film festivals. She made her debut as an actress with Namiki Masao of Hinode Promotion in the past. Madarame Haruhiko wants her and she moves from Morriss Agency to Office Ishino.

Nakayama Masei as Washimi Ukyo
A new actor whom Ishino Satoru scouted. He made his debut at the same time as Sakisaka Ryo. Sawatari Ichiko regards him as a rival, but he constantly stays a step ahead of Ryo. He moves with Ishino to Office Ishino. A popular actor playing the lead role in a late night drama. He and Ryo end up starring in the same drama series together and this makes him see Ryo as a rival.

This blog contains information and musings on current and upcoming Japanese dramas but is not intended to be comprehensive.
View all posts by jadefrost →
This entry was posted in NHK, Spring 2015 Dramas and tagged Bijo to Danshi, Kusakari Masao, Nakama Yukie. Bookmark the permalink.

2 Responses to Bijo to Danshi