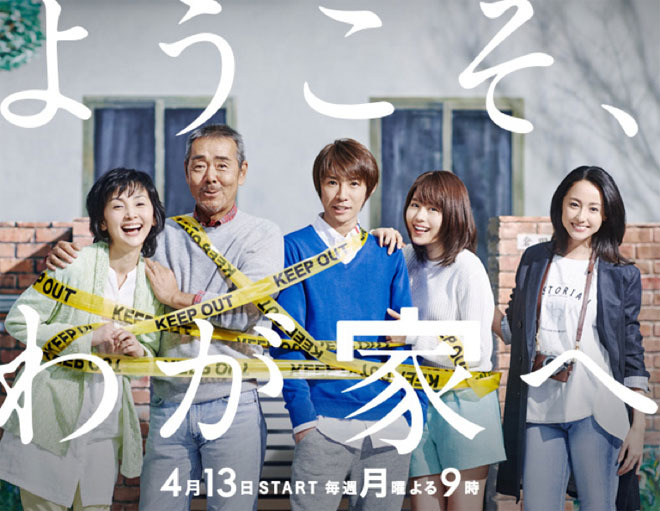 Story
Kurata Kenta lives with his parents, Taichi and Keiko, and younger sister, Nana, in a house in the outskirts. He is a struggling commercial artist with his own firm. But because he is timid and a coward, he cannot assert himself and is not successful in his work. Kenta takes after his father in that aspect, but he does not want to be spineless and unreliable like him. The relationship between father and son has soured. One evening, Kenta is standing in line for the train at a station platform when a man jumps the queue and shoves a female aside. Kenta would usually silently let such situations pass, but on this day, he corners the man and warns him. The man tries to resist, but the passengers around him also agree with Kenta. At that moment, a young lady picks up the cigarettes that the man had dropped, hands it over and suggests that the man leaves. Kenta is shocked by his own uncharacteristic behaviour because he is venting his anger about his job. After that, Kenta takes the train and bus to go back home, but along the way, he realises that he is with the man who jumped the queue. Fear swells in Kenta who jumps out at the bus stop in front of his house and the man follows behind. Kenta runs and shakes him off. When he reaches home, he tells his parents and sister about the incident. He is cautioned by Taichi not to get involved in unnecessary things. However, that day is the turning point. The next morning, Kenta is awakened by Nana’s panicky voice. The flowers in the flower bed have been entirely uprooted. But Kenta and Taichi both head to their workplaces because it is office hours. When Kenta goes to the train station after work, the young woman who had made the man back off yesterday is there. Kenta talks to her about the resentful man following him as well as the flower bed incident. Then the young woman hands him her name card and asks if he would like to look into it. She is Kando Asuka, a magazine reporter. At the same time that the harassment begins, Taichi discovers alleged improprieties at his company and worries about what he should do. As Kenta and his family attempt to identify the stalker, several questionable people emerge around them.

Characters
Aiba Masaki as Kurata Kenta
A 29-year-old man who is timid and dreads conflicts. He is a designer by occupation. He has been good at drawing from a young age and went to art college. He won a prestigious prize while studying and found a job at a famous design agency after graduation. But he did not get along with the company president and started his own business. However, after that, he eventually compromises himself and produces designs which conforms to the other party. He is unpopular with clients and continues to have little commercial success. He gets his timid personality from his father, but he has little self-awareness. In fact, he feels a small amount of resentment about the existence of his unreliable father. On the way home one day, he warns a man who attempted to cut into the queue and board the train. This uncharacteristic bravery marks the start of harassment by a stalker.

Sawajiri Erika as Kando Asuka
A rather strong-minded, no-nonsense reporter. She originally aspired to be a journalist, but now works for a small publishing company which mainly publishes a local magazine. Even though it is a local magazine, she has the habit of covering the details of her subjects to the extent that she would be told by the editor the she need not write to that point. She happened to be present when Kurata Kenta warned a man who attempted to jump the queue and board the train. In an unexpected turn of events, she learns that Kenta and his family have become stalking victims. Her reporter instincts kick in and she asks Kenta to let her cover the story. Then she pursues the stalker with Kenta.

Arimura Kasumi as Kurata Nana
Kurata Kenta’s younger sister. A cheerful, free-spirited 21-year-old university student who does not seem like her brother. She is the dependable person of the family. She is currently job hunting and aims to be a newscaster. Life seems to be going well for her, but lately she has been troubled about her “ex-boyfriend” who is obsessively following her around. She confides this to her good friend, but keeps it a secret from her family. Although she and Kenta often quarrel over trivial things, their relationship as siblings is good.

Fujii Ryusei as Fujimoto Masaki
Kurata Nana’s ex-boyfriend. They recently broke up, but he persistently hangs on to her.

Takada Junji as Yagi Toshiharu
Kurata Taichi’s contemporary at during his time at Aoba Bank. He is now the assistant manager of human resource. Taichi’s personnel appointment concerns him. Because of that, he worries about Taichi and often meets him to listen to his problems and provide advice. To Taichi who has been seconded to Nakano Electronic Components and cannot get rid of the feeling of being a stranger, he is the only link to the bank and one of the few friends he can open up to.

Takenaka Naoto as Mase Hiroki
The sales manager and biggest earner of Nakano Electronic Components. Because his sales performance is by far the best, even the company president, Mochikawa Toru, is impressed. An assertive man who believes that sales requires a pragmatic, no holds barred approach. Because of that, he is at loggerheads with the general affairs department which quibbles about every detail, and Kurata Taichi is frequently talked down. He is the person that Taichi dislikes the most within the company.

Minami Kaho as Kurata Keiko
Kurata Kenta’s gentle, loving mother. She met her husband, Taichi, during his days at Aoba Bank. After marriage, she shouldered the burden of raising their children, Kenta and Nana, as a full-time housewife. Now that her children have become independent, she has started attending a pottery class for housewives in the neighbourhood in an attempt to make time for herself. But it is a place where prejudice and envy lurks. She is good at cooking, but often prepares strange meals inspired by the cooking programmes she watches on a certain day. There are times when the family would look disappointed but she is indifferent.

Terao Akira as Kurata Taichi
Kurata Kenta’s father. Kenta is like him, a timid person with no backbone. He takes pride in staying out of needless things. He used to work for a major commercial bank, Aoba Bank, but he dropped out from the competition to climb the corporate ladder and is on secondment to a small client company, Nakano Electronic Components, as its general affairs manager. He struggles to establish a harmonious relationship at the workplace every day so that he will not be branded unnecessary by the company he has been seconded to and cannot return to the bank. At the same time that the harassment begins, he discovers alleged improprieties at Nakano Electronic Components.

This blog contains information and musings on current and upcoming Japanese dramas but is not intended to be comprehensive.
View all posts by jadefrost →
This entry was posted in Fuji TV, Spring 2015 Dramas and tagged Arimura Kasumi, Sawajiri Erika, Terao Akira, Yokoso Wagaya e. Bookmark the permalink.