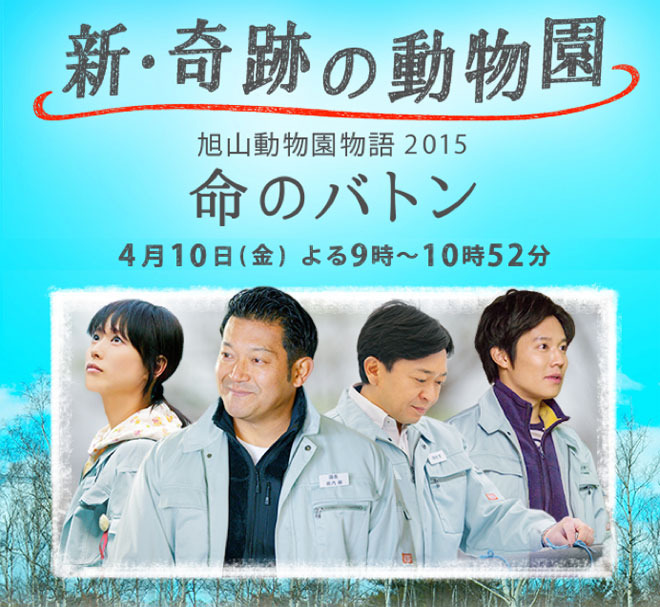 Date: From 9.00 p.m., 10 April 2015
Scriptwriter: Sagara Atsuko (Silent Poor, Single Mothers, Welkame)
Cast: Yamaguchi Tomomitsu, Toda Erika, Koide Keisuke, Arakawa Yoshiyoshi, Riju Go, Yamauchi Takaya, Iida Kisuke, Kuroshima Yuina, Joshima Shigeru, Ito Shiro
Synopsis: The northernmost zoo in Japan, Asahiyama Zoo in Hokkaido was once in danger of being shut down but overcame this crisis. The leader of the zookeepers, Sakauchi Zen (Yamaguchi Tomomitsu), has become the zoo’s director and works hard for the construction of a new giraffe enclosure. Zookeepers Izumi Sawako (Toda Erika) and Nakagawa Shinichi (Koide Keisuke) are swamped with their job of raising animals. They also privately have worries. Sawako, who is in charge of the popular red pandas, sees signs of a pregnancy, but cannot feel genuinely happy. Having been present at the deaths of animals countless times in the past, she has developed a fear of witnessing the life and death of animals. Nakagawa, who has been appointed the leader of the breeding staff, even has strong ideas about the current state of the zoo. A part of him cannot agree with Sakauchi on the construction of the giraffe enclosure too. Veteran zookeeper, Makihara Yuichiro (Ito Shiro), who has known the zoo since the time it opened, cannot make up his mind about his own retirement. To compound matters, a flamingo escapes from the zoo. Sakauchi sets a trap which makes use of the flamingo’s behaviour, but the flamingo is killed by a wild fox. Nakagawa opposes Sakauchi’s decision which sacrificed an animal. Confidence in the zoo also plummets. Meanwhile, Okamura Tetsu (Joshima Shigeru), who has been an elementary school janitor for many years, comes as a zookeeper in a personnel reshuffle. Poor with both people and animals, Okamura is given the task to rear the zoo’s oldest animal, the hippopotamus, by Sakauchi. Okamura is uncomfortable with a job which does not have a manual. However, he takes Makihara’s advice and gradually becomes concerned about the hippopotamus more than anyone else. The new enclosure is completed. A young hippopotamus also arrives. These appear to be positive signs for the zoo. Then one day, a terrible sight unfolds before Okamura … …
Official Website: www.fujitv.co.jp/kiseki2015

This blog contains information and musings on current and upcoming Japanese dramas but is not intended to be comprehensive.
View all posts by jadefrost →
This entry was posted in Fuji TV, Spring 2015 Drama Specials and tagged Ito Shiro, Kiseki no Doubutsuen, Koide Keisuke, Kuroshima Yuina, Shin Kiseki no Doubutsuen, Toda Erika. Bookmark the permalink.