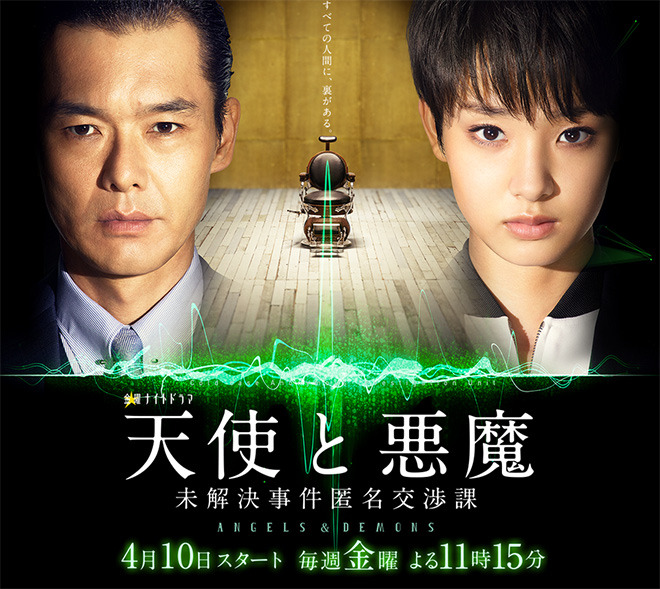 Story
“Angelic” rookie police officer Makita Hikari can only believe people. She was assigned to the Tokyo Metropolitan Police Department’s First Investigative Division as part of a test case of the government’s policy for the social advancement of women. However, she kept making mistakes and could not achieve results because of her innocence, and was placed in the unimportant Unsolved Cases Documentation Unit one year ago. One day, a mysterious man shows up in front of Hikari. He is the “devilish” genius lawyer Chajima Ryunosuke. Chajima believes in no one. He tells her that he has been hired on contract and assigned to the unit. Furthermore, he will be responsible for reinvestigating unsolved cases as the Unsolved Cases Anonymous Negotiations Section. Hikari is dumbfounded by the sudden turn of events. However, Chajima pays no heed and drags her out to re-examine the case of a club hostess who was stabbed to death one year ago. This was a case that Hikari was in charge of during her time at the First Investigative Division. A political analyst, who had an affair with the victim, emerged as a suspect. But the case was not solved because he disappeared. Hikari and Chajima form an odd partnership to crack unsolved cases using plea bargaining with absolute secrecy.

Characters
Goriki Ayame as Makita Hikari
An honest, conscientious police officer who belongs to the Tokyo Metropolitan Police Department’s Unsolved Cases Documentation Unit. Her father was a policeman, and she unquestioningly took the same path as him. She was initially assigned to the First Investigative Division. But because she is an unsuspecting person, she could not see through people. She kept on being fooled by suspects at crucial moments. Realising that she is not cut out to be a detective, she decided to resign from the police force upon marriage. However, she was betrayed by her boyfriend and they broke up. She was relegated to the Unsolved Cases Documentation Unit. One day, Chajima Ryunosuke, a mysterious man who has been assigned to her unit, appears. Although she is at his mercy, she gets involved in the activities of the Unsolved Cases Anonymous Negotiations Section. In addition to being a hard worker, she possesses extraordinary investigative knowledge and has great reflexes.

Watabe Atsuro as Chajima Ryunosuke
An enigmatic, cynical genius lawyer whose identity is not known. He suddenly appears before Makita Hikari and works together with her as a member of the Unsolved Cases Anonymous Negotiations Section. No one knows his true intentions for taking on the assignment to crack unsolved cases using plea bargaining in absolute secrecy. Despite being a lawyer whose duty is to trust and defend people, he is a loner who cannot trust people. His firm philosophy is that “every person has another side”. He has the ability to psychologically analyse other people, excellent debating skills as well as mental capacity to think. On the other hand, his physical ability is below average. He hates violence and exercise. He loves money and hates the living standards of the common people.

Hasegawa Tomoharu as Udagawa Ken
A senior detective of the Tokyo Metropolitan Police Department’s First Investigative Division. Rank: Assistant Inspector. Makita Hikari’s former superior. He is a thorn in the side of Hikari and Chajima Ryunosuke who are concerned with unsolved cases. He soon starts to have doubts about the baffling way cases involving the Unsolved Cases Anonymous Negotiations Section are solved, and becomes a threat to Hikari and Chajima.

Arakawa Yoshiyoshi as Ano Tadaomi
A public prosecutor of the Tokyo District Public Prosecutors Office. Chajima Ryunosuke’s former subordinate. He is saddled with settling the cases which the Unsolved Cases Anonymous Negotiations Section get involved in. He is a world-wise man who holds a key position in providing legal justice for suspects, but is forced to behave like middle management.

Uzaki Ryudo as Kagurazaka Ryoichi
A specifically appointed superintendent public prosecutor of the Supreme Public Prosecutors Office. He is one of the persons involved in the establishment of the Unsolved Cases Anonymous Negotiations Section. He was also closely connected to a case that Chajima Ryunosuke was in charge of when he was a public prosecutor. He takes advantage of Chajima in order to test whether the implementation of plea bargaining will be what he has in mind. He aims to adopt it in Japan and has been working behind the scenes.

This blog contains information and musings on current and upcoming Japanese dramas but is not intended to be comprehensive.
View all posts by jadefrost →
This entry was posted in Spring 2015 Dramas, TV Asahi and tagged Tenshi to Akuma, Watabe Atsuro. Bookmark the permalink.