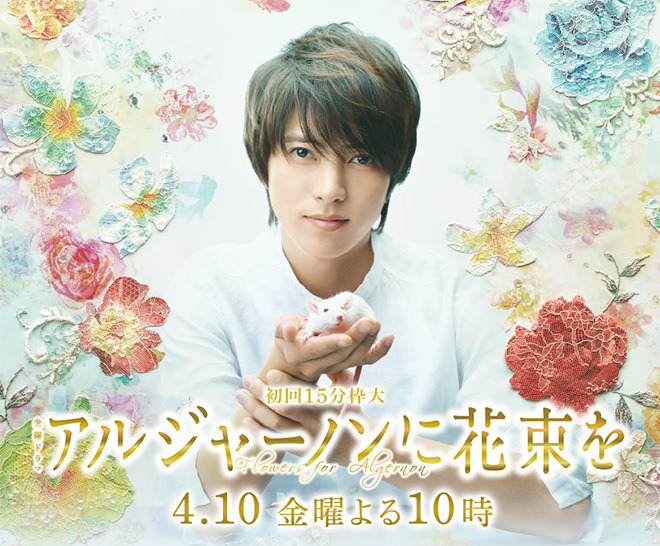 Story
Shiratori Sakuto is 28, but has the intelligence of a 6-year-old boy. He works for ‘Dream Flower Service’, a flower distribution centre which provides employment for problem youth including those who have been in juvenile corrective institutions. One day, Sakuto and a colleague, Yanagawa Ryuichi, deliver a rose bouquet to the apartment building where Mochizuki Haruka lives. Because Haruka does not know that the deliveryman is mentally challenged, she is shocked by his response and tries to call the police. Yanagawa hurriedly rushes over to explain the situation and seems to settle the matter. However, Sakuto gets drawn to a pair of glittering earrings on an accessory stand at the entrance’s display shelf and reaches over with his hand. This creates another commotion. The pure, kindhearted Sakuto can barely do a delivery, but his dream is to become a “good boy” whom his mother will like. On the other hand, at the brain physiology research centre which Haruka works for, team leader Professor Hachisuka Daigo has been studying the improvement of mental performance and succeeded in lab experiments on a white mouse called Algernon. A presentation to a pharmaceutical company also goes well because of him and the clinical trial, which is the next step, will be backed by the company president, Kawaguchi Reiji. However, researchers, who have returned from the presentation, voice worries that this is premature. Nevertheless, Haruka blindly believes in Hachisuka’s judgement. She is drawn to him both as a scientist and as a man. The team immediately proceeds to facilities which help people with disabilities. They search for subjects for the clinical trial, but have difficulty finding people who will give consent in view of the risk of side effects. In the midst of this, Algernon escapes from his cage and goes missing. They determine his location via GPS but cannot find him. At that moment, Sakuto has gone to pick up girls at Shibuya with his colleagues. Doing just as they told him to, he stands alone on the road and calls out to females. However, he gets entangled with a rough guy who punches him. A bloodied Sakuto falls over on the roadside. A white mouse approaches him … … Sakuto is transformed into a genius through surgery. But when Algernon’s new intelligence begins to fade and he dies, Sakuto realises that his genius, too, is destined to leave him.

Characters
Yamashita Tomohisa as Shiratori Sakuto
He is 28, but has the intelligence of a 6-year-old boy. A fine young man who accepts the teasing of the people around him as proof of friendship. He works for the flower distribution centre. He has always had the desire to become smart because of some sentiment. One day, he undergoes a surgery which would improve his intellectual ability. Similar to the mouse Algernon, he soon shows changes from day to day and eventually transforms into a genius, but … …

Kuriyama Chiaki as Mochizuki Haruka
A researcher at the brain physiology research centre. A calm, self-effacing woman. But she has a kind character and inner fortitude. When she sees people who are in need or the vulnerable, she cannot leave them alone. She has a strong respect for the research team leader, Professor Hachisuka Daigo. She is attracted to him not just as a scientist, but also as a man. At that moment, she has a fateful encounter with Shiratori Sakuto, a pure youth with intellectual disability.

Kubota Masataka as Yanagawa Ryuichi
An employee of the flower distribution centre. He is smart and a central figure among his friends. He would also be competent in his work if he were so inclined. But because he has a somewhat cynical, apathetic attitude towards the world, he is philosophical about it. When he was a child, his father had an affair and suddenly disappeared. He feels sorry for his mother who could not come to terms with reality and became a shopaholic. This led him to come up with money through repeated fraud. Before long, he was arrested and served time in prison.

Hagiwara Masato as Takebe
The president of the flower distribution centre in an old neighbourhood of Tokyo. Shiratori Sakuto’s father, Hisato, was his senior in school and he feels indebted to Hisato for looking after him in the past. 13 years ago, Hisato had asked him to let the 15-year-old Sakuto work. He took Sakuto in and has been looking after him in place of Hisato since then. He is the person who understands Sakuto the most.

Ishimaru Kanji as Professor Hachisuka Daigo
The team leader of the brain physiology research centre and the leading authority on neurological research. A skilled scientist with high aspirations, he has dedicated his whole life to research that would raise the intellectual ability of the human race. He is always cool and collected. He commands great respect and trust from Mochizuki Haruka and the staff around him. He chooses Shiratori Sakuto as his subject for the human clinical trial based on results of the experiment on the mouse Algernon.

Nakahara Takeo as Kawaguchi Reiji
The president of a large pharmaceutical company. Adopting the ideology of contributing to the health of humankind, he rose to the top in one generation. He is well-connected and close to the research institution led by Professor Hachisuka Daigo. As a sponsor, he has invested large sums in research development. He is also sponsoring the research into brain surgery and drug development which will improve intellectual ability as part of this.

Kusakari Tamiyo as Shiratori Madoka
Shiratori Sakuto’s mother. She has a serious, diligent character in everything. When she gave birth to the Shiratoris’ long awaited first-born son, she was so happy that she shed tears of joy, but soon discovered that he has a disability. This overly serious woman is no longer able to come to terms with this fact given various circumstances.

This blog contains information and musings on current and upcoming Japanese dramas but is not intended to be comprehensive.
View all posts by jadefrost →
This entry was posted in Spring 2015 Dramas, TBS/MBS and tagged Algernon ni Hanabata o (2015), Kubota Masataka, Kuriyama Chiaki, Kusakari Tamiyo, Tanimura Mitsuki, Yamashita Tomohisa. Bookmark the permalink.