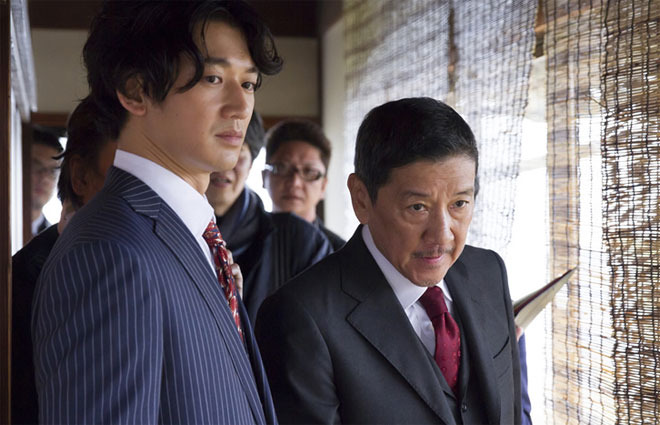 Date: From 10.00 p.m., 29 March 2015
Scriptwriter: Isshiki Nobuyuki (Haitatsusaretai Watashitachi, Kyuumei Byoto 24-ji Season 4)
Original Work: Natsu no Hate by Oka Yasumichi
Cast: Eita, Okuda Eiji, Karasuma Setsuko, Nakamura Yuri
Synopsis: When Yoshida Shuichi (Eita) was still a child, his father Kanji disappeared without a trace, leaving behind a huge debt. Kanji was quite a talker and loved women. He was good at making money and even an impressive liar. Hating his father, Shuichi decides to live his life differently. After graduating from university, he starts to work in the advertising industry. Before long, Shuichi is doing one hit commercial after another. He eventually sets up his own big advertising agency. He marries Kiko (Nakamura Yuri), a colleague at work, and starts a family. Shuichi’s personal and professional lives seem to be glamorous and going well. But on the other hand, he is privately frustrated with himself for not being able to open up to anyone. His relationship with his wife has become loveless a long time ago, and he has been going back and forth between the apartment of a young lady whom he met through work. As he gets older, Shuichi is steadily becoming like his father and this makes him sick. He eventually makes up his mind to set out on a journey to find his father. In the meantime, he is trapped in a vicious cycle; the more he loathes his father, the more he gets disgusted with himself. As Shuichi follows the traces of his father’s life, he realises that he wants to like his father just a little. He is soon reunited with his father (Okuda Eiji) in an unexpected manner after 22 years. Kanji is the same as usual and continues to assume his irresponsible, inscrutable attitude. What manner will Shuichi take towards him and how will Kanji react?
Official Website: www.nhk.or.jp/fukuoka/drama/kirai

This blog contains information and musings on current and upcoming Japanese dramas but is not intended to be comprehensive.
View all posts by jadefrost →
This entry was posted in NHK, Winter 2015 Drama Specials and tagged Eita, Okuda Eiji, Watashi wa Chichi ga Kirai. Bookmark the permalink.