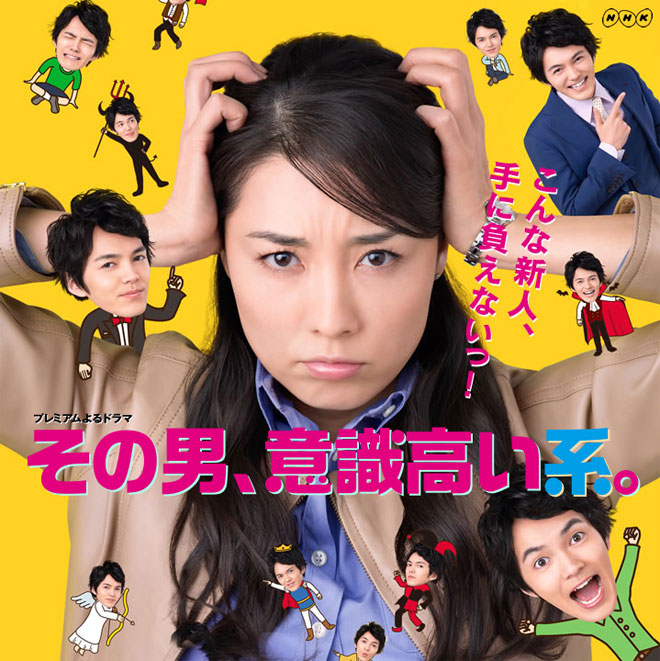 Story
Tsubokura Haruko, a division manager of a mid-sized IT company, Saotome Accounting Software, is feeling gloomy. She will soon be 35 and has misgivings about her own life. “I wonder if it’s good that my life stays like this …” She and her long-time boyfriend, Ninomiya Takashi, a colleague, have their sights set on marriage. But she does not like the feeling of a life of stability. At this time, Saotome Accounting Software’s president, Saotome Ranko, headhunts a student she met at the company’s briefing session and brings him on board. He is Ichijo Joe, a student who openly criticised the company’s products for being behind the times. In fact, Ichijo is one of those youths with excessively high self-esteem, that is a hot topic now. He oversells his business skills and personal background, presenting himself in a favourable light that implies he is capable person even though he does not even have any ability. Ichijo is assigned to Haruko’s section and she reluctantly ends up looking after him.

Characters
Ito Ayumi as Tsubokura Haruko
The manager of Saotome Accounting Software’s Third Sales Division. A mid-career employee who tries to have high self-esteem. She has been with Saotome Accounting Software for 11 years. She is in a position to be called the mainstay of the company, and she has many juniors. In her personal life, there is a hint that the word “marriage” has come up with her long-time boyfriend, Ninomiya Takashi. Life is great! Or so it should be … … Her everyday starts to get rocked by the appearance of one new employee with a high self-esteem. Although she was greatly irritated when she met Ichijo Joe, this encounter brings about dramatic changes to her outlook on work and life. She is basically the sports-oriented sort and has a caring character. She is about to develop this newbie whose type is the first that she has come across, but she also goes around in circles because of her tendency to lose sight of her surroundings once she has gotten something into her head … …

Hayashi Kento as Ichijo Joe
Saotome Accounting Software’s new hire who made an impression with his boldness and appeal at the company’s briefing session when he criticised it for being old-fasihoned. He has excessively high self-esteem. He lives in his family home. His family all have high self-esteem, and his parents gave him the name Joe with the expectation that he would work overseas. He was raised to have high self-esteem, and his became hyper. Because he believes that he is fundamentally correct, he does not repent, regret and improve. Will he be able to make great strides as a real business person in a world of hardships?

Daichi Mao as Saotome Ranko
The elusive and capable, second-generation president of Saotome Accounting Software. She loves the company and employees which she developed as if they are her own children. She hired Tsubokura Haruko as an employee because she discerned her straightforward personality of going headlong into something once she has set her heart on it. Although she trusts Haruko, it is questionable if she has a high regard for her. Haruko respects her and thinks of her as a benefactor. Feeling that Ichijo Joe, whom she met at the company’s briefing session, has the power to lift the company to the next level, she ends up hiring him as a new employee.

Suruga Taro as Ninomiya Takashi
The manager of Saotome Accounting Software’s First Sales Division. Tsubokura Haruko’s boyfriend and colleague. A good, old-fashioned salesman who works for Saotome Accounting Software. Haruko has a propensity to complain. But he takes her dissatisfaction in both work and personal life with generous kindness and tolerance. He believes that it is time they get married because their courtship has been long. Just as he is considering a proposal and making an official declaration about their relationship within the company, Ichijo Joe turns up. Because of Ichijo’s existence, he unconsciously starts to get thrown off by his pace … …

Satsukawa Aimi as Osuzuki Maria
Ichijo Joe’s childhood friend. She called on Ichijo as a powerful backer for the development of girl’s games in order to exploit his network of contacts. She lived in Los Angeles during junior high school days. He thinks of her as his girlfriend, but she is not in the least conscious of it. Like Ichijo, she has high self-esteem. Her interests are debating in cafes and updating her business blog. Because she acts like she treats her work with contempt, she frequently has confrontations with Tsubokura Haruko and adds to Haruko’s worry. In truth, her personality of making a beeline for something once she sets her heart on it, is similar to Haruko’s.

This blog contains information and musings on current and upcoming Japanese dramas but is not intended to be comprehensive.
View all posts by jadefrost →
This entry was posted in NHK, Winter 2015 Dramas and tagged Hayashi Kento, Ito Ayumi, Sono Otoko Ishiki Takai-kei. Bookmark the permalink.