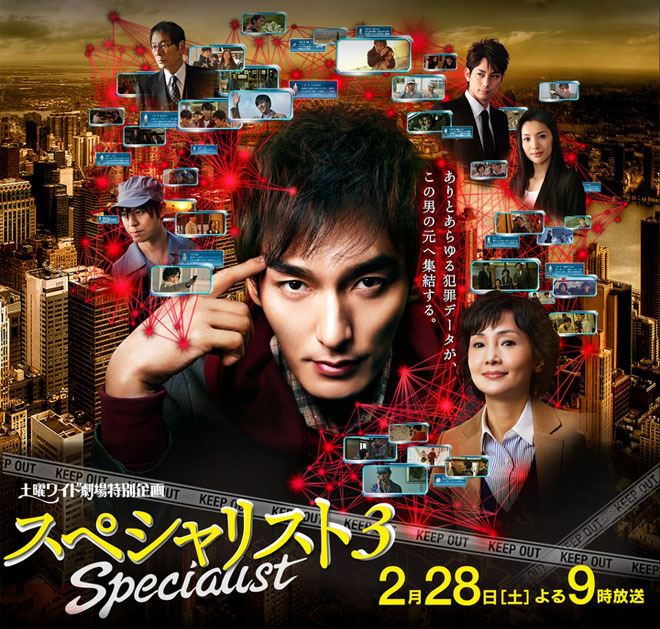 Date: From 9.00 p.m., 28 February 2015
Scriptwriter: Todayama Masashi (Aibou Series, Specialist 1 & 2)
Cast: Kusanagi Tsuyoshi, Minami Kaho, Ashina Sei, Satoi Kenta, Kamikawa Takaya (guest star), Tokui Yu, Konno Mahiru, Tanaka Yoji, Hiraoka Yuta, Enami Kyoko, Osugi Ren, Kaname Jun (guest star), Takada Sho (guest star), Kunihiro Tomiyuki (guest star), Dan Jiro (guest star)
Synopsis: Kubota Shu, who runs a temporary employment agency, is clubbed to death with a bat. A metal bat believed to be the murder weapon and something that looks like an old toy are found at the crime scene. Takakura Kiichiro (Osugi Ren), the Kyoto Prefectural Police’s commissioner, orders Takuma Yoshito (Kusanagi Tsuyoshi) to go there. Takuma and the other members of the Special Investigation Unit begin the investigation. They learn that the old toy is part of a set of seven “Protect Kyoto” character figurines of different occupations which were made while Takuma was in the Kyoto Prefectural Police’s Public Relations Division some 10 years ago. This time, the toy placed at the crime scene stands for public prosecutor. Oddly, Kubota was a former senior prosecutor of the Kyoto Public Prosecutors’ Office. Takuma says this is a case that he must solve and tells his regular partner, Anegakoji Chinami (Minami Kaho), that he is dissolving their partnership. He starts to investigate on his own and discovers that a “Protect Kyoto” character figurine wearing a police uniform was left at the scene of the murder of Chinami’s husband, Takehiko, who had been a police officer. There is a ring of truth to what the prisoner, Sagami Wakahiro (Kamikawa Takaya), had previously talked about. “The case of Anegakoji-san’s husband 12 years ago and your wrongful conviction are connected.” Suspicious of Takuma’s actions, Chinami presses him for an explanation, and gets the truth out of him. Takuma does not want to get her involved because he does not know what danger lies ahead. But she gets the upper hand and begins to investigate the case 12 years ago with Matsubara Yuiko (Ashina Sei), Horikawa Kohei (Hiraoka Yuta) and the rest of the Special Investigation Unit. They identify several cases where the character figurines were left behind at the crime scenes. What is the association between the figurines which Takuma made and these cases? As Takuma and the members get to the bottom of the matter, they come to the least expected person. In addition, the shocking truth regarding Takuma’s conviction is revealed … …
Official Website: www.tv-asahi.co.jp/specialist3

This blog contains information and musings on current and upcoming Japanese dramas but is not intended to be comprehensive.
View all posts by jadefrost →
This entry was posted in TV Asahi, Winter 2015 Drama Specials and tagged Ashina Sei, Kamikawa Takaya, Kusanagi Tsuyoshi, Osugi Ren, Specialist Series. Bookmark the permalink.