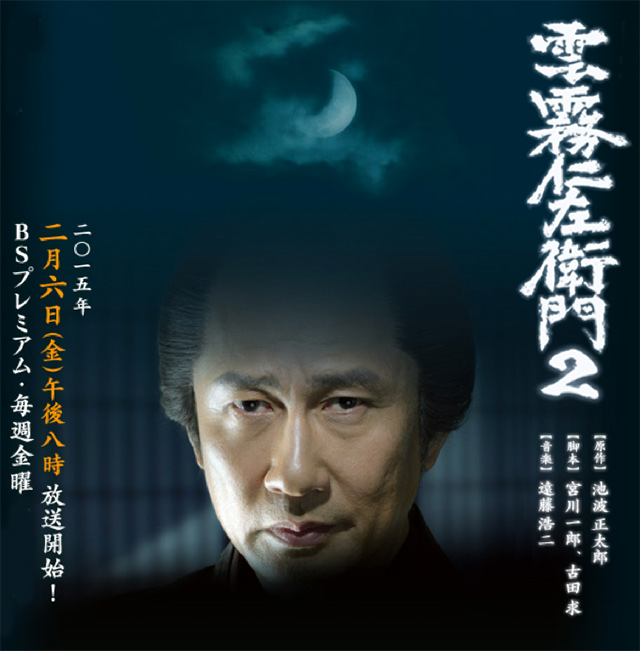 Story
During the Kyoho period there is a gang of thieves which is active not just in Edo but also the Tokaido and the Nakasendo, and all across the Kansai region. Targeting only the very wealthy, they steal large sums of money with skillful techniques and never kill or injure people. Because they appear with the clouds and disappear like the mist, people call them the Kumokiri gang. The leader who keeps a rein on this gang of highly-skilled and notorious followers Nanabake no Ochiyo, Kinezumi no Kichigoro, Subashiri no Kumagoro, Ingakozo Rokunosuke and others is Kumokiri Nizaemon, the greatest bandit of all time. Abe Shikibu, the chief of the public security force, the Hitsuke Tozoku Aratamekata, opposes him. The fierce battle which pits the wits of the two men continues to go on. Nizaemon reappears in Edo after completing a big job in Nagoya. Shikibu frenziedly pursues the Kumokiri with the aim of capturing the whole gang. One day, the description and likeness of a thief called Shiranui no Yogoro is put up in Edo. Information that Yogoro wants to join the Kumokiri soon reaches Nizaemon. Ochiyo wonders if Yogoro is the benefactor who took care of her in her childhood. She feels concerned about the welfare of this wanted man. Nizaemon decides to meet Yogoro for her sake. When Yogoro shows himself, his true identity is unexpected. On the other hand, the inevitable circumstances that made Nizaemon abandon his samurai status and turn to being a thief is revealed … …

Characters
Nakai Kiichi as Kumokiri Nizaemon
The leader of the Kumokiri gang of thieves that observe the rules of “do not kill, do not violate, do not steal from the poor”. They are like the mist with no traces of them. Because they steal with brilliant techniques, they are known as an extraordinary gang of thieves of all time.

Kunimura Jun as Abe Shikibu
The chief of the Hitsuke Tozoku Aratamekata, the public security force which cracks down on felony such as arson and theft. He is the most resourceful chief that the the Hitsuke Tozoku Aratamekata has ever had. Passionate about arresting the entire Kumokiri gang to the extent of giving up his personal fortune, he has gained the trust of his subordinates.

Uchiyama Rina as Nanabake no Ochiyo
A member of the Kumokiri gang. She has been working under Kumokiri Nizaemon ever since she lost her home in a fire at a young age, became an orphan and was picked up. She adores him. She can transform herself into anyone from nobility to daughter of a merchant, and has made a name for being good at infiltrating targets, passing along information and bringing in the gang for heists.

Emoto Tasuku as Ingakozo Rokunosuke
A member of the Kumokiri gang. He was picked up by Kumokiri Nizaemon just at the point when he became an orphan at the age of seven. Although he is skilled in stealing, his hot-blooded nature does him more harm than good. It is the reason he breaks the gang’s rules and also puts the gang in tight spots.

Ibu Masato as Kinezumi no Kichigoro
The Kumokiri gang’s second in command. Because he is a former warrior, his sword skills are first-rate. He is Kumokiri Nizaemon’s most trusted right-hand man and called “small head” by their followers. A competent, calm and collected person. He takes command of the team that executes the thefts, under orders from Nizaemon.

Tezuka Toru as Subashiri no Kumagoro
The Kumokiri gang’s third in command. He was given the nickname “striped mullet” because of his speed. He has great physical ability and sneaks into impenetrable safes like an acrobat. Because he is good with his hands, he is also a first-rate locksmith. He disguises repair of a fence as carpentry and performs work in order to secure an escape route.

Tamura Ryo as Tsuji Kuranosuke
He has his sights set on Edo from Ise and hurries on the Tokaido. He appears to have a connection with the Kumokiri gang, but the true character of this relationship is not known. He seems to be in on the secret surrounding Kumokiri Nizaemon’s past.

This blog contains information and musings on current and upcoming Japanese dramas but is not intended to be comprehensive.
View all posts by jadefrost →
This entry was posted in NHK, Winter 2015 Dramas and tagged Ibu Masato, Kumokiri Nizaemon Series, Kunimura Jun, Nakai Kiichi, Uchiyama Rina. Bookmark the permalink.