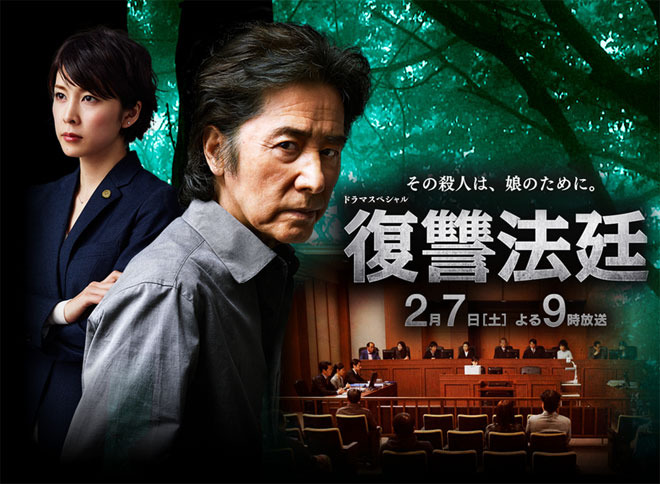 Date: From 9.00 p.m., 7 February 2015
Scriptwriter: Takeyama Yo (Kaseifu wa Mita, Kokuhatsu, Yakou no Kaidan)
Cast: Tamura Masakazu, Takeuchi Yuko, Yagyu Miyu, Ichige Yoshie, Watanabe Dai, Tezuka Satomi, Hasegawa Tomoharu, Nakao Akiyoshi, Mizuhashi Kenji, Takahashi Mitsuomi, Tanaka Tetsushi, Ono Takehiko, Morimoto Leo, Hiraizumi Sei, Kishibe Ittoku
Synopsis: In the autumn of 2013, former university art professor Nakahara Seiji (Tamura Masakazu) traces the location of Iwasaki Kenji (Nakao Akiyoshi), who killed his beloved daughter, Yukiko (Yagyu Miyu), a fresh university graduate with a promising future. He shoots him dead with a hunting gun, and immediately turns himself in to the police. Yukiko was raped and strangled by Iwasaki. Her body, killed in cold blood, was found, one and a half years ago in May 2012. Iwasaki was quickly arrested, but was handed a not guilty sentence by the judge (Hiraizumi Sei) presiding over the trial. Of all things. The trial could not go on because his confession was considered extracted from him through brute police force. Nakahara and his wife, Akiko (Ichige Yoshie), who had believed Iwasaki would receive the death sentence, were pushed into an abyss of despair. Akiko fell ill in a short time and passed away. After losing the people he loved one after another, Nakahara decided on revenge on Iwasaki who had robbed him of his family, and on the legal system which could not punish a vicious criminal … … He plainly admits to murdering Iwasaki and has no wish for a reduced sentence. Intending to fight against the administration of justice alone, Nakahara turns down a lawyer. However, Ogata Nobuko (Takeuchi Yuko), a former prosecutor of the Tokyo District Public Prosecutor’s Office, becomes his new lawyer. Nobuko, who is still young in terms of experience, was angered by her superior’s irrational judgement and resigned from her job. In order to defend Nakahara, Nobuko first starts investigating the murder of his daughter. She learns that Yukiko was quite a naive, diligent daughter. Something unusual nowadays. However, an eyewitness stated that Yukiko got into Iwasaki’s car herself. Why would she have done that? Nobuko goes into the trial without resolving these questions. However, Nakahara, who had acknowledged his guilt all along, suddenly objects to the details of the lawsuit and asserts his innocence when asked to enter a plea at the first hearing. The prosecution including Okada Suminori (Tanaka Tetsushi) is dumbfounded and a tension envelopes the court … …
Official Website: www.tv-asahi.co.jp/houtei

This blog contains information and musings on current and upcoming Japanese dramas but is not intended to be comprehensive.
View all posts by jadefrost →
This entry was posted in TV Asahi, Winter 2015 Drama Specials and tagged Fukushuu Houtei, Kishibe Ittoku, Ono Takehiko, Takeuchi Yuko, Tamura Masakazu. Bookmark the permalink.