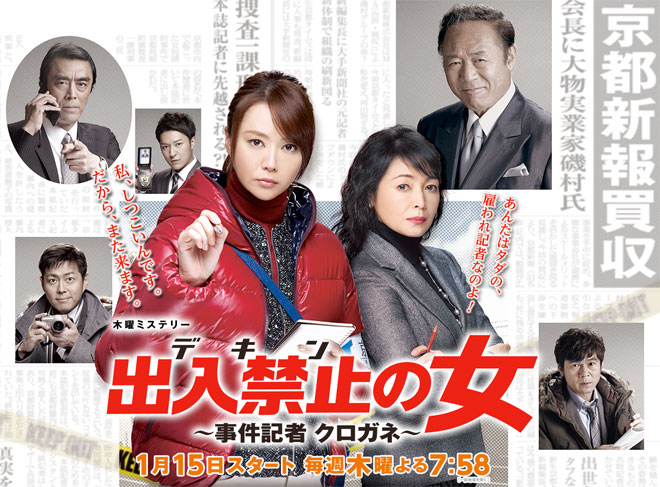 Story
Kurogane Shinobu is a well-known roving reporter for the Local News Section of Kyoto Shinpo. She has written numerous exposes and even won awards. Hardline scoops had been the centrepiece of Kyoto Shinpo till fairly recently. But with its acquisition by the businessman, Isomura Kenkichi, the newspaper’s name as well as its policy have undergone a complete change. It has become Kyoto Times, a sales-driven newspaper aimed at a mass audience. Although many reporters have left the Kyoto Times because they hated the change in policy, Shinobu stayed for some reason. She and the copy editor, Furubayashi Chikako, who is of the idea that self-deprecation is necessary to survive in a man’s world, get at each other’s throats. But she follows her own path and uncovers unexpected truths about different incidents through boldness and persistence. One morning, the section receives information about the discovery of the dead body of a host, Kurihara Makoto, at an apartment in Kyoto City. In the midst of this, Shinobu is ordered by Chikako to accompany rookie reporter, Mima Kensaku, for an interview. However, this is not for the murder case, but for an unimportant piece of news about a pet dog of a police officer killed in the line of duty being raised by his colleagues. After hearing the details, Shinobu suddenly pushes the interview to Mima and turns on her heel. “I’m banned from the police stations in this jurisdiction.” She visits the studio of an Osaka television station to meet Nanjo Natsuo, a former senior reporter during Kyoto Shinpo days who is now a popular host of a talk and variety show. In fact, Shinobu is concerned about a number of letters she had unexpectedly received from an anonymous sender, accusing Nanjo of tax evasion and being two-faced. Nanjo smiles at her and confides that he had recently received an offer from a Tokyo television station. Shinobu wonders why his wife, Michiru, who had continued to support him since the days at the newspaper, is not by his side. Furthermore, he seems to have an interest in the investigation of the host’s murder. Having a bad feeling about this, Shinobu makes Mima infiltrate the host club and gather information. They learn that Kurihara had an older lover, called Nakayama Kaori. Shinobu recognises this name. She is the older sister of the victim of a stalking-related murder seven years ago. This was the case that prompted Nanjo’s resignation from the newspaper even though he had been the ace of the section … …

Characters
Mizuki Arisa as Kurogane Shinobu
A roving reporter for Kyoto Times’ Local News Section. Because she is tenacious and fearless in interviews, she is not scared of any interview subject and would make a beeline for the person without a thought and for the inconvenience she might cause. This is the reason why she is banned from going in and out of many places. She is divorced and lives with her son, Ichiro, a junior high school student who is currently going through a rebellious phase and hardly talks to her. Although she is busy, she will prepare his meals for him without fail.

Zaizen Naomi as Furubayashi Chikako
The copy editor and deputy of Kyoto Times’ Local News Section. She used to be a well-known reporter of a leading national newspaper, but she lost in a competition to be promoted in the male-dominated company and ended up in her current job. She considers Kurogane Shinobu, who sticks to her own way, to be an eyesore and is harsh on her.

Komoto Masahiro as Kurumizawa Hiroshi
A reporter for Kyoto Times’ Local News Section. He is in charge of the prefectural police’s correspondents club. He is the type who obeys directions from the top and stayed on at the newspaper like Kurogane Shinobu. He believes that famous reporters are not required for the papers and regards Shinobu with hostility, but he makes an excellent reporter. He has independent sources even in the Kyoto Prefectural Police and gets access to background information.

Kobayashi Nenji as Isomura Kenkichi
The owner of Kyoto Times. Kyoto’s leading businessman. He bought Kyoto Shinpo and became its owner. He is responsible for the change in the newspaper’s policy from a hardline to a mass appeal. However, he is not turned off by immature idealists. Because he says yes and no depending on his mood, he creates confusion among the people around him.

Takuma Takayuki as Mima Kensaku
The son of a distinguished family which owns a long-established traditional Japanese confectionery store. He is in line to be the third company president, but he is ordered by his father to hone his skills and has been working at Kyoto Times. Because of his privileged upbringing, he cannot deny that has more to learn and cultivate. He is left to his own devices by Kurogane Shinobu who is supposed to be his trainer and spends his days running about in confusion. But he gets a close look at the way Shinobu works and starts to become conscious of a reporter’s righteousness.

This blog contains information and musings on current and upcoming Japanese dramas but is not intended to be comprehensive.
View all posts by jadefrost →
This entry was posted in TV Asahi, Winter 2015 Dramas and tagged Deiri Kinshi no Onna, Mizuki Arisa. Bookmark the permalink.