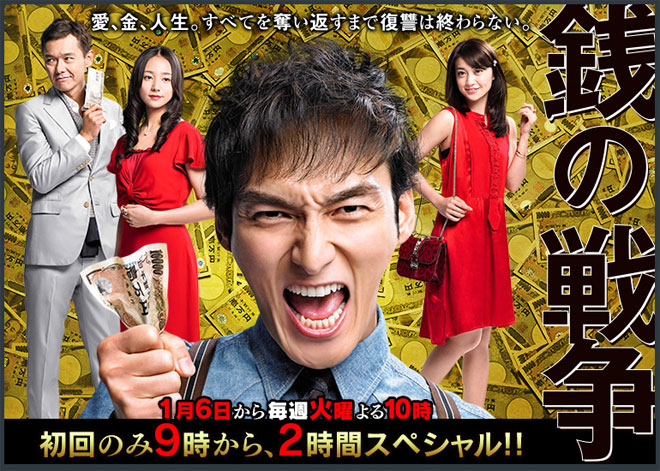 Story
Shiraishi Tomio, who works for a foreign securities firm and moves huge sums of money everyday, has a beautiful, intelligent fiancee Aoike Kozue. Life has been smooth sailing. But one day, he gets a phone call from his mother, Mihoko, telling him that the family’s factory issued checks that were not honoured and his father Takao, the company president, has gone missing. When Tomio hastily rushes over, the phone in the factory keeps rings with calls from debtors. It turns out that his father had even borrowed a lot of money from vicious moneylenders. The family is not able to get hold of Takao over the next few days. As his father’s joint guarantor, Tomio’s savings are spent on paying off a portion of the debt. Even so, that is not enough. He asks acquaintances to lend him money, but not a single person will help. Meanwhile, Tomio’s mother collapses from the strain of recent events. In addition, he is forced to resign from his company which has found out that he is mired in debt. At this moment, Tomio’s high school teacher, Konno Hiroshi, has been made to shoulder the debt of relatives again and is distressed. This is something he cannot tell his daughter, Mio, who complains that her temporary contact will be terminated sometime in the near future. With mounting irritation, Tomio begs for money at the shrine that his mother has turned to for spiritual support, and causes a commotion. On top of that, he pockets a 500 yen coin that had rolled to him. The person who dropped the coin happens to be Mio. Realising that Tomio stole it, she questions him. But the cash-strapped Tomio brushes her off. Several days later, Tomio is summoned by Kozue’s grandmother who is the chairman of the large financial group, Aoike Finance, and told to break off with Kozue for 10 million yen. Then he his younger brother, Kotaro, calls to say that their mother maybe able to undergo surgery, but … … Tomio loses everything – his money, job and fiancee – and becomes homeless. The path he chooses is that of the moneylenders who drove him to the very bottom. He ends up going to work for Akamatsu Daisuke who runs Akamatsu Finance. Akamatsu Finance looks like a normal company on the outside, but lends money at high interest rates behind the scenes. Tomio wants to regain everything that he and his father lost in their lives because of money, with money. Deciding that he will endure any kind of hardship for the sake of money, Tomio goes to great lengths to do whatever it takes to achieve his aims, even the illegal. Then he meets Mio who makes him realise before he is aware of it, that he has been obsessed with money, and special feelings start to blossom between the two of them. Furthermore, Kozue, who has complicated love-hate feelings for him shows up again. The three soon develop a complex romantic relationship. Faced with the truth of his father’s death, Tomio plots a heroic revenge. But will he be able to regain all that he has lost?

Cast
Kusanagi Tsuyoshi as Shiraishi Tomio
He was an employee at a foreign securities firm, but is saddled with his father’s debt and ends up losing his job as well as his fiancee, Aoike Kozue, because of money. A graduate of Tokyo University. He is good in mathematics and has exceptional memory for numbers.

Kimura Fumino as Aoike Kozue
Shiraishi Tomio’s fiancee. She is envied not only for her beauty but also her ability to excel in her work. Tomio and her are on the verge of having a wedding, but their engagement is called off because of Tomio’s father’s case. Although she hates Tomio, she cannot forget him and tracks his movements. She is expected to take over Aoike Finance from her grandmother someday.

Oshima Yuko as Konno Mio
A temporary staff who works in front desk, but fears that her contract will not be renewed. She can talk to her front desk colleague, Momoko, about anything. She lives with her father, Hiroshi.

Watabe Atsuro as Akamatsu Daisuke
He runs Akamatsu Finance which offers loans and consulting to small and medium-sized companies. He maybe a legitimate business operator who has even established an office, but there is also another side which lends money at illegally high interest rates to those who are truly desperate. He loves the smell of money.

Osugi Ren as Konno Hiroshi
Konno Mio’s father. Shiraishi Tomio’s high school teacher. He loves the Philosopher’s Walk and cannot leave those in trouble alone. He lends money and even ends up becoming a guarantor.

Tamamori Yuta as Shiraishi Kotaro
Shiraishi Tomio’s younger brother. He is working on energy-related research at graduate school, and intends to work at their father’s company at some point. After their father disappears, he lashes out at Tomio with what he really feels.

Shiga Kotaro as Shiraishi Takao
The father of Shiraishi Tomio and Kotaro. He runs ‘White Chemicals’. Running out of money because of the development of a specialty plastic, he gets driven into financial straits and disappears.

Judy Ong as Aoike Sawako
Aoike Kozue’s grandmother. She started off running a consumer finance business which grew into Aoike Finance through her method of acquiring companies and adding them to the group.

This blog contains information and musings on current and upcoming Japanese dramas but is not intended to be comprehensive.
View all posts by jadefrost →
This entry was posted in Fuji TV, Winter 2015 Dramas and tagged Goto Noriko, Kusanagi Tsuyoshi, Osugi Ren, Watabe Atsuro, Zeni no Sensou. Bookmark the permalink.

5 Responses to Zeni no Sensou