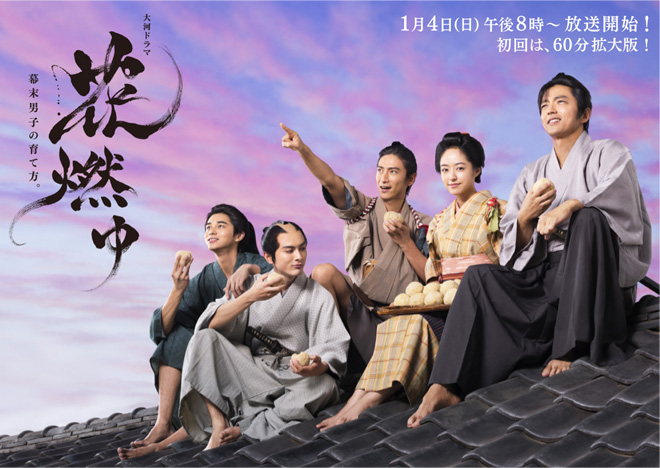 Story
The Meiji Restoration started with this family, the Sugis. In 1843 (Tenpo 14), Fumi, the fourth daughter, is born. The second son Torajiro, later Shoin, had become the adopted son of the Yoshidas, the family of his father’s younger brother, but returns to the Sugis upon his uncle’s death. Fumi feels proud of her elder brother who is a respected military strategy instructor even in their domain of Choshu. At the age of 11, he lectured on military strategy to the lord of the domain, Mori Takachika. Shoin is a genius expected to shoulder Choshu’s future. Some incident causes Fumi to bring the Confucian scholar Odamura Inosuke, later Katori Motohiko, in contact with her brother. In 1853 (Kaei 6), Shoin travels to Edo to study and ends up committing the crime of “fleeing his domain”. Fleeing the domain is a major crime of betraying the lord of the domain. The Sugis suffer because of the “crime” he committed. Concerned for Shoin’s welfare, Inosuke, who would become the husband of their second sister, Hisa, talks him into coming back from Edo and keeps pleading to the domain to lessen charges. In the end, Shoin is stripped of his samurai status and becomes the Sugi family’s ward. Fumi secretly admires Inosuke for trying to save her brother. Through the grace of Takachika, Shoin gains the freedom to study and he heads to Edo again. However, he plots to stowaway when Matthew Perry’s black ships arrive. Despite appeals to board a ship and go to America, his wish is not granted. With the failure of his stowaway attempt, Shoin surrenders and is incarcerated in a jail in Hagi. Although the Sugis are placed in a more precarious position because of Shoin’s unprecedented crime, Fumi has a renewed sense of family ties and she supports him by bring food and books. While in jail, Shoin straightens out the prisoners. After his release, he is placed under house arrest at the Sugis. Because of that, he gathers his family and the neighbourhood youth and starts lecturing on Mencius. Fumi scrambles to gather people in order to cheer her brother up. The youth who initially came to listen to the story of Matthew Perry and the black ships, grow fascinated with Shoin’s teachings which incorporate the latest world affairs and social conditions. A string of aspiring disciples gather. Then a confident, handsome young man, Kusaka Genzui, joins his school, Shoka Sonjuku. This would the fateful meeting between Fumi and Kusaka. Fumi is a favourite younger sister with young men such as Takasugi Shinsaku, Ito Hirobumi, Shinagawa Yajiro, Yamagata Aritomo who would subsequently run Japan. She marries Kusaka. However, their married life does not last long. The era is rapidly headed towards turbulence in the twilight years of Shogunate rule. As this intensifies, Shoin is executed in prison. His family and disciples have to face numerous difficulties. Meanwhile, conflict breaks out between a faction in Choshu domain which advocates respect for the Shogunate and a faction critical of the Shogunate. As Takasugi, Kusaka, Ito and as string of others get plunged into the fight, Fumi lives through the war in order to protect her family and Shoka Sonjuku … …

Characters
Inoue Mao as Sugi Fumi
The fourth daughter of the Sugis and younger sister of Yoshida Shoin. As the “female coordinator” of Shoka Sonjuku, she helps her brother and his students while she manages the school. She is also good friends with the students and marries one of them, Kusaka Genzui. After his death in the Kinmon Incident in 1864, she serves the Moris as the nanny of Mori Motonori’s heir, Motoakira. Following the Meiji Restoration, she changes her name to Miwa. She remarries her brother’s sworn friend, Odamura Inosuke, and creates a new life as the wife of a nobleman.

Osawa Takao as Odamura Inosuke (Katori Motohiko)
A Confucian scholar of the Choshu domain who had been studying Confucianism which prescribes the way of life of a samurai. Yoshida Shoin’s sworn friend. Shoin’s anxieties about the country’s future resonates with him. He marries the sister of Shoin and Sugi Fumi, Hisa. He is later selected to be a close aide of Mori Takachika, the lord of the domain. He becomes involved in the administration of Choshu and masterminds the Choshu-Satsuma alliance. He becomes the first governor general of Gunma. After Hisa dies, he remarries Fumi.

Iseya Yusuke as Yoshida Torajiro (Shoin)
Sugi Fumi’s elder brother. A military strategist who studies the art of war, and the head of Shoka Sonjuku. At the age of 11, he lectured in front of Mori Takachika, the lord of the Choshu domain. A promising genius. In 1854, he boards a black ship and tries to stowaway, but fails. He lives life in a prison for those of samurai status in his hometown of Hagi. After that, he is placed under house arrest, but he gathers many talented young men such as Takasugi Shinsaku and Kusaka Genzui, and learns with them. However, he is rounded up in the Purge of Ansei and put to death for criticising the Shogunate.

Kora Kengo as Takasugi Shinsaku
The eldest son of the distinguished Takasugi family. He studied at Meirinkan, the domain’s school, and then at Shoka Sonjuku. Described by Yoshida Shoin as a “talented man who will be a leader in the future”, he was well appreciated for his exceptional ability. After Shoin’s death, he went to Shanghai where he saw China being made use of by the major Western powers. China’s dismal state of affairs prompts him to throw himself into extreme activities in reverence of the emperor and expulsion of foreigners, together with Kusaka Genzui. He later forms the Kiheitai.

Higashide Masahiro as Kusaka Genzui
A samurai of the Choshu domain whom Yoshida Shoin praised as the country’s genius. He and Takasugi Shinsaku were touted as the best two at Shoka Sonjuku. At the age of 18, he marries Shoin’s sister Fumi and begins to live with the Sugis. Carrying on Shoin’s last wish after Shoin was executed, he becomes active as a leader of the faction which advocates the explusion of foreigners. He is defeated by the Aizu-Satsuma troops in the Kinmon Incident and commits suicide by sword.

Seto Koji as Yoshida Toshimaro
Called Shoka Sonjuku’s Four Heavenly Kings along with Takasugi Shinsaku, Kusaka Genzui and Irie Kuichi. He is an honest character, and Yoshida Shoin is exceptionally partial towards him. Because he is good at gathering information, he uses his connections with the Shogunate to obtain important information after he appears in Edo, and passes it on to Shoin.

Kaname Jun as Irie Kuichi
Called Shoka Sonjuku’s Four Heavenly Kings along with Takasugi Shinsaku, Kusaka Genzui and Yoshida Toshimaro. Because he is born to a low-ranking samurai family, he works to support the household, and is diligent in his studies. He is deeply devoted to Shoin, and follows him until the end.

Gekidan Hitori as Ito Risuke (Hirobumi)
A student of Shoka Sonjuku. He was born to a poor farming family but because his father succeeded a low-ranking samurai family, he is by extension a low-ranking samurai. After Yoshida Shoin’s death, he secretly studied abroad in England with Inoue Kaoru and others. Following his return to Japan, he moved rapidly to campaign for the overthrow of the Shogunate. After the Meiji Restoration, he becomes the country’s first prime minister.

Yuka as Sugi Hisa
Sugi Fumi’s elder sister. She becomes the wife of Odamura Inosuke, the sworn friend of their older brother, Yoshida Shoin. During the turbulence in the twilight years of Shogunate rule, her husband is held in a prison in Hagi for those of samurai status. She puts on a brave front even when swamped by the Shogunate army and gets a name for herself as the “virtuous wife”.

Harada Taizo as Sugi Umetaro
The eldest son of the Sugis. He understands the intentions of his younger brother, Shoin, early on, and would send money even if he has to economise if Shoin consults him about travel expenses. After Shoin is jailed, he keeps supporting him by delivering the books he wants. He lives through the chaos of the twilight years of Shogunate rule and revives Shoka Sonjuku.

Nagatsuka Kyozo as Sugi Yurinosuke
The father of Shoin, Fumi, Hisa and Umetaro. A low-ranking samurai with a stipend of 26 koku. As a result of this meagre salary, he has to work in the fields in order to support his large family. His love for reading is unparalleled and he will not do without his book even as he processes the rice. Wanting to do something about not being able to read during farm work, he would make his children read aloud and listens to them while he plows the fields.

Dan Fumi as Sugi Taki
The mother of Shoin, Fumi, Hisa and Umetaro. Although she married the poor Sugi Yurinosuke, she is a gentle mother who cheerfully supports the family with her magnanimity. When Shoin begins to teach at Shoka Sonjuku, she actively involves herself in the school by taking care of the students’ meals and learning too.

Okuda Eiji as Tamaki Bunnoshin
The younger brother of Sugi Yurinosuke, and uncle of Shoin and Fumi. A military tactician of the Yamaga school and the founder of Shoka Sonjuku. He trains a young Shoin, who would take over the reigns of the Yoshida family, hard in education. After the Meiji Restoration, he reopens Shoka Sonjuku and devotes all himself to education.

Kitaoji Kinya as Mori Takachika
The 13th lord of the Choshu domain. He receives a lecture on military strategy from a 11-year-old Yoshida Shoin. Recognising Shoin’s genius, he keeps protecting him from behind the scenes. He selects capable men to be at the centre of his government and restores the domain’s finances. He not only lets his vassals debate matters fully but also often trusts their judgement and agrees to go along with them. He also focuses his effort on the education of the domain’s samurais such as the relocation and expansion of the school, Meirinkan.