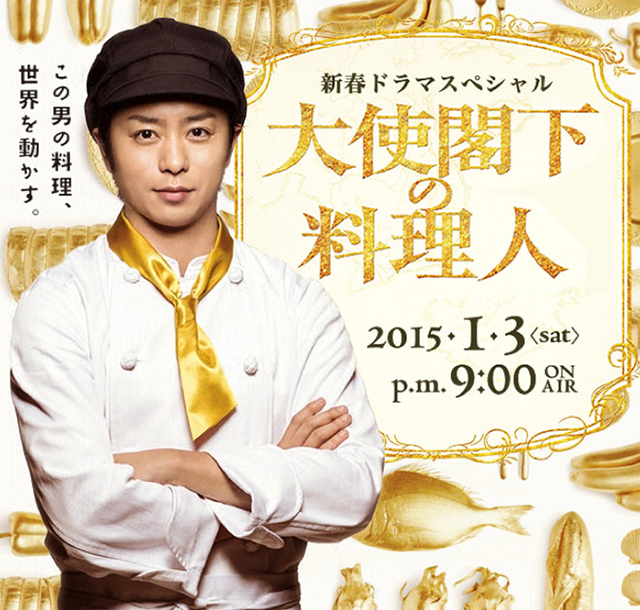 Date: From 9.00 p.m., 3 January 2015
Original Work: Taishi Kakka no Ryourijin by Nishimura Mitsuru
Scriptwriter: Izumi Yoshihiro (Gokuaku Ganbo, Kurokouchi, Tokkan)
Cast: Sakurai Sho, Goriki Ayame, Okura Koji, Kato Shigeaki, Takenaka Naoto, Hirosue Ryoko, Nishida Toshiyuki
Synopsis: Osawa Ko (Sakurai Sho) and Ly Te Ran (Goriki Ayame) are talking about something with the Vietnamese and choosing cooking ingredients at a bustling market in Hanoi, Vietnam. Ko is a chef at the residence of the Japanese ambassador to Vietnam. There are exclusive chefs in the Japanese embassies around the world. The food served to foreign dignitaries, ambassadors and prime ministers are left entirely to this one chef. Ran is Ko’s half-Vietnamese assistant. When Ko and Ran return to the embassy after their marketing, Furuta Seiichi (Okura Koji), a staff who is a Vietnamese translator, tells them that Ko and the chef of the French ambassador to Vietnam are to have culinary showdown. He says the judge will be Nguyen, the Vietnamese Minister of Foreign Affairs. This is very bizarre, but a “diplomatic agenda” is hidden behind this. At the Japan’s Ministry of Foreign Affairs on that same day, Eguchi Satoru (Kato Shigeaki), an administrative officer responsible for Vietnam, is talking about promoting the bullet train to Vietnam. Sales of bullet trains overseas is a national project. The culinary showdown is a pretext for inviting Foreign Minister Nguyen to the embassy and creating the opportunity to have this conversation. The Japanese embassy in Vietnam is excited. On the other hand, Ko hears Nguyen’s name and recalls the first time he cooked a meal as the ambassador’s chef. Ko used to be the sous chef of a first-class hotel. In the hotel’s kitchen two years earlier, he stood in front of plates with food left on them and reported to the head chef, Murakami Shinzo (Takenaka Naoto), “I suppose my feelings are not reaching the guests.” They were top chefs cooking with the best food ingredients. But a hotel has to cater to hundreds of guests. If Ko could, he would like to see the face of each guest and put a lot of thought into the preparation of his or her meal. He had developed this thought at some point. But Murakami did not acknowledge him. While Ko was agonising over this, he happened to see a pamphlet for the recruitment of a chef for the official residence and thought, “Maybe I will be able to prepare food which conveys my feelings with this.” Ko decided to leave his job as the sous chef and work as a chef at the residence of the Japanese ambassador. His wife Hitomi (Hirosue Ryoko) was naturally against this. However, she fell in love and married him knowing that he is hopelessly into cooking. In the end, she and their young daughter sent him off with their blessings. Ko’s workplace as the chef of an official residence turned out to be the Japanese embassy in Vietnam. The Japanese ambassador Kuraki Kazuya (Nishida Toshiyuki) ordered Ko, who had just assumed his duties, to prepare food for a banquet which Foreign Minister Nguyen had been invited. Kuraki told Ko, “Everything has significance on the table of diplomacy.” Kuraki is the Foreign Ministry’s ace and was dispatched in order to improve stagnant ties with Vietnam. In fact, there will be an election to choose non-permanent members of the UN Security Council. Whether it will be Japan or India will be determined by the votes of each country. Japan needs Vietnam’s vote. Given the circumstances, it is not simply about serving food that tastes delicious … …
Official Website: www.fujitv.co.jp/taishikakka

This blog contains information and musings on current and upcoming Japanese dramas but is not intended to be comprehensive.
View all posts by jadefrost →
This entry was posted in Fuji TV, Winter 2015 Drama Specials and tagged Nishida Toshiyuki, Sakurai Sho, Taishi Kakka no Ryourijin. Bookmark the permalink.