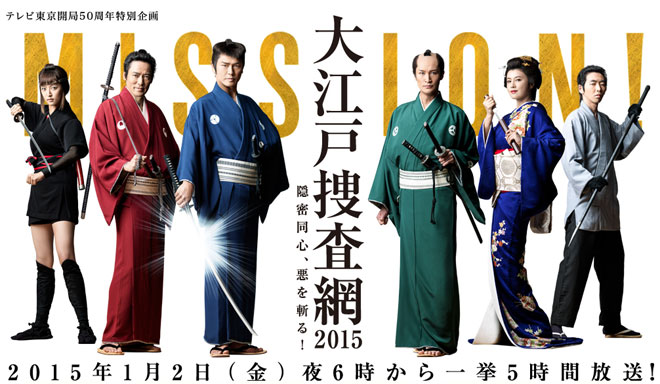 Date: From 6.00 p.m., 2 January 2015
Scriptwriter: Yamamoto Mutsumi (Yae no Sakura, Gegege no Nyoubou, Top Sales)
Cast: Takahashi Katsunori, Fujiwara Norika, Matsuoka Masahiro, Kato Masaya, Nagai Masaru, Haru, Murakami Hiroaki, Shinkawa Yua, Natsuna, Emoto Tokio, Satomi Kotaro, Sagawa Tetsuro, Nishimura Masahiko, Sasano Takashi, Enoki Takaaki, Miyata Ichirota, Kobayashi Nenji, Katase Rino, Tani Kanon, Yamaguchi Izumi, Kondo Yoshimasa, Sugi-chan, Koshiba Fuka, Tsuruta Shinobu, Yamada Jundai, Ozawa Kazuyoshi
Synopsis: In Edo, a steady stream of people with eyes on career success and concessions, visit the mansion of Tanuma Okitsugu (Sagawa Tetsuro). He is a senior councillor of the Council of Elders and lord of Sagara domain. During the Tanuma era, a mercantile system was adopted to stave off the budget deficits of the faltering Tokugawa shogunate. But it is one of widespread corruption. However, in the third month of 1784, Okitsugu’s eldest son and heir Tanuma Okitomo, a junior councillor, is slashed inside Edo Castle by Sano Zenzaemon, a samurai in the service of the Tokugawa shogunate, and dies a few days later. This case would herald the end of the Tanuma era. At this time, Japan is visited by a cataclysmic event. With dissatisfaction with the political administration reaching boiling point, rioting townspeople destroy rice stores. Learning about the riots, Akikusa Shinjuro (Matsuoka Masahiro), a constable of the Kitamachi Magistrate’s Office, and the playboy Jumonji Koyata (Takahashi Katsunori) who calls himself Sanjiro, show up to protect the townspeople. They are playboys, but capable men. Furthermore, Naito Kageyu (Satomi Kotaro) also steps in to help and the people safely escape. However, Koyata and Shinjuro are still crossing swords. A mysterious trio – Tanuma Sanae (Haru), Hiraga Gennai (Kobayashi Nenji), Haruro (Nagai Masaru) – watch what is happening from the sidelines … … Koyata who is evenly matched in skills with Shinjuro gives up the fight, but gets tied up like a criminal. Having seen through Koyata’s skills and chivalry, Kageyu comes to the prison and talks about wanting Koyata to work under him for the sake of upholding law and order in Edo. This is the command of Matsudaira Sadanobu (Kato Masaya), the chief senior councillor and lord of the Shirakawa domain. Sadanobu hates the Tanuma era and has ordered Kageyu to form a unit of undercover constables so as to eradicate the evil that is rampant in Edo. Koyata must not speak a word of his role to anyone. He will typically live as a common person in order to protect the people of Edo and lay down his life and fight when the time comes … … Koyata decides to accept Kageyu’s offer. The geisha Inazuma Oryu (Fujiwara Norika), fishmonger Shiranui Okichi (Natsuna), Western medicine doctor Sakakibara Chouan (Emoto Tokio) and wandering samurai Isaka Juzo (Murakami Hiroaki) have similarly accepted this command. Given the name, undercover constables, they get into action to protect Edo. As they clash with Shinjuro who later joins them, a wave of riots breaks out in Choshu, Yoshiwara. But behind this is a power struggle between Sadanobu, a grandson of the eight shogun Yoshimune, and Hitsotsubashi Harusada (Nishimura Masahiko), the father of the eleventh shogun, Tokugawa Ienari (Ozawa Ryota). The two men had conspired to drive Tanuma out. But now that Ienari is the shogun, Harusada plots to oust Sadanobu who has become a hindrance. Koyata and the other undercover constables rise up for the sake of the peace of the oppressed people of Edo … …
Official Website: www.tv-tokyo.co.jp/ooedo.sousamou

This blog contains information and musings on current and upcoming Japanese dramas but is not intended to be comprehensive.
View all posts by jadefrost →
This entry was posted in TV Tokyo, Winter 2015 Drama Specials and tagged Enoki Takaaki, Kato Masaya, Kobayashi Nenji, Nishimura Masahiko, Oedo Sousamou, Sasano Takashi, Takahashi Katsunori. Bookmark the permalink.