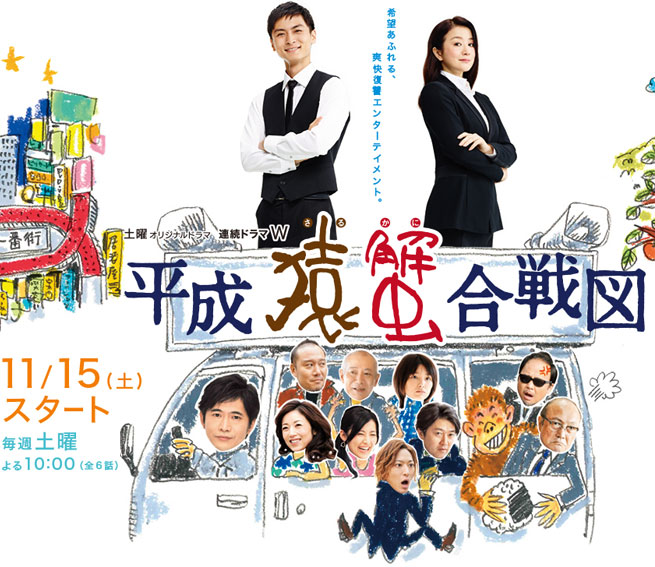 Story
A hit-and-run case occurs at Kabukicho in Tokyo. Hamamoto Junpei, a bartender who witnessed the incident, realises that the man who was arrested is a different person from the man who was at the scene. It seems that the real culprit is international cellist Minato Keiji and his older brother is taking the rap. Aiming to get rich quick, Junpei and Mashima Tomoki, the host he treats as a younger brother, decide to blackmail Minato. But Minato’s capable manager Sono Yuko stands in their way. Overwhelmed by her quick thinking and presence, Junpei readily admits defeat. On the other hand, Yuko takes interest in Junpei’s character. Junpei is somehow loved by everyone. Soon, the consummate villain who is Yuko’s nemesis shows up. He is Tokuda Shigemitsu, a lawmaker of the Lower House. Because of this unintended meeting of two people who live in different worlds, those around them get involved. Minato; Mizuki, the hostess who has come to Tokyo in pursuit of Tomoki; Yamashita Miki, the proprietress of the Korean club where Junpei works; Kosaka, Miki’s boyfriend and former gangster; and Tomoka, Minato’s niece who is a university arts student. An uproar that will shake up Japan has begun.

Characters
Suzuki Kyoka as Sono Yuko
The capable manager of cellist Minato Keiji. A beautiful and intelligent woman. She has a strong sense of justice and is feared by the people around her because she is harsh on herself as well as others. She develops an interest in Hamamoti Junpei who is loved by those around him.

Kora Kengo as Hamamoto Junpei
A bartender for the club ‘Ran’ at Kabukicho in Shinjuku, Tokyo. A native of Akita prefecture. He has a simplicity of character such that he is loved by everybody. He came to Tokyo with the declaration that he will become somebody. He meets Sono Yuko and through an unexpected turn of events, faces the challenge of the national elections.

Hagiwara Masato as Minato Keiji
A cellist who hails from Akita prefecture. He is a symbol of Japan. Although he appears genial, he is a man with a shadow. He has been financially supporting his older brother Hiroshi and niece Tomoka, but … …

Takaoka Saki as Yamashita Miki
The proprietress of the club ‘Ran’ that Hamamoto Junpei works at. She is like a caring older sister.

Ishibashi Renji as Tokuda Shigemitsu
A ruling party lawmaker of the Lower House. His base is Akita prefecture. He has designs on the redevelopment of Kabukicho.

Ikeda Narushi as Okuno Hiroshi
Minato Keiji’s older brother. A former teacher who was arrested because he was mistakenly arrested for being a molester.

Nakahara Takeo as Saotome Osamu
The secretary general of the opposition party, the People’s Welfare Party. He aims to seize political power.

This blog contains information and musings on current and upcoming Japanese dramas but is not intended to be comprehensive.
View all posts by jadefrost →
This entry was posted in Fall 2014 Dramas, WOWOW and tagged Hagiwara Masato, Heisei Saru Kani Kassenzu, Ishibashi Renji, Kora Kengo, Makita Sports, Suzuki Kyoka. Bookmark the permalink.