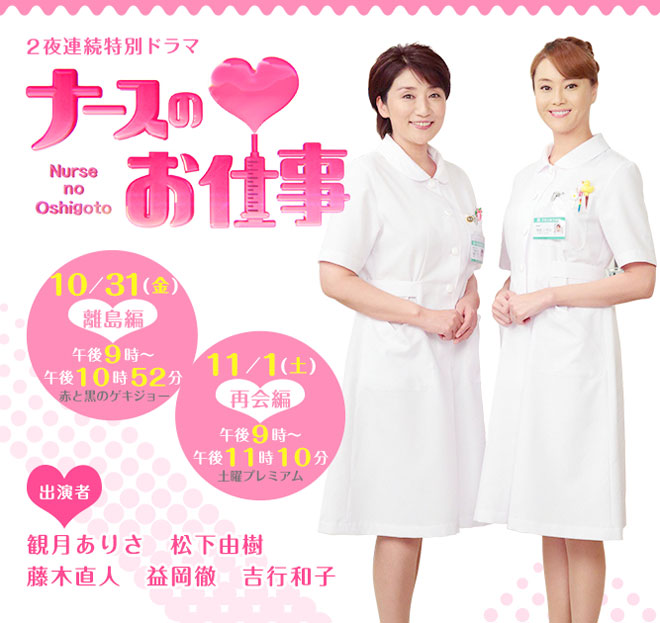 Date: From 9.00 p.m., 31 October & 1 November 2014
Scriptwriter: Morosawa Kazuyuki (Keiji 110 kg, Shiawase ni Naritai, Nurse no Oshigoto Series)
Cast: Mizuki Arisa, Matsushita Yuki, Fujiki Naohito, Okada Koki, Abe Tsuyoshi (part 1), Masuoka Toru, Kusamura Reiko (part 1), Yoshiyuki Kazuko, Kaname Jun (part 2), Ishihara Yoshizumi (part 2), Ito Kazue (part 2)
Synopsis: The married couple Asakura Izumi (Mizuki Arisa) and Takasugi Kentaro (Fujiki Naohito) provide consultation to island residents at a clinic situated on a hill overlooking the sea. The two of them who met at Wakabakai General Hospital as nurse and doctor. They eventually got married and started a clinic in the hometown of Kentaro’s late mother. 12 years have gone by. Izumi’s former instructor, Ozaki Shoko (Matsushita Yuki), who is now the head nurse of Wakabakai General Hospital’s Ward 1, comes to the island for a vacation after taking the specialist nurse exam. Izumi and Shoko are overjoyed to meet again after a long time and in a gleeful mood at the harbour. That night, Izumi tells Shoko about an insecurity. Kentaro had often been called away to Wakabakai Hospital in the past two years and she thinks he is hiding something. The next morning, Shoko directly asks Kentaro about Izumi’s worry, but she is given the slip. Even so, the couple is on good terms. Seeing this, Shoko gives her boyfriend Nagashima Junpei (Masuoka Toru), the head of Wakabakai General Hospital’s Department of Surgery, a call, but cannot conceal her annoyance at his lukewarm response. At the same time, Izumi’s island life is refreshing to Shoko. Samejima Tome (Kusamura Reiko), who is rumoured to be the “Witch of the Cape”, cherishes Izumi like a daughter. There is also the pleasant youth Anzai Ryota (Abe Tsuyoshi) who has been volunteering for Takasugi Clinic’s private emergency response team. Surrounded by such cheerful islanders, Izumi is bright and animated. Several days later, Mizushima Ryutaro (Okada Koki), who works at Wakabakai Healthcare, and Nagashima arrive on the island. Mizushima says he is visiting for Kentaro’s interview. Kentaro had applied for training overseas in order to learn the latest in medical care in the US. Shoko is livid that Kentaro is proceeding without letting Izumi know. However, Izumi’s response is different. On the other hand, an incident which causes a flurry at Takasugi Clinic happens as a typhoon approaches the island … …
Official Website: www.fujitv.co.jp/nurse

This blog contains information and musings on current and upcoming Japanese dramas but is not intended to be comprehensive.
View all posts by jadefrost →
This entry was posted in Fall 2014 Drama Specials, Fuji TV and tagged Fujiki Naohito, Matsushita Yuki, Mizuki Arisa, Nurse no Oshigoto. Bookmark the permalink.