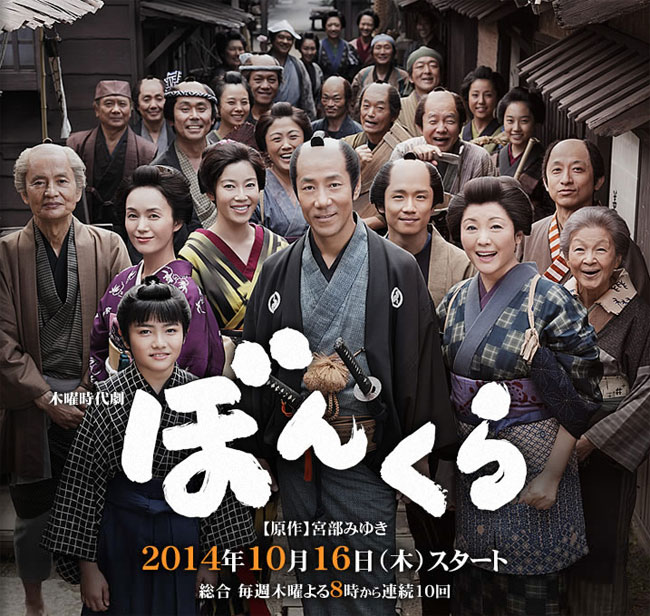 Story
It is Honjo Fukagawa constable Izutsu Heishiro’s daily routine to drop in for a short visit at the boiled dishes shop at a tenement house in Fukagawa Kita-machi. The Izutsus have no children and Heishiro’s wife has been contemplating the adoption of her nephew, Yuminosuke. One night, the murder of a greengrocer occurs at the tenement house and Kyubei, the housing agent, simply disappears into thin air. Heishiro investigates and learns that Kyubei had disappeared because of compelling circumstances hidden behind the case. The murder marks the start of a series of disappearances of the residents of a tenement house. Feeling suspicious about these cases as well as sympathy for the residents, the constable Izutsu Heishiro starts to investigate the background of the cases on his own. Picking on the wisdom of his nephew Yuminosuke as he searches, Izutsu soon realises that the mystery of a case which occurred 17 years ago lies hidden behind it. He identifies the landowner Minatoya Soemon as the person who holds the secret … …

Characters
Kishitani Goro as Izutsu Heishiro
A constable of the Minami-machi Magistrate’s Office. He patrols Honjo Fukagawa. He is lazy and detests getting involved in complicated matters. He always idles his time away at Otoku’s boiled dishes shop on the pretext of doing his rounds. His family is his wife, Shino, and loyal attendant, Koheiji. There is ongoing talk about adopting Shino’s nephew, Yuminosuke.

Okunuki Kaoru as Shino
Izutsu Heishiro’s wife. The daughter of a constable of the magistrate’s office. She appears to be calm and gentle, but is a person of firm character by nature. She is contemplating the adoption of Yuminosuke, her elder sister’s son, and keeps indirectly working on Heishiro.

Osugi Ren as Masagoro
A follower of the well-known Ekoin’s Moshichi who is an expert in arrests. He serves in place of the elderly Moshichi. A cool and collected paid police informant who is capable and quick on the uptake. He gets acquainted with Izutsu Heishiro by chance and helps in the search.

Kazama Shunsuke as Sakichi
The tenement house’s new housing agent. He is young but intelligent and quick witted. He is the child of Minatoya Soemon’s niece, Aoi. After Aoi eloped, he was placed with the gardener and became a gardener, but agrees to serve as the agent for the tenement house at Minatoya’s request.

Matsuzaka Keiko as Otoku
A resident of the tenement house. She is a widow and runs a shop selling daily boiled dishes. She is the typical compassionate, caring keeper of a tenement house. Because she is the facilitator, she relies on Izutsu Heishiro in various ways.

Musaka Naomasa as Nihei
A paid police informant with a bad reputation. He is wily and vindictive. He has also made innocent people into criminals through coercive investigations. He hates Minatoya Soemon and is waiting for an opportunity for revenge.

Tsurumi Shingo as Minatoya Soemon
The owner of the big shop, Minatoya, and the landlord of the tenement house. He sends Sakichi as the new housing agent in place of the missing Kyubei. He is a cunning, inscrutable man.

This blog contains information and musings on current and upcoming Japanese dramas but is not intended to be comprehensive.
View all posts by jadefrost →
This entry was posted in Fall 2014 Dramas, NHK and tagged Bonkura Series, Kazama Shunsuke, Kishitani Goro, Matsuzaka Keiko, Miyabe Miyuki, Okunuki Kaoru, Osugi Ren. Bookmark the permalink.