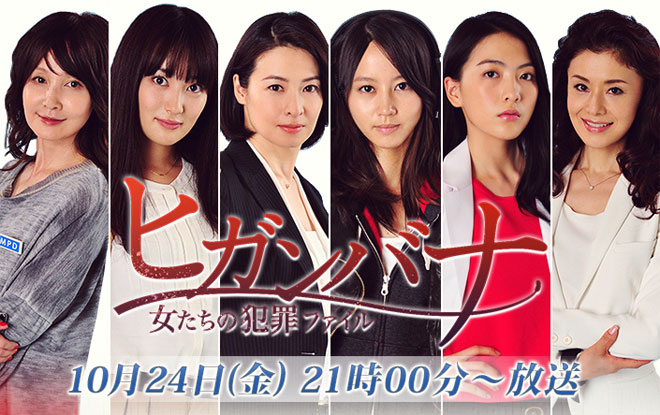 Date: From 9.00 p.m., 24 October 2014
Scriptwriter: Yoshizawa Tomoko (Dr DMAT, Kuro no Onna Kyoushi, Karyuu no Utage)
Cast: Horikita Maki, Dan Rei, Jiyoung, Takanashi Rin, YOU, Daichi Mao, Takaoka Saki, Ishino Yoko, Kokusho Sayuri, Azuma Mikihisa, Ichikawa Tomohiro, Kimoto Takehiro, Takahashi Keiko, Sano Shiro, Sugimoto Tetta
Synopsis: Kinomiya Nagisa (Horikita Maki) is a detective with the Tokyo Metropolitan Police Department’s Seventh Investigation Division. She is attuned to the evil intentions of other people and usually wears headphones to block these out because they interfere with her life. This ability distresses Nagisa, but she exercises it in investigations. She gets clues to arrest criminals by sensing a criminal’s urge to kill or a suspect’s hidden evil intent at a crime scene. The Seventh Investigative Division which Nagisa belongs to, was established with the objective of taking countermeasures against female criminals and female victims. It is a unit made up of idiosyncratic women from the head of the division, Segawa Sumire (Daichi Mao), to Nagisa, Minegishi Yukino (Dan Rei), Ito Rin (Takanashi Rin), Yanagi Sachiko (YOU), and forensic researcher Nagami Karuko (Jiyoung). The male detectives who do not look kindly upon the presence of the Seventh Investigative Division, insultingly liken the women to the poisonous flower, the red spider lily. One day, a threat is delivered to each media outlet, hotel in Tokyo, and wedding place. It says, “If all wedding ceremonies to be held in the metropolis on 26th of this month are not cancelled, people will die” The Tokyo Metropolitan Police Department start to investigate this warning of murders. The wedding ceremony of the famous plastic surgeon Eto Tamaki (Kokusho Sayuri) is scheduled on that date. She declares that she will not call off the ceremony. On that day, the First Investigative Division guards her wedding. However, a murder occurs at the hotel venue. The detectives of the Seventh Investigative Division head to the scene. The victim is a female in her 30s. Nagisa feels the murderous intent of the criminal when she sees the dead body. She deduces that the criminal is a man with financial trouble. On the other hand, the investigation task force considers the profile of the murder suspect who sent the threat, and judges that it is a female who has a grudge against marriages. The criminal soon appears at the police station. As Nagisa had seen it, it is a crime by a man who had been cheated of money by the victim and has no connection to the threat. Meanwhile, Tamaki is poisoned to death. Nagisa tries to read the murderer’s mind at the crime scene, but is for some reason unable to detect any malice. While making enquiries around Tamaki, her acquaintance Inoue Mayumi (Ishino Yoko) emerges in the line of investigation. Nagisa meets Mayumi and senses her evil intentions towards Tamaki. However, Mayumi has a conclusive alibi for the day and time that Tamaki was murdered … …
Official Website: www.ntv.co.jp/higanbana

This blog contains information and musings on current and upcoming Japanese dramas but is not intended to be comprehensive.
View all posts by jadefrost →
This entry was posted in Fall 2014 Drama Specials, NTV and tagged Dan Rei, Higanbana Series, Sano Shiro, Takaoka Saki, YOU. Bookmark the permalink.