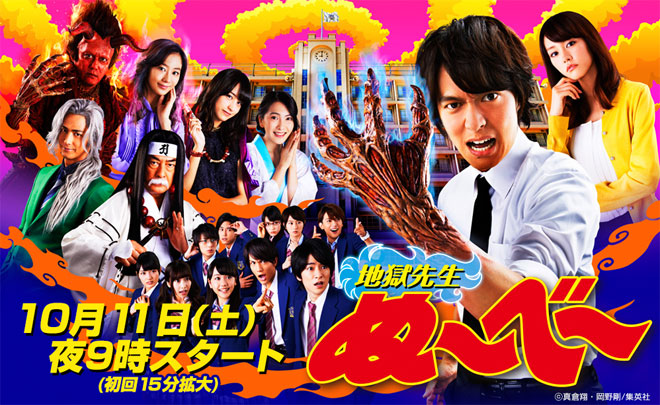 Story
Nueno Meisuke, Domori High School’s newly-appointed teacher, arrives in the town guided by a feeling of foreboding. Nicknamed Nube, he cares for his students more than others but his enthusiasm tends to prove futile because of his slight clumsiness. He becomes the form teacher of the new Class 2/3. However, the students are enamoured with Tamamo Kyosuke, a pretentious, handsome new teacher. Furthermore, Nube shows such an unusual interest in the school’s Seven Wonders just after he takes up his new position that even his beautiful fellow teacher Takahashi Ritsuko gets suspicious. Meanwhile, there is a problem with a student of Class 2/3. Noriko, one of the female students who is called Noro-chan, seems to be spoken to in a strange voice by something in the mirror. Feeling as if the friends around her have stuck her with a meek, inconspicuous character, Noriko is very bothered about her identity and loses sight of herself. Catching the hint that something has worked its way into the darkness of her mind, Nube secretly starts patrolling on the school grounds. In fact, there is another side to Nube. He is the only teacher in Japan with psychic powers which can kill monsters. When his students are attacked by monsters and evil spirits which take up residence in weak human hearts, he would risk his life to protect them by making use of his left hand. In the midst of this, Kurita Makoto, a fan of paranormal phenomenon declares his intention to determine if the “mirror of truth” is one of Domori High School’s Seven Wonders and the students sneak into the school at night.

Characters
Maruyama Ryuhei as Nueno Meisuke (Nube)
The form teacher of Domori High School’s Class 2/3 and a Japanese language teacher. Even though he cares for students more than anyone else, he is tactless, has poor timing and is weak with females too. He is merely regarded as a peculiar and questionable teacher by his students because he is not open about being full of righteousness. He is actually the only teacher in Japan with psychic powers. The power of the devil is sealed in his left hand and he usually hides his left hand in a black glove.

Kiritani Mirei as Takahashi Ritsuko
A chemistry teacher at Domori High School and the school idol. She does not believe in psychic powers and unscientific things. Although hauntings horrify her, she somehow ends up associated with paranormal phenomenon and shows greater panic than the students. She detests Nube who only talks about spirits, but some incident causes her to start opening up to him … …

Hayami Mokomichi as Tamamo Kyosuke
A domestic science teacher at Domori High School. He has enormous popularity with the students because of his perfect looks and personality are perfect, and Takahashi Ritsuko also has faith in him. But he is actually a 400-year-old fox spirit and has come in order to control the human world . His rivalry with Nube starts to deepen as a result of his integrity and personality despite the code of the fox spirit which is to “bring harm to the world of humans”.

Yamamoto Mizuki as Hayama Izuna
An apprentice shaman who left home and came up to Tokyo. She lives for free at Domori temple. She has psychic powers and it is her dream to become famous and make a lot of money. She reacts against Nube’s greater powers and views him as her enemy. But she has few successful exorcisms with her half-baked power and the incidents end up getting bigger. She frequently has to be rescued by Nube.

Jiyoung as Yukime
Nube’s self-proclaimed fiancee. A snow monster. She has been harbouring feelings for Nube ever since she was saved on a snowy mountain five years ago and chases after him. Although this is one-sided, she is very pushy in her desire to monopolise him for herself and causes trouble in the human world.

Yuka as Minako-sensei
Nube’s form teacher in elementary school who lost her life while saving Nube who was being possessed by a powerful evil spirit. She brings the demon, Baki, in Nube’s left hand under control from within. She is like the holy mother who wholeheartedly believes that human nature is fundamentally good. She roots for Nube who is showered with the Baki’s abuse.

Sakagami Shinobu as Baki
An envoy from hell and the eldest of three demon brothers. He has been sealed in Nube’s left hand. His stinging abusive language draws troubled, distracted Nube to the other dimension. Such behaviour (in uncharacteristic demon logic) is all too apt reasoning (in the theory of human nature as fundamentally depraved).

Takahashi Hideki as Mugenkai Jikuu
A popular and famous psychic on TV programmes. He used to be a well-meaning psychic who would save people without any charge. However, when he needed a large sum of money because of his wife’s illness, he was let down and despaired of the ugliness of the human heart. After that, he became the embodiment of greed, trusting nothing but money. He despises Nube whose policy is not to use psychic powers for money.

This blog contains information and musings on current and upcoming Japanese dramas but is not intended to be comprehensive.
View all posts by jadefrost →
This entry was posted in Fall 2014 Dramas, NTV and tagged Hayami Mokomichi, Jigoku Sensei Nube, Kiritani Mirei, Yamamoto Mizuki, Yuka. Bookmark the permalink.