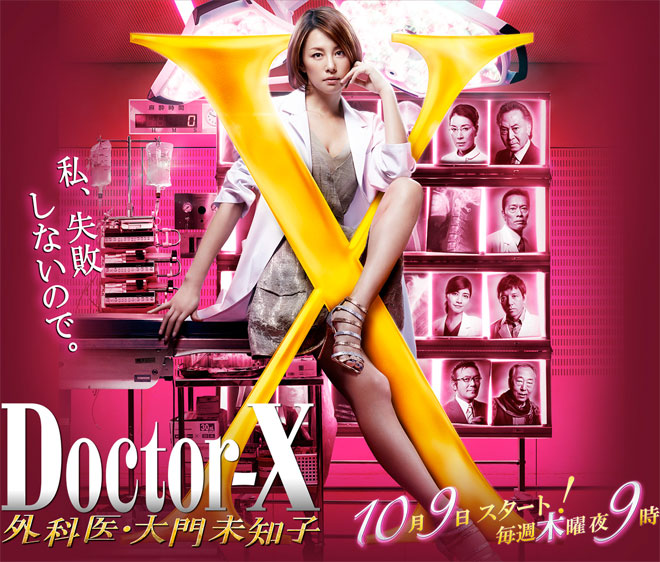 Story
Daimon Michiko is a freelance surgeon who does not belong to a university hospital’s medical department. She goes around various hospitals while affiliated with Kanbara Akira’s shady Good Doctors Agency. One day, Michiko is visiting a southern island when she encounters passengers who were injured in a luxury liner accident. One of them is Busujima Ryunosuke, the former hospital director of Teito Medical University’s Third Hospital, which she was sent to at one time. Michiko quickly attends to Busujima. That is when she notices something abnormal. Busujima is later admitted to the National Higher Medical Care Centre, a technologically advanced hospital which the country has staked its prestige on in order to show Japan’s medical technology to the world. He has a huge heart tumour as well as a ruptured hepatocellular carcinoma. There is a big upheaval regarding this surgery at a preoperative conference because a futile power struggle between the factions of Totei University Hospital and Saikyo University Hospital, which represent Japan’s east and west, is intensifying at the centre. This struggle for supremacy has reached the point that it makes even Tendo Yoshihito, the director of the centre, fret. The two factions naturally fight to be in charge of Busujima’s surgery and will not give an inch. Michiko suddenly shows up at this savage conference and boldly declares, “Let me operate. He’s my patient.” However, she gets thrown out unceremoniously. Right after that, the situation undergoes a complete change. The men of both factions hire Michiko and contemplate how to tip the power play in their favour. In the end, Michiko is employed as Busujima’s attending physician. But of all things, the man himself is dead set against being operated by her … … Following her own conviction to save the lives before her and to keep doing this as long as she lives, Michiko pushes on and starts to shake things up again.

Characters
Yonekura Ryoko as Daimon Michiko
A freelance surgeon. Not affiliated to any university hospital’s medical department, she moves around to various hospitals while attached to Kanbara Akira’s dodgy doctors’ agency. She observes working hours strictly, never accepts chores where a medical license is not needed, and is also uninterested in the power struggles characteristic of hospitals. Her fees are several orders of magnitude higher but her skills as a surgeon are topnotch. She has absolute confidence in her own skills. Because she speaks her mind without hesitation or fear of anyone, she does not get on well with the staff of the medical department. Her interest and special skill is surgeries. She is entirely weak in everything else. There are rumours that she was a ship’s doctor and an army doctor besides being a hospital doctor. She has contacts in unexpected places.

Endo Kenichi as Ebina Takashi
The head of the surgery department of the National Higher Medical Care Centre’s east wing. A member of the Totei University faction. He received glowing praise as the surgeon of the multiple organ extraction and tumour excision operation which Daimon Michiko had actually performed, and had a lucky break. He is the typical sort who is firm with subordinates and weak against superiors.

Uchida Yuki as Jonouchi Hiromi
A cool woman who possesses sure skills as an anesthetist. She had been working at Teito Medical University’s Third Hospital but turned freelance under the influence of Daimon Michiko as well as the break up of the hospital’s department of surgery. She now belongs to Kanbara Akira’s doctors agency. A single mother who is raising a daughter.

Katsumura Masanobu as Kaji Hideki
The deputy head of the surgery department of the National Higher Medical Care Centre’s east wing. A member of the Totei University faction. His skills are so good that he is called the “laparoscope magician”, but he is stingy. He was relegated to Teito Medical University’s Takamatsu branch hospital for once assisting in Daimon Michiko’s surgery.

Nishida Toshiyuki as Hiruma Shigekatsu
He was dismissed from his position as the head of Teito Medical University Hospital’s Surgery Management Department, and succeeded in crossing over to be the director of Saikyo University Hospital. He has a genial exterior, but is a heartless person who will resolutely cast away dissenters. He has a longstanding grudge against Daimon Michiko and Totei University.

Nakao Akira as Kurobe Tetsuya
The president of the National Higher Medical Care Centre. He stirs up the east-west conflict, motivated by personal gain. He has very close ties with suppliers and is not popular with the directors.

Ibu Masato as Dangozaka Noboru
The head of the surgery department of the National Higher Medical Care Centre’s west wing. A member of the Saikyo University faction. A highly strung, shrewd man who has risen through internal politics with his glib tongue. Like Ebina Takashi, he is is the typical sort who is firm with subordinates and weak against superiors.

Takahata Atsuko as Shiraki Junko
The head nurse of the National Higher Medical Care Centre. Dedicated to the work of a nurse, she has pride in her work and is harsh on herself as well as other people. She manages the nursing department which goes by the nickname “inner palace”. She is also respected and feared by the president of the centre.

Kishibe Ittoku as Kanbara Akira
The director of Good Doctors Agency, which manages freelance doctors like Daimon Michiko. He is excellent as an agent and secures one big remuneration contract after another. A man of many mysteries, he is rumoured to have once been a surgeon but stripped of his license to practice medicine. He is also familiar with the state of affairs of a university hospital. His interest is mahjong.

Kitaoji Kinya as Tendo Yoshihito
A director of the National Higher Medical Care Centre. He is critical of the east-west power struggle which is rampant in the centre. He has been working hard for the development Japan’s medical care. However, his true feelings and ambitions are shrouded in mystery. He shows a great interest in Daimon Michiko.