Posted on September 6, 2014 by jadefrost 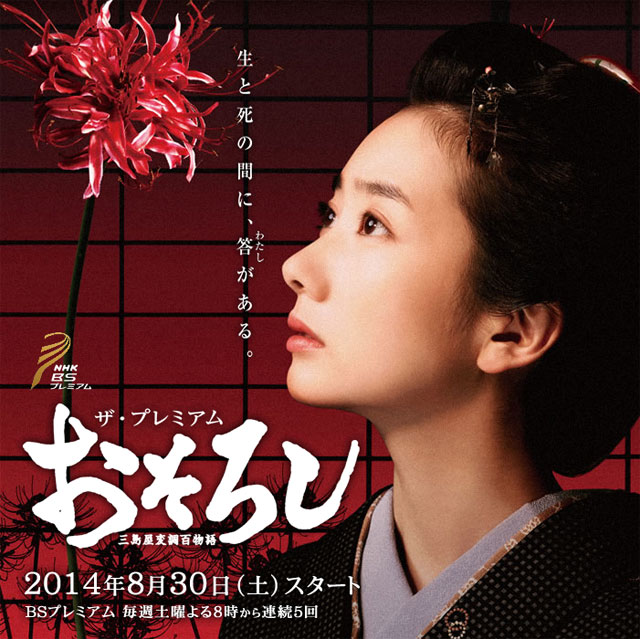 Story
During the Edo period, 17-year-old Ochika built an emotional wall against others after a murder occurred in her family which runs an inn the post town of Kawasaki. Her fiance was killed by a man who was raised as if he were her own sibling. Ochika has now left her hometown and taken refuge at the bag shop Mishimaya which her uncle, Ihei, opened in Edo’s Kanda Mishima-cho. She starts to live as a servant under the guidance of the female head servant Oshima and works silently every day. One day, Ihei summons Ochika to ‘Kokubyaku no Aida’ where he always welcomes Tobei of Matsudaya, his opponent in the game of go. He instructs her to listen to the 100 odd horror tales from the people who come to visit, and then leaves. Ochika slowly begins to open her heart to their curious tales … …

Characters
Haru as Ochika
The daughter of a family which runs the inn Marusen in the post town of Kawasaki. A tragic murder that occurred in her family has caused her to close her heart off from other people. She finds shelter with her uncle Ihei in Edo, and at his suggestion, becomes a listener of unusual ghost stories.

Toyohara Kosuke as Tobei
The first guest of the ghost stories. He visits Mishimaya as Ihei’s go opponent, but unexpectedly talks to Ochika about the very strange and frightening tale story that happened to him concerning the red spider lily.

Miyazaki Yoshiko as Oshima
Mishimaya’s female head servant. She has a cheerful, refreshing personality. Although she does not pry about Ochika, she hears Ochika’s own account of the truth in an unexpected turn of events.

Mitsushima Shinnosuke as Matsutaro
His life was saved by Ochika’s father and he was raise like her sibling. However, he became a party in the tragedy because of his wretched fate.

Kojima Hijiri as Otaka
She visits as a guest of the ghost stories, and starts with the tale of a haunted mansion, but acts weird with each passing moment. A dreadful secret is hidden behind this.

Murakami Jun as Mysterious Man
An elusive presence, he comes and goes between life and death. He usually is the image of the head clerk of a large store. Although he is called the man who crossed the Acheron, his true identity is a mystery.

Sano Shiro as Ihei
Ochika’s uncle. The owner of Mishimaya. He gently watches over a traumatised Ochika. Because he loves crazy things, he comes up with the idea of collecting strange ghost stories from within Edo.

This blog contains information and musings on current and upcoming Japanese dramas but is not intended to be comprehensive.
View all posts by jadefrost →
This entry was posted in NHK, Summer 2014 Dramas and tagged Haru, Osoroshi, Sano Shiro, Toyohara Kosuke. Bookmark the permalink.