Posted on September 4, 2014 by jadefrost 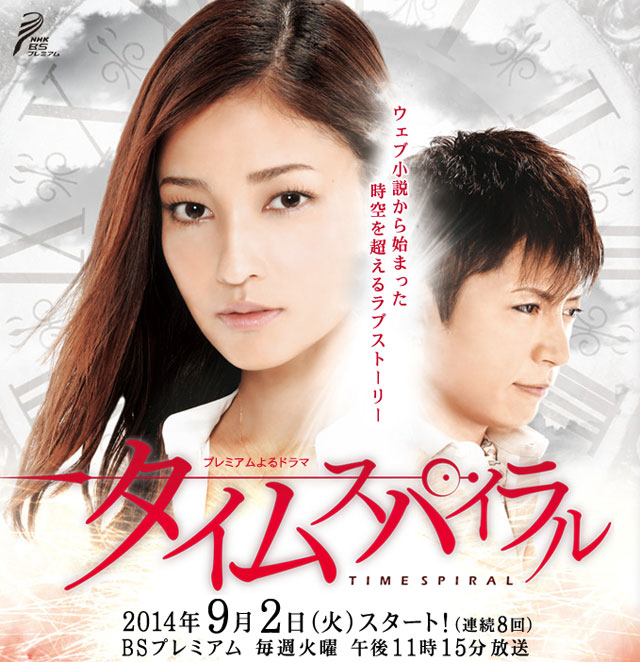 Story
Assistant professor Aizawa Natsuki has been traumatised by an abduction when she was young but her daily life is serene. She grew up with the support of her childhood friend Yuki Kentaro and now does physics research at Kosei University. One day, she meets a newly-appointed professor, Tatsumi Shuya, at the university just as Kentaro is thinking of proposing to her. From then on, strange things keep happening around Natsuki. Tatsumi has a grasp of what she likes and invites her to meals. And it is no wonder. He is in fact a time traveller who comes and goes between the future and the past. Tatsumi attempts to hamper Natsuki and Kentaro’s friendship, and to entice Natsuki romantically. Natsuki is gradually at his mercy. Before long, the heartrending “predestined relationship” between Natsuki and Tatsumi, which crosses space and time, is revealed.

Characters
Kuroki Meisa as Aizawa Natsuki
An assistant professor at Kosei University’s faculty of science and engineering. She lives with her mother who is a professor in the faculty of pharmaceutical studies in the same university. 15 years ago, she was mistaken for her childhood friend Yuki Kentaro and abducted. She has suffered from periodic panic attacks since then, but she does not tell her mother about it.

Gackt as Tatsumi Shuya
A newly appointed professor at Kosei University’s faculty of architecture. He attempts entice Natsuki romantically and to hamper Natsuki and Kentaro’s friendship. He is a person of many mysteries. In truth, he is a time traveller who has come from 2020 in order to achieve some goal.

Hiraoka Yuta as Yuki Kentaro
Aizawa Natsuki’s childhood friend and boyfriend. A houseman at Kosei University Hospital. He feels responsible for her abduction because she was mistaken for him. He has been thinking of proposing to her when he becomes a houseman, but has difficulty broaching it.

Kishimoto Kayoko as Aizawa Yoshimi
Aizawa Natsuki’s mother and a professor at Kosei University’s faculty of pharmaceutical studies. She successfully developed a cure for a noise ailment since her daughter’s kidnapping 15 years ago. In spite of this, she still keeps research earnestly for some reason.

Taketomi Seika as Mitsuda Mami
A famous violinist. When she was 8, she developed an incurable noise ailment and was admitted to Yuki General Hospital. She has been attracted to Yuki Kentaro. She recovered as a result of the cure developed by Aizawa Yoshimi.

This blog contains information and musings on current and upcoming Japanese dramas but is not intended to be comprehensive.
View all posts by jadefrost →
This entry was posted in Fall 2014 Dramas, NHK. Bookmark the permalink.