Posted on September 1, 2014 by jadefrost 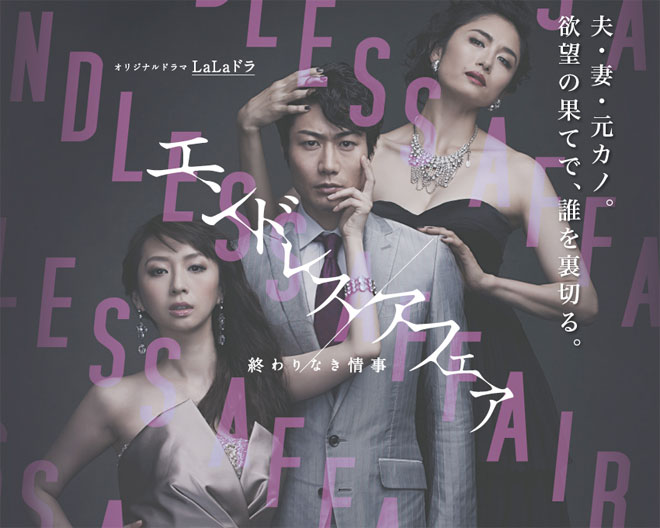 Story
Tachibana Kosuke is a section manager at the Media . Lifestyle Department of Miyamasa Corporation, a leading trading company. As a candidate to be the next department manager, he desires to secure a big 2020 metropolis project no matter what it takes. His wish comes true and he is appointed to be the project leader, but a rival who joined the company at the same time as he did emerges … … Grasping at straws, Tachibana learns through a social media site that he had registered with, that Yoshikawa Marie, his ex-girlfriend in university, has connections with the key persons involved in the project, and ventures to contact her. After that, he gets an invitation from Marie and the two of them meet again after some 20 years. They reminisce about their university days. Time and distance shrink. Before long, the two of them end up spending the night together. Although Tachibana feels guilty for cheating on his sexless wife Naoko, he gets in touch with the project’s key person through Marie. However, he is gradually pushed into a corner in both his home and work life because of his relationship with

Characters
Totsugi Shigeyuki as Tachibana Kosuke
A competent section manager who constantly secures work due to his ability to take action and research. He shows strong leadership, enjoys the confidence of his subordinates as well as his bosses. In university, he was the athletic sort who was the star player of the rugby team. Because he is a workaholic who works late or all night, he leaves household affairs to his wife, Naoko. “We don’t need man and woman in a family” and has neglected his wife for a long time. Nevertheless, he loves his family, but when he meets his ex-girlfriend Yoshikawa Marie again through social media, his home and work life start to derail.

Kojima Hijiri as Yoshikawa Marie
A sought-after freelance translator and interpreter who has undertaken a large government project. A beauty who has been everyone’s idol since university days. She and Tachibana Kosuke dated, but they broke up when she went to study in the US. She has no interest in marriage. When she meets Kosuke again after some 20 years, she aggressively gets close to him because “a married person is no trouble”.

Sakai Wakana as Tachibana Naoko
She married Tachibana Kosuke eight years ago, gave birth to a daughter Tomoka and has been looking after the family as a full-time housewife. She is unhappy that there is no sex with her husband, but cannot bring herself to talk about it and gently supports him.

Hasegawa Tomoharu as Hayama Koki
Tachibana Kosuke’s rival since university days. He joined Miyamasa Corporation in the same year. He competes with the construction development team which is led by Tachibana in the ‘2020 Project”, an urban development competition for Tokyo’s A zone aimed at Tokyo’s bid for the 2020 Olympics. He is also likes Yoshikawa Marie and attempts to outwit Tachibana personally and professionally.

Watanabe Ikkei as Higashino Hisamu
The chairman of the 2020 Project Committee. He made Yoshikawa Marie’s acquaintance through work and even though he is married, he has designs on Marie and persistently presses her.

Mickey Curtis as Saruwatari
A friend who has known the governor of Tokyo since high school and a key person in the ‘2020 Project’. He has nothing but faith in Yoshikawa Marie.

This blog contains information and musings on current and upcoming Japanese dramas but is not intended to be comprehensive.
View all posts by jadefrost →
This entry was posted in Lala TV, Summer 2014 Drama Specials and tagged Endless Affairs, Totsugi Shigeyuki. Bookmark the permalink.