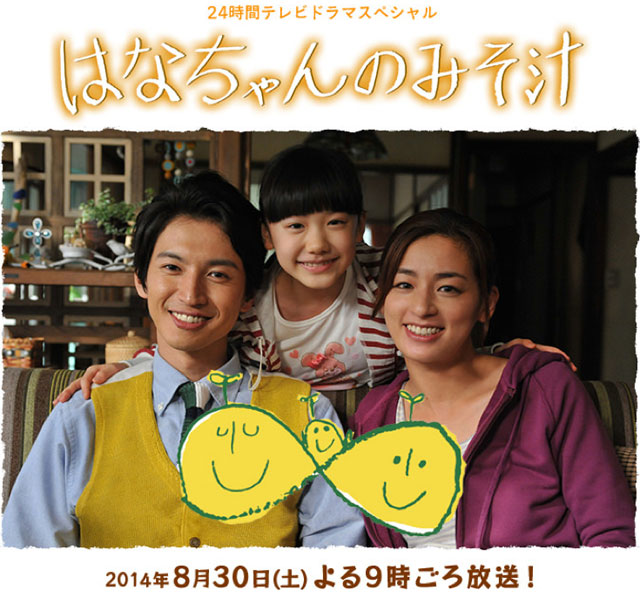 Date: From 9.00 p.m., 30 August 2014
Cast: Ono Machiko, Ashida Mana, Okura Tadayoshi, Tanaka Yuko, Kataoka Tsurutaro, Mano Kyoko, Osugi Ren, Kitami Toshiyuki, Otani Naoko
Synopsis: Yasutake Shingo (Okura Tadayoshi) is a newspaper reporter whose only redeeming feature is his earnestness. He meets Matsunaga Chie (Ono Machiko), who attends a music college, and they start dating. Each day becomes all the more bright and enjoyable for Shingo because of the lively Chie who loves to laugh, sing and eat. After one and a half years, Chie is employed as a music teacher. One day, Shingo is informed that Chie has breast cancer. After thinking about it, he decides to share a lifetime with her and proposes. His proposal gives her the courage to undergo surgery which she had been mulling over. Chie’s left breast is removed and the tumour taken out. However, her cancer is high-grade and there is a chance of a relapse. According to the doctor, if there are no signs of a relapse five years after anti-cancer drug treatment, she is fully cured. Chie receives an eight month-long course of treatment and weathers the painful side effects. After that, Shingo and Chie get married and start life together. Then she conceives. Shingo is overjoyed, but Chie has mixed feelings. A woman’s hormones will increase following childbirth and the risk of a recurrence of cancer is high. Chie decides to deliver the baby. A girl is born and given the name, Hana. Hana’s existence brings about a big change in Shingo and Chie. Chie regains her cheerfulness and would play the piano and sing like she used to. When Hana is nine months, Chie’s cancer is found to have spread to her lungs. Chie undergoes anti-cancer drug treatment again. She suffers side effects and also becomes mentally unstable. Shingo tries to support her, but the harsh reality starts to exhaust him. Hearing a woman’s story about overcoming cancer by taking food that is good for the body, Shingo and Chie begin a diet based on this advice. She altars her meals, sleeps regularly and endeavours to be bright and positive. Her physical condition noticeably improves. One day, Chie starts to teach 5-year-old Hana the “important things in life” such as laundry, cleaning and cooking. She thinks that even if she is no longer around, her daughter and husband will be able to live. Four years have passed since Chie’s cancer cells vanished. Hana is now 8 years old. Chie feels a change in her body. The doctor’s diagnosis is that the cancer has spread to her entire body … …
Official Website: www.ntv.co.jp/24h/drama2014

This blog contains information and musings on current and upcoming Japanese dramas but is not intended to be comprehensive.
View all posts by jadefrost →
This entry was posted in NTV, Summer 2014 Drama Specials and tagged Ashida Mana, Hana-chan no Misoshiru, Ono Machiko. Bookmark the permalink.