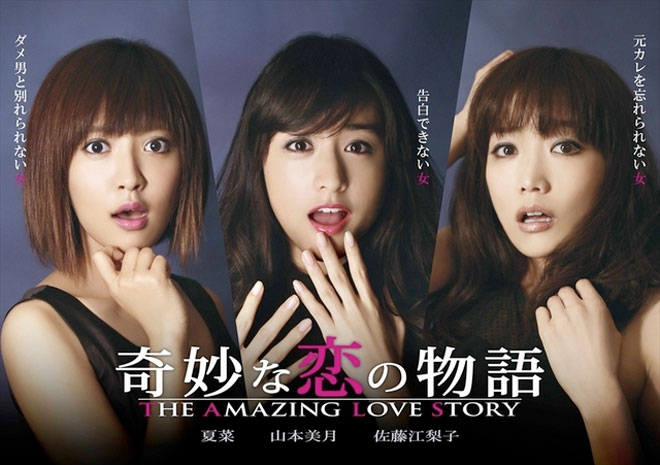 Enkiri Jinja
Date: From 3 July 2014
Scriptwriters: Takayama Naoya (Again!!, Tokumei Tantei Series, Doubles ~ Futari no Keiji), Hanzawa Ritsuko (Konya wa Kokoro dake Daite, Hanazakari no Kimitachi e, Otomen)
Cast: Natsuna, Totani Kimito, Watanabe Shu, Katsura Yume
Story: Yoko (Natsuna) is always attracted to hopeless men. Shinichiro (Totani Kimito), the boyfriend she is dating now, is a violent guy who gets out of hand when he snaps. But their relationship keeps dragging on. One day, Yoko who has decided to break up with Shinichiro, searches the internet for a separation method. What she comes upon is a strange shrine called “Separation Shrine”. Yoko visits the shrine half in doubt and is told, “A person who drinks this will fall into a deep slumber. When he next wakes up, he will fall in love with the first person he sees”. She gets hold of this “miracle water” and tries to use its effects to break up with Shinichiro. However, the person he sees after he has drunk the water is … …
Watch: Enkiri Jinja Episode 1

Koisuru ESP-er
Date: From 31 July 2014
Scriptwriters: Takayama Naoya (Again!!, Tokumei Tantei Series, Doubles ~ Futari no Keiji), Hanzawa Ritsuko (Konya wa Kokoro dake Daite, Hanazakari no Kimitachi e, Otomen)
Cast: Yamamoto Mizuki, Kaku Kento, Shiraishi Shunya, Kobayashi Ryoko
Story: Nana (Yamamoto Mizuki), Yasuyuki (Kaku Kento), Ken (Shiraishi Shunya) and Machiko (Kobayashi Ryoko) have gathered for a drinking session. All four of them are ESP-ers who secretly possesses special abilities. Each one has suffered a love trauma at an early age because of these special abilities and cannot express his or her own feelings. It is the same for Nana who is shy by nature. She has always liked her senior Yasuyuki, but cannot confess her feelings. Meanwhile, Nana learns that Yasuyuki is going to study overseas and attempts to use the telepathic ability, which she had resolved to keep under wraps, to convey her feelings. However, Ken who is in love with Nana and Machiko who has feelings for Yasuyuki, use their special abilities and the situation takes an unexpected turn … …
Watch: Koisuru ESP-er Episode 1

Mirai Hanabi
Date: From 28 August 2014
Scriptwriters: Takayama Naoya (Again!!, Tokumei Tantei Series, Doubles ~ Futari no Keiji), Hanzawa Ritsuko (Konya wa Kokoro dake Daite, Hanazakari no Kimitachi e, Otomen)
Cast: Sato Eriko, Kikawada Masaya, Kiriyama Ren, Ikeuchi Mansaku
Story: 33-year-old Yuki (Sato Eriko) is an office lady who is completely hopeless in both work as well as love. She meets two men she had once dated at a boyfriend’s wedding. One of them is 35-year-old Keisuke (Kikawada Masaya), a senior at her company who is good at his job and a kind prince charming. The other is 28-year-old Naoki (Kiriyama Ren), a self-professed cameraman who has no money but continues to pursue his dreams and live life his own way. Yuki is pressed by the two men to reconcile, but rejects them. On the way home from the wedding, she encounters a suspicious-looking man (Ikeuchi Mansaku) holding “mystical fireworks” which “can see the future”. Yuki is shown an appalling future where she becomes homeless and dies alone. Using the power of the “mystical fireworks” given by the man, she goes back to the past and attempts to change her own future, but … …
Watch: Mirai Hanabi Episode 1

This blog contains information and musings on current and upcoming Japanese dramas but is not intended to be comprehensive.
View all posts by jadefrost →
This entry was posted in Summer 2014 Dramas, UULA. Bookmark the permalink.