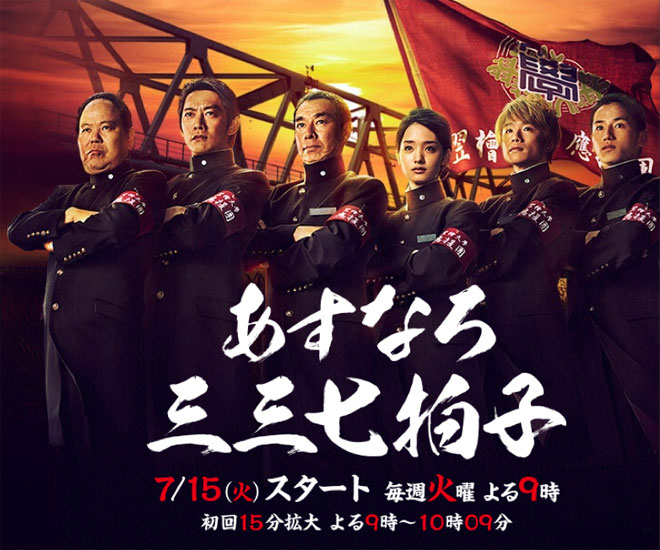 Story
Fujimaki Daisuke is a middle-aged salaryman who works for the general affairs department of AeLL Co, a trading company. He learns that Hosaka Sho, the boyfriend of his daughter Miki is coming to visit and prepares a barbecue at home. His wife Hiroko says he should have ordered food delivery, but he insists on a barbecue in order to see Sho’s personality. Right after that, it starts to rain and Sho arrives. Fujimaki is taken aback to see his blonde hair and earrings. In the end, the barbecue is called off and they end up dining inside the house. However, Fujimaki gets angry with the frivolous Sho who does not even use polite speech. A party is being held for the alumni of the old Setagaya University of Commerce’s cheering squad at the banquet hall of a hotel. Arakawa Tsuyoshi, the secretary-general who is now the president of AeLL Co, laments the steady decline of the cheering squad since the merger with a women’s university and change in name to Asunaro University 10 years ago. Arakawa, Saito Yuichi and Yamashita Masato take the words of the oldest alumnus not to let the squad be scrapped to heart. Several days later, Fujimaki is summoned to the president’s office and asked by Arakawa to enroll at Asunaro University as a working adult and become the 58th leader of the cheering squad which has no members. Arakawa tells Fujimaki that he is a candidate to be laid off and forces him to accept by dangling the threat of discharge if he refuses. In March, the heads of the departments at Asunaro University gather and ask the feminist associate professor Hara Tomoko to be an adviser to the cheering squad. Their ulterior motive is to drive the squad to its demise by making Tomoko serve as an adviser. Tomoko deliberately accepts and speaks to Matsushita Saya, a third-year student. At the same moment, Fujimaki comes to the room for the cheering squad and meets Hazuki Rena and Sonoda Yoshihiko, the heads of the cheerleading club and wind instruments club. Sonoda declares that his club will not participate in support activities from this year and leaves. Rena helps Fujimaki to clean the room which is covered in dust as she tells him about the stage to welcome new students at the enrollment ceremony. Then Saito and Yamashita arrive. The two of them take Fujimaki out to give him lessons, but Saya watches them from afar … … As Fujimaki gets antiquated customs “Always have your school uniform on”, “Reply ‘Ossu’”, “A senior’s word is the law” drilled into him by old boy Saito, he becomes hooked on the depth of the philosophy of supporting people in a visceral way.

Goriki Ayame as Matsushita Saya
A third-year student at Asunaro University. She is frustrated with feminist advocates and the old-fashioned male-dominated society, but joins the cheering squad as a female member in an unexpected turn of events.

Kazama Shunsuke as Hosaka Sho
A second-year student at Asunaro University. The boyfriend of Fujimaki Daisuke’s daughter, Miki. With blonde hair and earrings, his style is that of the youth of today. He is ordered by Fujimaki to become a member of the cheering squad in exchange for his permission to date Miki, and joins the squad.

Takahata Mitsuki as Hazuki Rena
A fourth-year student at Asunaro University and the head of the cheerleading club. She has a cheerful, friendly personality. She joins the cheering squad, and busies herself with Fujimaki Daisuke’s business, to his bewilderment.

Kikuchi Momoko as Fujimaki Hiroko
Fujimaki Daisuke’s wife and mother of Miki. She is a little out of touch with the world. Her husband’s sudden enrollment in university and transformation into the head of the cheering squad shocks her, but she gradually begins to support him.

Nishida Toshiyuki as Arakawa Tsuyoshi
An alumnus of Setagaya University of Commerce’s cheering squad and president of AeLL Co. The person who makes Fujimaki Daisuke go to university. He is deeply attached to the cheering squad. He exudes an outstanding presence both in the squad and in the company.

This blog contains information and musings on current and upcoming Japanese dramas but is not intended to be comprehensive.
View all posts by jadefrost →
This entry was posted in Fuji TV, Summer 2014 Dramas and tagged Asunaro San San Nana Byoushi, Kazama Shunsuke, Sorimachi Takashi, Takahata Mitsuki, Yanagiba Toshiro. Bookmark the permalink.