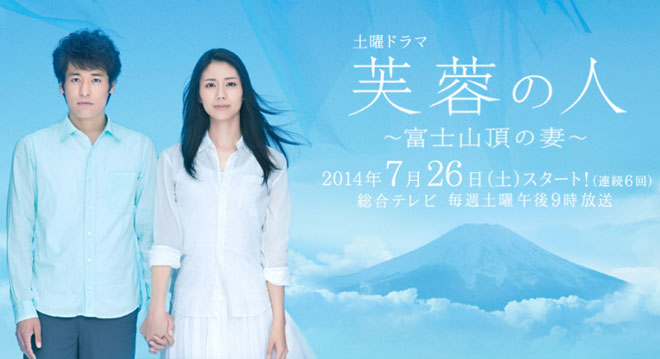 Story
In 1895 (Meiji 28), Nonaka Chiyoko prays for the safety of her husband Itaru who is attempting to climb Mt Fuji in midwinter. If he accomplishes what no one has done before, he would finally build an observatory on the mountain’s summit with the intention of staying there alone in the winter. He will be able to observe the weather in order to advance meteorological studies even though it may be at the cost of his own life. Burning with a conviction that the country cannot be changed if no commoner demonstrates it first, Itaru has the support of his parents and younger brother but Chiyoko is absolutely anxious. She is convinced that her husband will certainly die of such recklessness if she lets him go alone, and decides to climb Mt Fuji together with him. However, this is vehemently opposed by her mother-in-law Tomiko who berates her that her place is at home, and Chiyoko apparently reconsiders. In order to join Itaru, she hides this plan from the people around her, deceives Tomiko and does everything possible to finally carry it out. On the summit of Mt Fuji in midwinter – a feat no one has yet achieved, husband and wife battle the cold and altitude sickness as they begin their observations … …

Characters
Matsushita Nao as Nonaka Chiyoko
A virtuous housewife and mother of a 2-year-old daughter, Sonoko. She married Nonaka Itaru of Tokyo. The only daughter of the Umezus who were once masters of Noh plays and songs in the Kuroda domain (present day Fukuoka Prefecture). Itaru is her cousin (son of her mother’s sister), childhood friend, and first love. Besides raising her husband’s younger sister Kotoko who is the same age as her daughter, she also does the housework. She faces the challenge of observing on Mt Fuji in midwinter together with Itaru.

Sato Ryuta as Nonaka Itaru
Nonaka Chiyoko’s husband. A meteorologist who succeeded in being the first to climb Mt Fuji in midwinter. Born in 1868 (Keio 3), his youth coincided with the Meiji Restoration. He aspires to observe the weather on the summit of Mt Fuji in midwinter for the sake of national development as well as the development of the country’s meteorological studies, and is even prepared to die because of his sense of mission.

Hirata Mitsuru as Nonaka Katsuyoshi
Nonaka Itaru’s father. A magistrate. The Nonakas come from a long line of samurais that served the Kuroda domain.

Yo Kimiko as Nonaka Tomiko
Nonaka Katsuyoshi’s wife and mother of Itaru, Kiyoshi and 2-year-old Kotoko. She is vehemently opposed to the plan of her niece, Chiyoko, to head to Mt Fuji with her son. Although she is strict with Chiyoko as her mother-in-law, she is actually concerned about her welfare.

Miura Takahiro as Nonaka Kiyoshi
Nonaka Itaru’s younger brother. A student of Teikoku University. He is a compassionate sympathiser of his brother and sister-in-law. He approves of Itaru’s scheme and participates in the plan to observe the weather on the summit of Mt Fuji.

This blog contains information and musings on current and upcoming Japanese dramas but is not intended to be comprehensive.
View all posts by jadefrost →
This entry was posted in NHK, Summer 2014 Dramas and tagged Fuyou no Hito, Hirata Mitsuru, Matsushita Nao, Yo Kimiko. Bookmark the permalink.