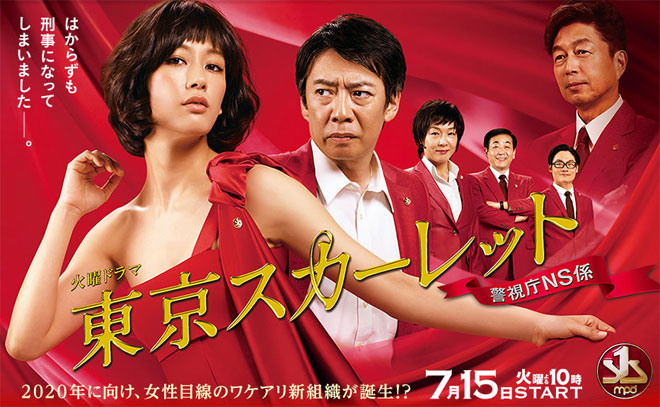 Story
In response to an article in a foreign magazine, Tokyo governor Shibahama Kantaro announces the establishment of a new section in the Tokyo Metropolitan Police Department with a female as the manager. This responsibility gets delegated within the organisation and everything is eventually left to Iwai Tomi, the head of the First Investigative Division. Taking the first letters of the words “New Service”, Iwai sets up the NS Section within the division. Mid-career female detective Demachi Izumi, who is investigating a murder which occurred in the neighbourhood of ultra-exclusive apartment buildings in the bay area, is appointed the head of the section. Izumi recruits personnel but fails to get a positive response no matter whom she speaks to. In the end, she starts the NS Section with her brother-in-law Hori Tokumi and the Forensics Division’s Arakita Mitsuru who has been treated as a burden for taking paternity leave during extremely busy periods. At that moment, detective Narutaki Anne of the Azabu Nishi Police Precinct visits Izumi. Anne has come to the section to take care of trivial tasks, but the detective Ato Sousuke shows up and they start to discuss the case. The situation develops rapidly. By some coincidence, her boyfriend Kobayashi Toru lives at the ultra-exclusive apartment building where the murder occurred. Anne ends up helping in the investigation little by little. The apartment building where the murder took place is a type called “gated apartments” which have enhanced security through the various security devices encircling the perimeter. Naturally only the very rich live here. But according to the concierge, no man by the name of Kobayashi Toru lives here. By questioning the assembled residents, they learn that Toyama, the president of an apparel company had invited Yuriko, the woman who was murdered, and had offered to show her around the apartment building several times. The assailant could be someone who hates the rich living in this building. Ato ventures to tell this to the residents and induces a sense of impending danger. Then Anne thinks she maybe on to someone. The person she is talking about is the writer of a blog which she often reads. The results of an analysis of the contents reveal that the writer is Toyama’s wife, Kaori. Anne and Izumi strike at Kaori but she has an alibi. Toyama himself also has an alibi and the investigation goes nowhere.

Characters
Mizusawa Asami as Narutaki Anne
A detective of the First Investigative Division’s NS Section. She used to be a detective with a police precinct, but her hidden “detective ability” was discovered by Demachi Izumi and Ato Souske and she was recruited to join the NS Section. A female in her 30s who laments about the lack of a private life due to her irregular job. She is partnered with Ato to solve cases.

Namase Katsuhisa as Ato Sousuke
A detective of the First Investigative Division’s NS Section. He is an excellent investigator who has cracked many difficult cases, but is suspected of involvement in an internal scandal in the past. He would spend his days looking peevish. But this changes after he is assigned to the NS Section and partnered with Narutaki Anne, he starts to regain his lustre.

Sugawara Daikichi as Hori Tokumi
A detective of the NS Section. His wife is Demachi Izumi’s younger sister. He belonged to the Special Investigations Office which focuses on unsolved cases, but was scouted by his sister-in-law for his familiarity with past cases and transferred out of a sense of duty to her.

Kimura Midoriko as Demachi Izumi
She became the head of the NS Section through an unexpected turn of events. A female detective who puts together a ragtag group. She grew up in a family of police officers and has the disposition of a big sister.

Nakamura Masatoshi as Iwai Tomi
The head of the First Investigative Division and creator of the NS Section. He publicly behaves as if it was just started up, but there has actually been forethought. He knows the truth about the past which Ato Sousuke is saddled with.

This blog contains information and musings on current and upcoming Japanese dramas but is not intended to be comprehensive.
View all posts by jadefrost →
This entry was posted in Summer 2014 Dramas, TBS/MBS and tagged Mizukawa Asami, Namase Katsuhisa. Bookmark the permalink.