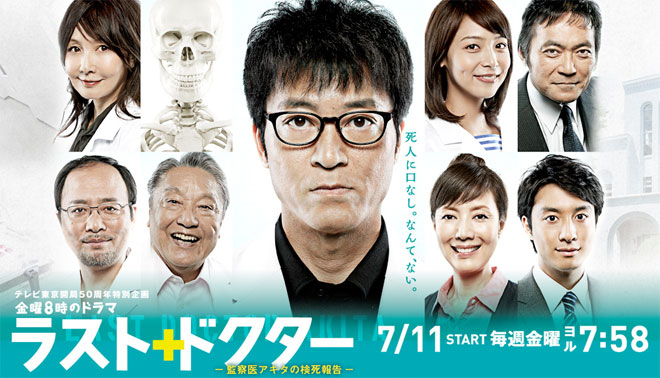 Story
Yoshizaki Kaoruko, who had been a clinician at a university hospital, comes to take up a post at the Kanto Medical Examiner’s Office after she is told by her professor to try to get experience. However, everyone from the eccentric supervising doctor Akita Shinya, unpretentious director Yanagida Shuhei and experienced assistant Yamashita Mieko are all individualistic characters. Kaoruko has no idea what is going to happen. Kaoruko’s mentor is Akita who has a reputation of being “peculiar” even within the medical examiner’s office. “It’s easier to deal with the dead than with the living,” he says. She is at the mercy of his bizarre behaviour from the first day. One day, Akita and Kaoruko are put in charge of the dead body of popular model Suyama Rika, who fell to her death. The cause of death is multiple organ injury and her bag was left on the rooftop of the 5-storey building at the scene. Detective Yamakura and the other police officers consider it to be a suicide because there are no signs of a struggle and an email was sent to her manager bidding “farewell”. However, Akita is drawn to a subtle point on the dead body and goes to the building which Rika fell off. On the other hand, detective Ikeda who has been investigating another murder, discovers that at the estimated time of death, Rika was captured on security cameras far from the place where she fell … …

Characters
Terawaki Yasufumi as Akita Shinya
A medical examiner who works at the Kanto Medical Examiner’s Office. He is more interested in facing the dead than saving people’s lives. He does not speak his mind and quietly devotes himself to his work. Although he is treated like an eccentric by the people around him, his performance is highly regarded. His private life is shrouded in mystery and it is not clear if he is married or single.

Aibu Saki as Yoshizaki Kaoruko
A clinician who was working at a university hospital, but takes a post at the Medical Examiner’s Office at the suggestion of her professor. She gets supervised by Akita Shinya. She is initially agonises over Akita’s bizarre behaviour, but soon begins to understand Akita who faces the dead with sincerity.

YOU as Takeshita Ryoko
A member of the Inspection Division who checks specimens at the time of an autopsy. She is known for her dedication to her work. On the other hand, she is has a romantic predisposition in her private life.

Makita Sports as Yasuda Keisuke
A medical examiner who is conservative and places great value on rules. He does not think much of Akita Shinya who often acts selfishly. He has high career aspirations and is searching for an opportunity to go back to the university hospital he used to work at.

Toda Keiko as Yamashita Mieko
An assistant medical examiner. Even though she does not have a medical license, she has a wealth of knowledge and experience, and is indispensable to the medical examiners. She is used to Akita Shinya’s treatment and has built a relationship of trust along with the praise and scolding.

Ito Shiro as Yanagida Shuhei
The director of the Kanto Medical Examiner’s Office. His daily routine is to make his rounds of the office in his sandals. He is good humoured and solves the problems of the medical examiners in fits and starts.

This blog contains information and musings on current and upcoming Japanese dramas but is not intended to be comprehensive.
View all posts by jadefrost →
This entry was posted in Summer 2014 Dramas, TV Tokyo and tagged Aibu Saki, Ito Shiro, Last Doctor, Ozaki Masaya, Terawaki Yasufumi, Toda Keiko. Bookmark the permalink.