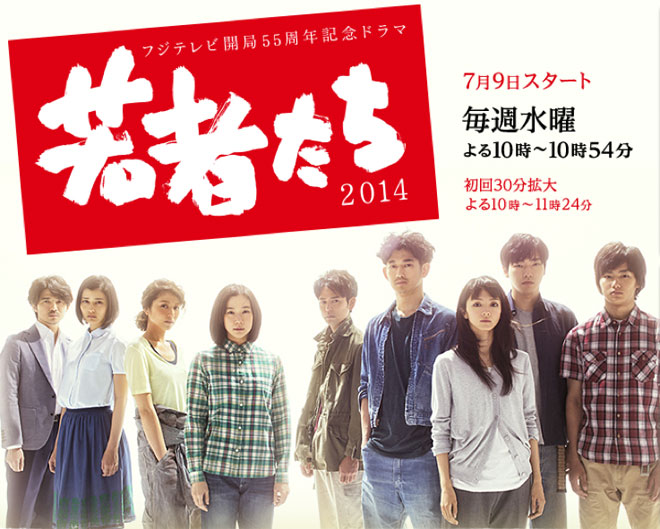 Story
Sato Asahi, Hikari, Haru, Tadashi live in a house in Tokyo’s old working class neighbourhood. Besides the four siblings, there is also a second brother, Satoru. But he left home due to some circumstances. Because their parents died young, the eldest brother Asahi brought up his siblings as the surrogate parent. The old-fashioned and headstrong Asahi keeps saying that he is the one who raised them, but this is annoying to his younger siblings. He works at a construction site and buys lunch from a deli where the cute Sawabe Azusa serves as a draw for the shop. The eldest sister Hikari is a nurse at a university hospital’s neonatal intensive care unit (NICU) where her patients include premature babies and infants with disabilities. The doctor Shinjo Masaomi who used to live near the Satos also works there. Haru is dedicated to theatre more than studies at university. He leads a theatre company as its leader, but grows irritable at the difference in the levels of enthusiasm between himself and the troupe’s members. Youngest brother Tadashi dropped out of high school for some reason, and spends his days attending cram school in order to obtain high school equivalence qualifications. The beautiful, enigmatic Nagahara Kasumi also goes to the same school. On the other hand, Yashiro Takako speaks to Satoru who has come out from some place and suddenly utters, “I bet you killed your mother?” The five Sato siblings each have their own issues and problems, and an unexpected incident soon happens to the family … …

Characters
Tsumabuki Satoshi as Sato Asahi
The eldest son of the Sato family. He dropped out of high school in order to bring up his younger siblings in place of their parents who died young. He went to work for the road paving company where his father was employed. For close to 15 years, he has tolerated being treated with less than respect by new university graduates and continued working. Because he was forced to live in poverty, he is careful and strict about money. He is often overly meddlesome due to his love for his siblings. To put it nicely, he is a “passionate guy”, but the type who would use his mouth and fists before his mind. He has an old-fashioned way of thinking and his favourite phrase is, “It isn’t logical!” He is a big pro wrestling fan.

Eita as Sato Satoru
The second son of the Sato family. After graduating from junior high school, he got a job at the road paving company where his father worked, like his older brother Asahi. However, when he was 18, he suddenly quit. He and Asahi quarreled and he even left home. Because he has faced the harshness of the world at a young age, he believes “people deceive in order to survive”. He is the sort who will not show his own distress and worries to others. As a result, he is often misunderstood. But in his heart, he loves his siblings in a different way from Asahi.

Mitsushima Hikari as Sato Hikari
The eldest daughter of the Sato family. A nurse who works at a Tokyo university hospital’s neonatal intensive care unit (NICU). While the family’s financial situation was difficult, she had her brother Asahi’s support and enrolled in nursing school. She became a nurse after studying hard. There are patients with disabilities at the NICU which is intended for premature babies, but she is well thought of by both the doctors and patients because of her stout-heart, willingness to help and sensibility. She is about the right age to get married and Asahi encourages matchmaking, but she has completely no interest in that.

Emoto Tasuku as Sato Haru
The third son of the Sato family. A fifth-year student who attends a national university in Tokyo. He is repeating a year in school. After he turned down the company which he had an unofficial job offer with, he formed a theatre company when he stayed back. He pours his passion into theatre rather than studies and finding a job. There is a reason why he rejected the unofficial job offer, but Asahi cannot be reasoned with and still reproaches him about it to this day. While he is the romantic, idealistic type, he also has a great deal of curiosity and would not hesitate to poke his nose into the romances of his siblings including eldest brother Asahi.

Nomura Shuhei as Sato Tadashi
The fourth son of the Sato family. Because he dropped out of high school for certain reasons, he is now attending a cram school with the aim of passing his high school equivalence exam. It is his eldest brother’s dream that he go to a national university after getting his qualifications. Their mother passed away at the same time that he was born, and their father when he was 5. Because of that, Asahi is like a parent to him. He broods over things due to his slightly introverted and genial personality.

Aoi Yu as Sawabe Azusa
A part-timer who works at the deli where Sato Asahi buys lunchboxes. Although she is the cute, smiling face behind the counter, there is in fact, some situation at home. Her interest is watching pro wrestling matches.

Nagasawa Masami as Yashiro Takako
A mysterious female who suddenly shows up in front of Sato Satoru and declares, “You killed your own mother, didn’t you?” She has for some reason cast away her envy for Tokyo and returned to her parents’ home where she is doing farming.

Hashimoto Ai as Nagahara Kasumi
A third-year high school student who attends the same cram school as Sato Tadashi. She is the class idol because of her attractive looks and excellence in both studies and sports. However, she is actually playing the role of a pure and innocent character to match her surroundings. In her heart, she is pessimistic and views everything as worthless even her parents, friends and boyfriend.

Yoshioka Hidetada as Shinjo Masaomi
A doctor at the university hospital’s neonatal intensive care unit (NICU) where Sato Hikari works at. He also used to live next door to the Satos and is acquainted with the siblings. He is married but lives apart from his wife and child. Although he is dedicated to his work, he is believed to be no-nonsense because he does not say a lot and is cool. However, he has feelings and consideration for the other party.

This blog contains information and musings on current and upcoming Japanese dramas but is not intended to be comprehensive.
View all posts by jadefrost →
This entry was posted in Fuji TV, Summer 2014 Dramas and tagged Aoi Yu, Eita, Hashimoto Ai, Mitsushima Hikari, Tsumabuki Satoshi, Wakamonotachi 2014. Bookmark the permalink.