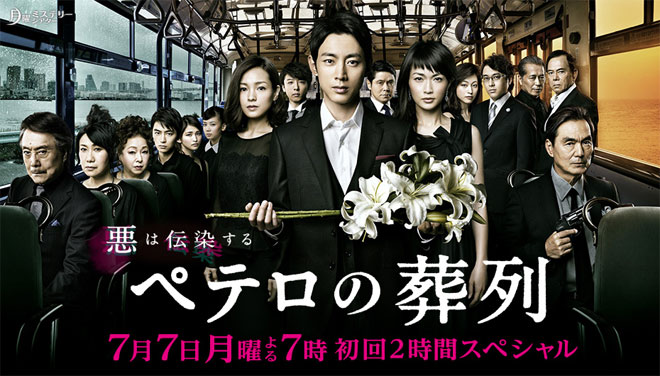 Story
Sugimura Saburo, a salaryman who works for the public relations office of Imada Group, is the deputy editor in charge of the in-house newsletter ‘Aozora’. His bonds with the editorial staff of the newsletter including his boss Sonoda Eiko, colleagues Tejima Yuichiro and Shiina Haruka as well as the owner Mizuta Taizo of the ground floor cafe ‘Suiren’ have been strengthened through the various incidents that have happened two years ago. Editorial staff numbers have also increased with part-timer Nomoto and Ide Masao, an employee seconded from head office. One day, Sugimura, Sonoda and Tejima are on their way back from an interview with Mori Nobuhiro, a former company director, when the bus they are riding in is hijacked by an old man with a gun. The sound of a gunshot rings out. Five other people including the driver are taken hostage along with Sugimura, Sonoda and Tejima. The three of them wait for an unguarded moment, but the old man’s baffling behaviour throws the situation off kilter. The old man is well prepared to handled everything from the collection of mobile phones to the destination of the bus and resistance of hostages. Sugimura and the rest have no chance to escape. Then the old man issues a surprising instruction, “Please call the police” and a mysterious offer to “pay compensation later” to all hostages. What exactly is his motive? Furthermore, a spate of murders and fraud cases occur one after another. Meanwhile, Nahoko is with the esthetician Mano Kyoko. Her troubles will later develop into a problem and a big incident which even gets Sugimura involved … …

Characters
Koizumi Kotaro as Sugimura Saburo
An ordinary salaryman who is an editorial staff in Imada Group’s public relations office. The father of his wife Nahoko is Imada Yoshichika, the chairman of Imada Group and a heavyweight in political and business circles. He is often called “Mr Nice Guy” by the people around him. Despite marrying into the family, he does not have ambition. He has a deep love for his family and nothing matters to him more than his tranquil life with Nahoko and their daughter Momo.

Hasegawa Kyoko as Mano Kyoko
A skilled esthetician who works at an upscale beauty salon and has been in charge of Imada Nahoko. But this time, she tells Nahoko that she is quitting the salon due to family circumstances. A single mother who lives with her child.

Kuninaka Ryoko as Sugimura Nahoko
Born the child of the mistress of Imada Masachika, the chairman of Imada Group, her mother died when she was a high school student. After that, she was adopted by the Imadas and carefully nurtured. She is a sheltered lady and also somewhat street smart.

Nagatsuka Kyozo as Sato Ichiro
The criminal responsible for the bus hijack and the man pivotal to the story. He identifies himself as Sato Ichiro in front of his hostages and starts to cajole his victims with eloquence. What is his true identity?

Hira Mikijiro as Imada Yoshichika
Imada Nahoko’s father and the chairman of the Imada Group, one of Japan’s leading conglomerates. When Sugimura Saburo married his daughter, it was on condition that Sugimura work at the group’s public relations office. He is a great father-in-law to Sugimura, and can also be called his life’s teacher.

This blog contains information and musings on current and upcoming Japanese dramas but is not intended to be comprehensive.
View all posts by jadefrost →
This entry was posted in Summer 2014 Dramas, TBS/MBS and tagged Hasegawa Kyoko, Koizumi Kotaro, Kuninaka Ryoko, Miyabe Miyuki, Petero no Souretsu. Bookmark the permalink.