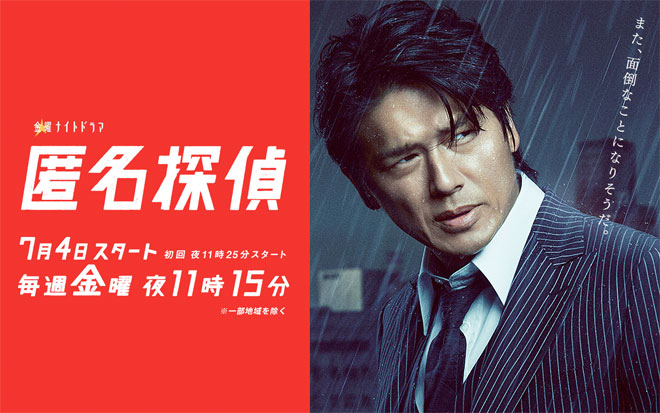 Story
The unnamed detective originally had a home office at a multi-tenant building with strip clubs in Asagaya. But he was saddled with a large debt because of the lawyer Saejima Kyoko, and got put on a Alaskan fishing boat. After that, he somehow made it back to Japan and has now rented a room at a multi-tenant building in a back alley of Ebisu. It is not long before he starts detective work again. At times, he is betrayed and gets covered in cuts and bruises, trampled on authority, but he never gives up and would go after the truth simply for the sake of his beautiful female clients. One day, Kyoko brings a job to him. The client is Muraki Misato, a charismatic business woman who built a large company in her lifetime. She wants to ascertain if Tanabe Yuki, a temporary employee working at her company, is the biological daughter she gave birth to in her teens and fostered out. Misato has felt guilty about putting her child up for fostering, and intends to give her vast wealth to Yuki if she is her biological daughter. The detective immediately starts to investigate, and is convinced that Misato and Yuki are mother and daughter. But he obtains disquieting information from someone and senses that there is more to this job. The plain looking Yuki has in fact been working in a bar in order to repay the debts of her boyfriend. In addition, as the detective proceeds with the investigation, a new mystery stands in his way … …

Characters
Takahashi Katsunori as Detective
A man whose identity and age is unknown. Although he says that he is an investigator, he is not an occupational investigator, but a troubleshooter who undertakes various jobs through a go-between for the sake of money. However, the requests he accepts are typically only from females. He hates being tied down more than anything, and leads a life free of mobile phones, emails and the internet. He loves bourbon and jazz with a passion, and is extremely weak and kind to females. Because of that, he frequently gets into unnecessary trouble. Is the lost of his name related to some past female relationship? … …

Katase Nana as Saejima Kyoko
A shrewd hotshot lawyer who is single. She introduces clients who have cases that the police and herself are powerless to handle, to the detective. She is informed about the underworld, and at times supports the detective. A sexy, stylish beauty. She is extremely businesslike about money, loves high-end clothes, wine and accessories. The only person who knows about the detective’s past, she would even say to him every now and then, “It’s better to forget”. However, she is unable to turn her back on the detective and ends up caring for him.

Tayama Ryosei as Anan Koichi
A veteran cop. He is always involved in the cases that the detective investigates and constantly makes sarcastic remarks. Their relationship appears to be a troubled one. He bought a small house in the same neighbourhood as the detective and lives with his wife and daughter. He seems to be having difficulty with the household budget because of his home loan and costthe of his daughter’s education. Each time he meets the detective he would persistently ask if it pays well to be a freelancer.

Shiba Toshio as Nagayama Itsuro
The owner of the hairdressing salon on the first floor of the detective’s office and the landlord of the building. He seems to have once been a detective nobody can beat, but has now washed his hands off it. He watches over the detective who ekes out a living through lonely detective work like he once used to. Although he never talks a lot, he would at times say significant words to the detective and also give him hints to solve cases and the way to face clients.

This blog contains information and musings on current and upcoming Japanese dramas but is not intended to be comprehensive.
View all posts by jadefrost →
This entry was posted in Summer 2014 Dramas, TV Asahi and tagged Takahashi Katsunori, Tokumei Tantei Series. Bookmark the permalink.