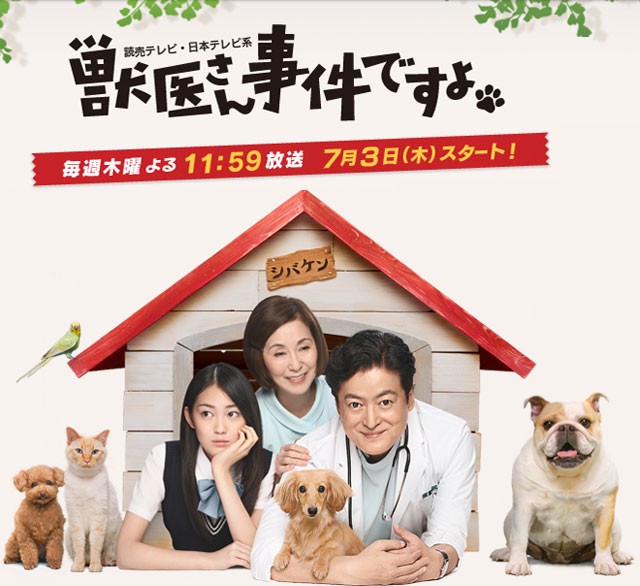 Story
Shiba Kentaro, who goes by the name of Shibaken, works as a vet in Tokyo’s old working-class neighbourhood. His belief is that “everyone is family if they live under the same room, even pets and those not related by blood”. As a vet, he naturally saves the lives of pets. But he also worries about the problems of the pet owners and their families as if these are his own personal matters, and strives to be of some help. Although he often goes a little too far and also seems ill at ease, his pure and frank thoughts saves and moves the hearts of various people. One day, Shibaken meets a woman called Asano Hitomi who has a golden retriever puppy, Peach, while making a house call. He suggests that she talk to him about anything if she is troubled. Hitomi complains that Peach has been out of sorts and also has not been eating since a week ago. Learning that she is a divorced, single mother, Shibaken is suddenly full of enthusiasm. Hitomi is bothered that her 10-year-old daughter Aoi has not spoken to her ever after her divorce. Shibaken cannot leave people in need alone, and due in part to his attraction to her, he tries his best to reconcile mother and daughter.

Characters
Jinnai Takanori as Shiba Kentaro
The second generation director of Shiba Animal Hospital. A bachelor. He is compassionate and wears his heart on his sleeve. He is strangely able to understand the feelings of animals and has reliable surgical skills. He worries about the problems of the pet owners who visit as if they were his own, and interferes. If the owner is female, he would often get too emotionally involved and lose his heart.

Yoshimoto Miyu as Shiba Hinako
A 17-year-old high school student whom Shiba Kentaro has been raising as his daughter. On her 15th birthday, he confessed that she is not his biological daughter and he had heard that her mother died of illness when she was 2 years old. Although she loves animals and would go in and out of the animal hospital, she has been avoiding it since her 15th birthday.

Nogiwa Yoko as Shiba Hanae
Shiba Kentaro’s mother, but they are not related by blood. She works at Shiba Animal Hospital as a nurse and also minds the money. Her husband died 27 years ago, and she trained Shiba to be a full-fledged vet. Because she has been through ups and downs in her life, she is philosophical about things. She would give pep talks when Shiba loses his head over a woman or is sloppy.

Makita Tetsuya as Tamaki Shinya
A handsome, sweet-tempered vet who comes to help when it is busy at Shiba Animal Hospital. He is smart and knowledgeable but does not put it into practice.

This blog contains information and musings on current and upcoming Japanese dramas but is not intended to be comprehensive.
View all posts by jadefrost →
This entry was posted in NTV, Summer 2014 Dramas and tagged Juui-san Jiken desu yo, Nogiwa Yoko. Bookmark the permalink.