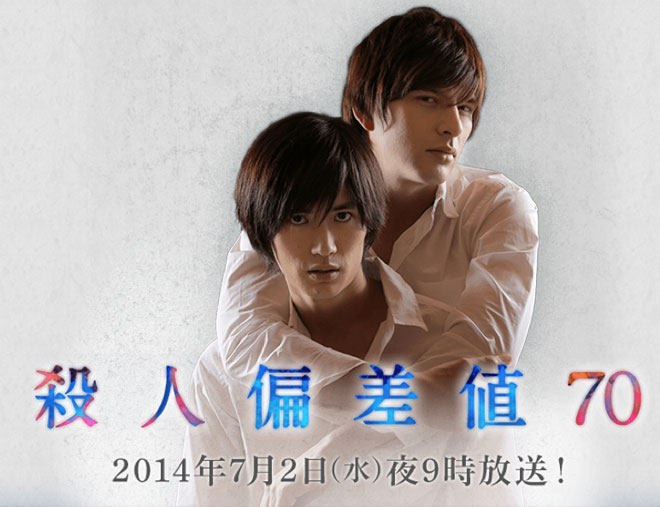 Date: From 9.00 p.m., 2 July 2014
Cast: Miura Haruma, Shirota Yu, Takimoto Miori, Kuriyama Chiaki, Kiriyama Ren, Takahashi Katsumi
Original Work: Juken Jigoku by Nishimura Kyotaro
Synopsis: Miyahara Keisuke (Miura Haruma) oversleeps on the day of the Tokyo University entrance exam. He wants very badly to take the exam and had been waiting for another chance for two years. But he crosses a line in order to delay the starting time. Pretending to be a bomber, Keisuke sends an email to the university to warn of a bomb. When he arrives at the exam venue, the exam candidates who have been let out from the classrooms are abuzz. Keisuke cannot help but have a smile of relief on his face. One guy watches his reaction … … The exam resumes after a delay of one hour. Keisuke keeps his turmoil under control and tackles the questions. He is already past the point of no return. In March, Keisuke qualifies for Tokyo University. He is happy and feels a sense of freedom. Mayama Rikako (Takimoto Miori), his girlfriend since high school days, shares in his delight. It was agonising for Keisuke to date Rikako, who has been enjoying university life, while waiting for another chance to enter a university. But he is finally her equal. Well, he may come out ahead … … Keisuke’s father who runs a small factory in the outskirts of Tokyo is overjoyed that Keisuke qualified for Tokyo University. When Keisuke was an elementary school student, the factory ran into financial difficulties. His mother turn her back on his father, got involved with a man and left home. After that, his father rebuilt the factory and raised him single-handedly. Keisuke is so set on Tokyo University because he wants to show the big companies which treated his father badly, his mother who forsook them and also the world what he can do. Indeed. He will lead the life of an elite from now on. On the day of the entrance ceremony in April, a guy appears in front of Keisuke. “I know all about what you did. Shall I tell the police that there was a suspicious-looking exam candidate who arrive late?” Tanaka Hiroshi (Shirota Yu) says. Although Keisuke feigns ignorance, he cannot hide his agitation. “I cannot forgive you.” Hiroshi who was rattled by that bomb warning had failed to qualify for Tokyo University. “I will make you pay for this.” He leaves with a defiant smile. Keisuke feels anxious and terrified beyond. Before long, Hiroshi starts following Keisuke around and demanding money from him. The amount of money increases bit by bit. Keisuke has no choice but to get involved in seedy part-time work. At this rate, he will tumble down rather than crawl his way up. He had believed that if he entered Tokyo University, a rosy future would await him. The happiness he desires is within reach in a different form. He must get hold of the life he wants with these hands again. So Keisuke makes a decision in order to get out of this fear. The outcome is what nobody can foresee.
Official Website: www.ntv.co.jp/hensachi

This blog contains information and musings on current and upcoming Japanese dramas but is not intended to be comprehensive.
View all posts by jadefrost →
This entry was posted in NTV, Summer 2014 Drama Specials and tagged Kuriyama Chiaki, Miura Haruma, Satsujin Hensachi 70, Shirota Yu, Takimoto Miori. Bookmark the permalink.