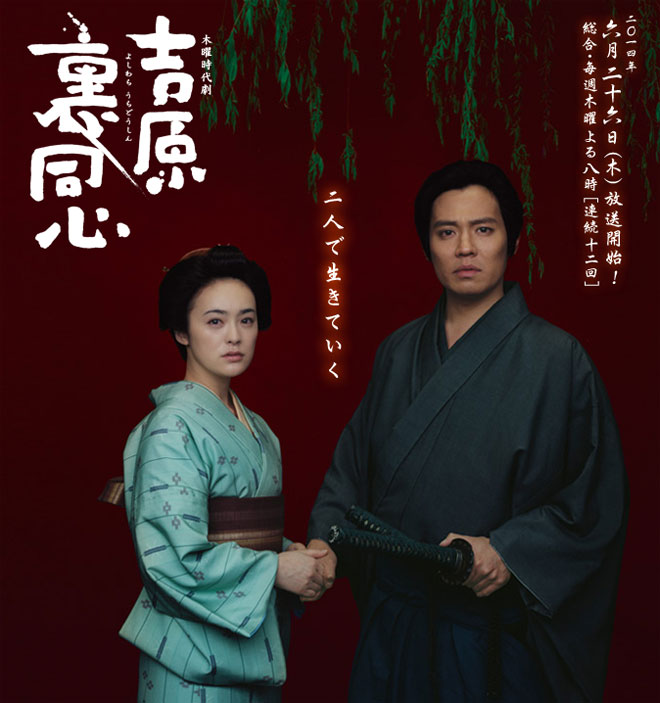 Story
Kamimori Mikijiro, a low-ranking samurai of Bungo Oka domain, learns about the cruel treatment that his childhood friend Teijo, who grew up in the same tenement house, has been receiving at the hands of her husband Fujimura Sogoro. He rescues her and the two of them run away. They flee their pursuers and after three years wandering in the northern provinces, Mikijiro and Teijo drift to Edo where Edo’s largest pleasure quarters, the Yoshiwara red light district, is. This is for the purpose of saving Teijo’s younger brother Shinichiro who has been forced to be Sogoro’s underling. At the Yoshiwara red light district, the Shirobe Club, a band of watchmen led by Shirobei, police the pleasure quarters. Shirobei who had seen Mikijiro’s sword skills in combat with Sogoro and his men, hires him as a bodyguard. Teijo also teaches the courtesans to read and write. Because Mikijiro now works for the club, the two of them are finally able to find a way out of their nomadic life and days of uncertainty, but dark shadows keep creeping up to envelope the women of Yoshiwara.

Characters
Koide Keisuke as Kamimori Mikijiro
A low-ranking samurai of Bungo Oka domain and a master of Satsuma Shigenryu swordplay. He rescues his childhood friend Teijo from her violent husband Fujimura Sogoro and they run off together to Edo. Fleeing from pursuers, they drift to Yoshiwara. He has a strong sense of justice. His sword skills are spotted by Shirobei. He starts working as a bodyguard at Yoshiwara’s Shirobe Club and punishes evil which Yoshiwara gets entangled in.

Kanjiya Shihori as Teijo
Kamimori Mikijiro’s childhood friend and a stoic woman of principles. Although she is not leading a stable life, she loves Mikijiro, who believes in “tomorrow”, with all her heart. At Yoshiwara, she has a warm relationship with the courtesans, and teaches them to read and write because she assumed her father’s debt of 30 ryo but the man she married treated her cruelly.

Kondo Masaomi as Shirobei
The seventh head of Yoshiwara’s volunteer band of watchmen, the Shirobe Club. He calls the shots in Yoshiwara and is charmed by the characters of Kamimori Mikijiro and Teijo. He spots Mikihiro’s sword skills and hires him as a bodyguard. Although he has a good natured and sincere personality, he is not above giving bribes to the constables of the shogunate. He is also the owner of the tea house, Tomoeya.

Nono Sumika as Usuzumi Dayu
A Miuraya courtesan who is the most popular of Yoshiwara’s 3,000 courtesans. She is the daughter of a samurai family. She attends writing practices at a temple school and develops a close friendship with Teijo. She also helps Kamimori Mikijiro from behind the scenes, and before long, she starts to have feelings for him … …

Minagawa Sarutoki as Fujimura Sogoro
A retainer of the Bungo Oka domain who is also a moneylender. He makes Teijo his wife in exchange for her father’s debt. After she runs away with Kamimori Mikijiro, he pursues them everywhere in order to capture them.

This blog contains information and musings on current and upcoming Japanese dramas but is not intended to be comprehensive.
View all posts by jadefrost →
This entry was posted in NHK, Summer 2014 Dramas and tagged Kanjiya Shihori, Koide Keisuke, Yoshiwara Uradoshin Series. Bookmark the permalink.