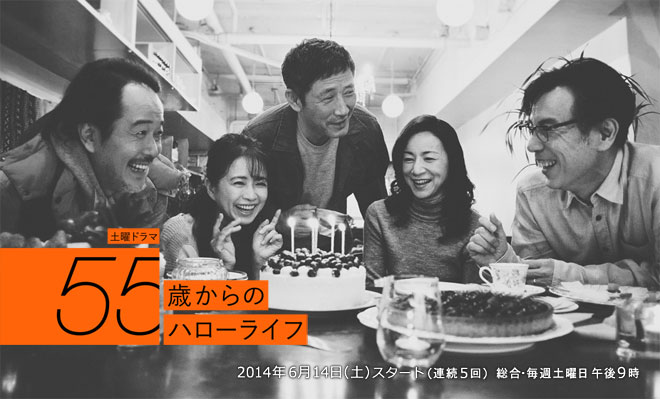 Story
A 5-part omnibus drama about the wishes of the middle-aged on growing old. Everyone has passed the halfway mark but despite their anxieties about the future, they search for new paths without flinching away from those insecurities. Reemployment, the death of a pet, spouse hunting in old age, love in old age, separation from a good friend. Is it possible to make a fresh start in life?

Camping Car
Broadcast: From 9.00 p.m., 14 June 2014
Synopsis: Fuyu Taro (Lily Franky), a successful salesman for a major furniture maker, decides to retire early at the age of 55. His sales style of earning money by pounding the pavement with trust and hard work as his motto has also become outdated. Reflecting on a life spent devoted to work, he now dreams of travelling around the country with his wife Nagiko (Toda Keiko) in a camping car. However, Fuyu’s plan for old age is opposed Nagiko who lives for attending drawing classes and producing paintings. She dislikes financial uncertainty and the loss of her own personal time. Because he has already paid the deposit, even his time is in limbo. Fuyu has no choice but to re-enter the workforce. However, reality is harsher than he imagined. His ineptness is pointed out by a young career counsellor (Kobayashi Takashika), he is also snubbed the company president (Nakamura Ikuji) of the business connection he goes to consult, and gradually loses his physical and mental balance.
Cast: Lily Franky, Toda Keiko, Ichikawa Mikako, Hashizume Ryo, Kobayashi Takashika, Tanaka Ryosei, Nakamura Ikuji, Pierre Taki, Hasegawa Hiroki

Pet Loss
Broadcast: From 9.00 p.m., 21 June 2014
Synopsis: 55-year-old housewife Takamaki Yoshiko (Fubuki Jun) lives happily with her pet dog Bobby, the Shiba Inu she decided to keep when her only son was posted overseas. She showers all her love on Bobby and her daily pleasure is taking a walk with Yoshida (Sera Masanori), a widower who owns a doberman, and Bobby. Yoshida, a famous designer, is one of the pet lovers in the neighbourhood that Yoshiko interacts with and she has faint feelings for him. But her husband Kohei (Matsuo Suzuki), who has retired from an ad agency, intrudes into her life. Kohei hates dogs and their relationship deteriorates. Meanwhile, Bobby is diagnosed with an enlarged heart. Yoshiko quarrels with Kohei, and shuts herself away in a closet with Bobby. Unwilling to sleep and eat, she nurses the dog as if her life depends on it. Kohei, who was initially indifferent to Bobby’s illness, cannot bear to see his wife like this, and also starts to help. But … …
Cast: Fubuki Jun, Matsuo Suzuki, Makino Nozomi, Ichiro Maki, Sera Masanori

Marriage Agency
Broadcast: From 9.00 p.m., 27 June 2014
Synopsis: Kawakami Akira (Asano Kazuyuki) faces repeated setbacks in his search for another job after retirement and his physical and mental state gradually suffers. His 55-year-old wife Shizuko (Harada Mieko) cannot tolerate watching him face the TV at home and mutter to himself all day ever since his retirement, and decides on divorce. She starts to live alone for the first time in her life as she works at a supermarket. However, Akira cannot give up on Shizuko and keeps sending mail to her. Wanting to meet a man different from her ex-husband and begin a new life, Shizuko registers with a marriage agency and repeatedly goes on blind dates. But she does not find someone she likes at all. Although she is also invited to a matchmaking party exclusive to members of good standing, she loses her nerve and leaves. When Shizuko enters the hotel bar at the same venue, she finds a man in his 30s crying alone … … He is Hayasaka Yoichi (Ikeuchi Hiroyuki) who has come back to Japan from Wilmington in the US to meet the girlfriend he has been having a long-distance relationship with.
Cast: Harada Mieko, Ikeuchi Hiroyuki, Negishi Toshie, Ando Sakura, Kushida Kazuyoshi, Denden, Iwamatsu Ryo, Muramatsu Toshifumi, Harumi Shiho, Jitsunashi Satoru, Saito Ayumu, Natsukawa Kanako, Asano Kazuyuki, Kusabue Mitsuko

Trouble Helper
Broadcast: From 9.00 p.m., 5 July 2014
Synopsis: Veteran long-distance truck driver Shimofusa Genichi (Kobayashi Kaoru) was retrenched by his trucking company at the age of 60 and has been doing irregular routes part-time. After his parents divorced when he was a child, he stayed with his grandmother who had been a diver, and grew up to be talkative. He now lives in alone in an apartment. What comforts him is reading books which began as a hobby. However, the loneliness of not having kin sinks into him day by day. One day, Shimofusa makes the acquaintance of Horikiri Ayako (Yasuda Narumi), a customer who speaks in a friendly way to Shimada (Maro Akaji), the owner of the second-hand bookstore he frequents. He falls in love at first sight with the elegant Ayako who looks like she has stepped out from an old movie. With his life of habit suddenly full of purpose, Shimofusa dresses himself up to pretend to look like a cultured man. They have repeated dates at a family restaurant and Ayako starts to become his idol. However, he is suddenly told goodbye. Unable to give up on Ayako, Shimofusa searches for her house, but … …
Cast: Kobayashi Kaoru, Yasuda Narumi, Arizono Yoshiki, Miyashita Junko, Maro Akaji

Sora o Tobu Yume o Mouichido
Broadcast: From 9.00 p.m., 12 July 2014
Synopsis: Indo Shigeo (Issey Ogata) was laid off by the publishing company he worked for when it went bust. He earns a living as a guide for a water works construction site. Although his dream to become a novelist has been shattered, he makes a point of keeping a dream diary every day. In his desire to protect his family, he battles with a worsening back pain in his 60-year-old body as he works hard, but lives with the fear that he may descend into homelessness. One day, Indo is accosted by Fukuda Sadao (Hino Shohei), who had been his good friend in elementary school. Fukuda says he is living in the exclusive residential neighbourhood in this area. However, one month later, Indo is summoned by a dying Fukuda who is seriously ill but has no one to turn to. Fukuda descended into homelessness due to debts he had during the bubble era. A disconcerted Indo is asked for a last wish. This reunion for the first time in 50 years gets him entangled in an unexpected situation.
Cast: Issey Ogata, Umezawa Masayo, Miho Jun, Fuse Eri, Matsuda Satoshi, Yamanaka Takashi, Hanawa Nobuyuki, Nagashima Shugo, Naraoka Tomoko, Hino Shohei

This blog contains information and musings on current and upcoming Japanese dramas but is not intended to be comprehensive.
View all posts by jadefrost →
This entry was posted in NHK, Spring 2014 Dramas and tagged 55-sai kara no Hello Life, Ando Sakura, Fubuki Jun, Kobayashi Kaoru, Lily Franky, Toda Keiko. Bookmark the permalink.